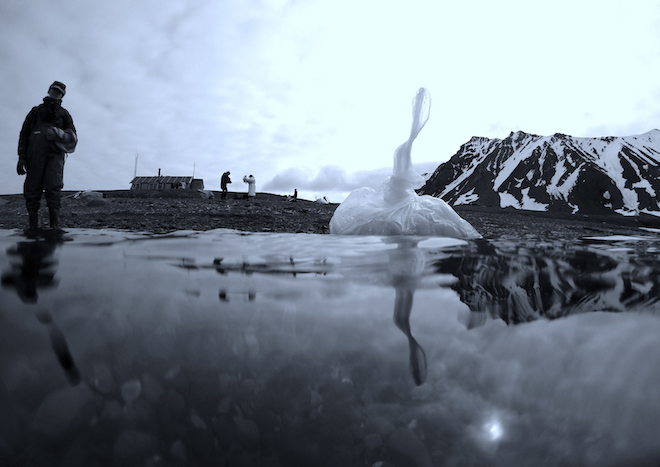 Over the summer at the Araluen Arts Centre visitors will be able to see an exhibition, Into Blue, from longtime local artist, Suzi Lyon, that features work she made over several visits  to the Arctic: sound recordings of an iceberg melt, glacial carving and glacial retreat, video projection of ice in its many manifestations; sea ice, glacial ice, icebergs, mountain ice and rime; large-scale ink drawings of arctic fauna and photographic prints. JIMMY COCKING, director of the Arid Lands Environment Centre, opened the show, putting it into perspective for our time and place here in the desert.

He began by acknowledging Arrernte elders, Traditional Owners and custodians “who for millennia have looked after this country we are lucky enough to call home”. He also acknowledged  current and future indigenous leaders “who are managing to walk in both worlds for the benefit of their people and the enrichment of our culture as a nation”.

The following is a transcript of his speech:-

I was asked by Suzi a couple of months ago to speak at this auspicious but also sombre event that is marking history as an impact of global warming. Suzi’s time in the Arctic has allowed her to capture the essence of what is happening to our planet, our home.

Dark oceans absorbing rather than reflecting the Sun’s heat, creating a feedback loop of more melting and more warming, and more rising of the oceans from where life began.

But it is not just the warming.

The acidification of our oceans by the increase of CO2 and other gases in the atmosphere is leading to the bleaching of coral globally and the decimation of our global fish stocks.

Things have been changing rapidly since the 20th century when consumption surpassed our ability to mitigate our impact and the escalation of the Anthropocene on our fragile world.

It’s hard to remain hopeful, with the next generation being handed a more dangerous and warming world, and with changes in government in the United States and the rise of the nationalist Right in response to the people movements caused by climate change and associated wars.

But we must … while we can still breathe the air and smell the sweetness of rain, while we can still talk with our neighbours and stand up against wrong-way corporate and government responses – we must organise ourselves to respond in a compassionate and loving way.

We have the ability to do something in our own backyards and workplaces, our communities and the broader region – we are far from the decision-makers but we can make our own decisions.

We could just give up and resile from the world, claiming it is too late for us to do anything. The Great Barrier Reef is already gone … but it’s not. Trump is the US President but China is using less coal and driving renewable innovation. Or that the Northern Gas Pipeline is already a done deal … but it’s not.

We can stop fracking here in the NT. We can, we just have to choose to do so.  We can choose to act in the face of projects and proponents driving climate changing pollution or we can attempt to ignore it at our peril

Suzi has brought home stunning images and footage from the front line of climate change. The melting ice caps is happening much more quickly than scientists have predicted and we have the evidence right here.

Science, arts and activism – business, government and community – we all need to work together to ensure a future is assured. The current trajectory of warming is between 4-6C, which spells complete destruction of natural systems and extreme weather events that will make human life very difficult indeed.

We need to hold our governments and their corporate donors to account. We need to ensure that our cities, towns and communities are designed and built to reduce our impact, not increase it. We need to recognise that we are the leaders, the community and the people that are needed to make a difference and do so.

I feel very privileged and honoured to be asked to introduce this exhibition and in the spirit of the intent of the exhibition I urge you all to get serious about climate change and commit to making a difference.

We are all in this together, we share this world with the past and the future. Please join me in applauding Suzi for bringing a message from the icy lands to here, our arid lands – our time is now and we must act accordingly.