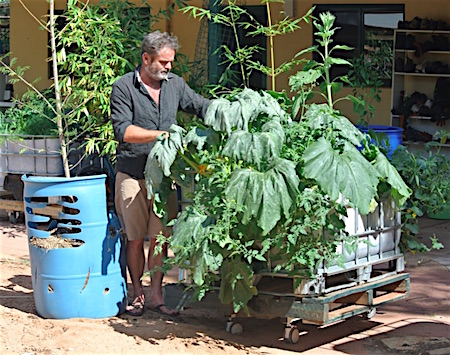 “Northern Australia has huge potential for development, particularly for agriculture,” said Minister for Agriculture, Barnaby Joyce last year, on occasion of the release of the White Paper on Developing Northern Australia by then Prime Minister, Tony Abbott.

And to underline that he’s thinking very big Mr Joyce added: “A four metre extension on the Lake Argyle spillway would increase storage capacity by nearly five million megalitres … this extension alone would make it the biggest increase in public water storage in Australia in more than four decades.”
By contrast David de Vries is thinking not small, but tiny.
And far from fields of farm produce stretching to the horizon, Dr de Vries grows his stuff in discarded plastic containers. The roots don’t go anywhere near the soil and the consumption of water is minuscule.
It’s a lot like mammoth centralised electricity power stations being replaced with thousands of solar cells on people’s roofs.
His “gardens” are even on wheels: “Mobility makes for easy delivery, avoiding frost, hail, extreme heat and, if a gardener dies or loses interest, you can take it to another householder who can carry on,” says Dr de Vries.
Like with electricity security, food security writ small creates independence for the user, provides fresh food and the pleasure of growing it.
And yes, you can do it in your back yard.

The arguments Dr de Vries (at left) presents against agriculture as we know it are compelling and frightening.
They range from mercenary marketing ploys through to trade regulations with unforeseeable consequences, both domestic and global.
In remote northern Australia, add to that the savage weather patterns, 10 degrees hotter than in moderate climate zones, and because of global warming, exposed to ever more violent fluctuations, heatwaves and hail.
A road train rolling over, or a bushfire, can starve a town of some foods for days.
And even if it gets here on time the stuff has been in cold storage for weeks: Not a patch on the fresh asparagus or banana that you can grow at home.
“Kids should get five plus veg a day,” says Mr de Vries. “Some bush kids are lucky to get five a month.” 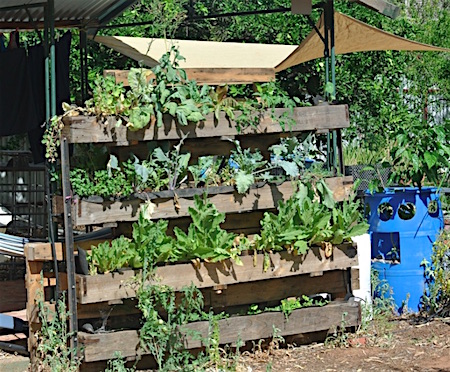 In any case, large scale agriculture remains doomed in the absence of a reliable local workforce, while backpackers have to be brought it to do the job as locals prefer to indulge in what Noel Pearson calls passive welfare.
Dr de Vries has an impressive CV: A B.Sc (Hons) from the University of Queensland, Ph.D. from the University of Melbourne and a B.Nat from Southern Cross University.
His hands-on work record spans dozens of outback communities and organisations in the NT, WA and NSW and covers health, land and business planning, starting in 1986.
He grows his fruit’n veg in large plastic containers used to transport a variety of chemicals to Alice Springs, such as chlorine or detergents, and are then discarded.
In the bottom of the growing boxes are more discarded plastic containers making a bed on which sits what the plants are growing in: a mixture of mostly composted cow manure and straw with vermiculite.
There is an outlet about 30 centimetres from the bottom to keep the water level at the optimal height.
The roots reach down to get water at the rate they require. Unlike in is the case with planting in soil, no water seeps away and is wasted.
The growing containers sourced from around town come in a variety of forms, including wooden boxes in which glass is transported to Alice Springs.
Mr de Vries cuts patterns into the blue plastic containers, growing mulberries, grapes, asparagus and cape gooseberries, for example, or kale, cucumbers, tomatoes and zucchini. 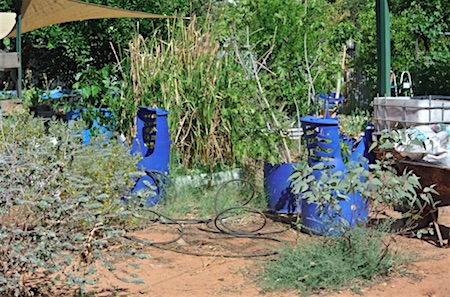 The containers are tall enough to prevent kids and dogs from interfering with young plants.
Does it work? Pretty well. Mr de Vries planted trees for 65 town camp houses. 40% are surviving.
New houses built during the Intervention got two fruit trees each. None survived, he says.
He advocates agriculture from the ground up. “We can grow an enormous range of fresh organic food right here and generate real improvements in everyone’s health.
“There is little point in offering endless courses and training when the graduates have nowhere to go and are not given resources for a home garden,” he says.
Dr de Vries subscribes to a belief that small is beautiful and that “tree by tree, backyard by backyard we can achieve food security in The Centre”.

• Dr de Vries inspecting zucchini plant in wicking garden bed that also includes sunflower, beetroot, lettuce, tomato, basil, cucumber, nasturtium, okra and, as a long term dominant feature a clumping edible bamboo. In the background are other beds featuring mulberry, bush raisin, silverbeet, mangelwortel, kale and other species of bamboo grown for their shoots. Wheels provide a means of moving with towards gentle sun and rainfall events and away from harsh conditions and hale.
• A vertical bed built with discarded shipping boxes and pallets and sealed with pond liner to create wicking reservoirs in each channel.