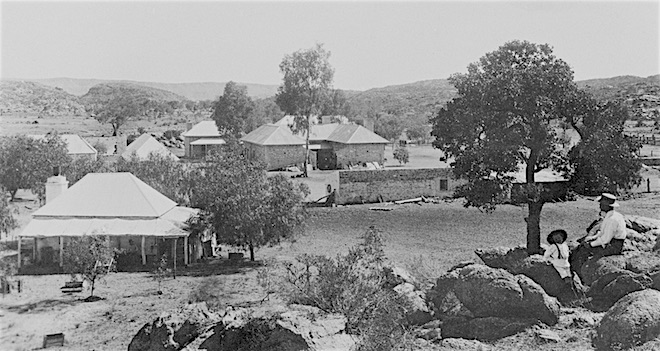 Above: Frank Gillen and his son Brian at the Telegraph Station. NTAS, CCNT, NTHP 172

Reading Stuart Traynor’s Alice Springs drives home just how heavily imprinted on the present town map is its colonial history. Dominating local place names are the white men of the frontier and the developing town. As I started the book I feared that that would be its shape, with chapter titles such as ‘Arguably Australia’s greatest explorer’ (Stuart), ‘A positive and popular man’ (Todd), ‘The Giant of the Interior’ (Flint). 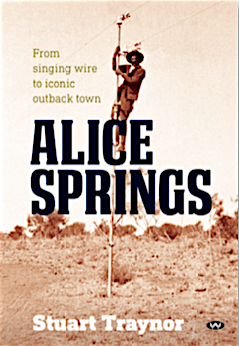 But these early pages belie the substance of the book, which, as the historical archive yields more and Traynor’s research deepens, becomes a multi-faceted account of the first 100 years of European presence, structured around the building and operation of the “singing wire” (the Overland Telegraph Line) of his subtitle.

His narrative is alert to Aboriginal prior occupation, their resistance as incursions on their lands by men and animals grow, building to episodes of bloody conflict – attacks and excessive reprisals – and decades of oppressive policy. Alongside there is also a counter-story of human relationships across the cultures that were more open, curious, respectful, affectionate, with some determined anti-racists and advocates for greater justice and opportunity.

The account is alert also to women, black and white. Where the record allows, women emerge more fully than the ‘Mrs X’ identity into which so many have disappeared. This for instance was the case with Mrs Flint, wife of the ‘Giant’ and first white woman to reside at the Alice Springs Telegraph Station. We don’t learn much beyond her age and full name – born Florence Clementine Madeley – and eventual remarriage, but this is more than has been offered in a published history to date  and took a lot of digging, says Traynor.

Her stay at the Telegraph Station was brief. She and husband Ebenezer arrived from Adelaide in late May 1887, having married there in the January; by mid-July Ebenezer was unexpectedly dead. Premature death is the fate of many people in the narrative; its chronicling underlines the risk of their enterprise and their vulnerability.

Traynor signals his interest in women from the start, heralding the arrival of the Europeans in the Centre by recording the birth of a girl, Atalanta Allchurch, aboard a ship coming from England. He later picks up her story when she arrives in the Centre as the wife of telegraph stationmaster Tom Bradshaw, paying as much attention to her, her children, their governesses and the Aboriginal women who worked for the household as he does to the husband.

Governess Mabel Taylor’s letters and diary furnish some lively accounts of people and daily life, and Amelia Pavey, granddaughter of Unchalka (Arrernte elder and informant of Frank Gillen), emerges as a strong personality.

Another woman Traynor brings to the fore is Ida McKay, nee Smythe, married to stationmaster John McKay. She became a prominent advocate for Aboriginal rights in the 1920s, her contribution to Territory history overshadowed by the more colourful and controversial Olive Pink who arrived in Alice Springs in 1930. 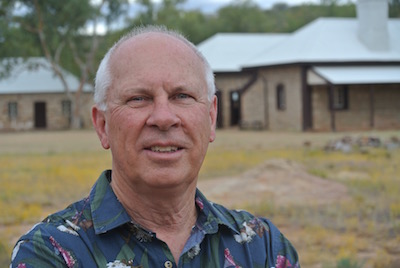 Traynor, a former long-time Alice resident (at left), writes that interest in history and heritage is a strong feature of the contemporary town. His library talks about the book were packed and the launch at the Telegraph Station attended by scores of people. But stepping back from this circle of the passionately interested, the evidence appears to the contrary.

Much of the built heritage of the town has been destroyed. What has not been damaged and effaced of its pre-settlement heritage, held in the land itself, is under constant pressure. Of the encounter between the cultures, there is very little acknowledgement. Memorialising of the external conflicts in which Australia has been involved has considerably expanded atop of and around Anzac Hill. The area’s sanctity for the Arrernte is ignored. Even flying the Aboriginal flag there has been too much of an ask. There is no memorial for the Aboriginal frontier dead. There are no streets named for them.

The difficulty the town has with this dimension of its history was evident in the saga around the Stuart statue. I expected Traynor, who was called upon at times to comment on the historical claims and counter-claims at the height of this controversy, to write a more complex chapter on Stuart. This is not the case. The encounter with the Warramunga at Attack Creek is dispensed with in one sentence and there is no other discussion of Stuart’s attitudes towards or interaction with Aboriginal people. There is some mention of native foods but no discussion of where this knowledge came from.

In the context of the whole book, it becomes obvious – and the author confirmed – that he wanted to get to his core interest, the Overland Telegraph Line and the Telegraph Station in Alice Springs, as quickly as possible.  And that in terms of black-white relations there would be much more to tell as that history progressed.

In this early period Traynor comments that the Arrernte people were “remarkably tolerant of the intruders” while the official approach towards them, enunciated by Todd in 1870, sought to avoid conflict: they were “to be treated kindly but firmly”; if “a native camp or burial ground” were met with, their property was to be left “untouched”; and, it was “strictly forbidden” to shoot at them, “except in the last extremity”.

The avoidance practised then was aided by the good weather conditions of the 1870s, observes Traynor. This changed during the sustained dry period of the first half of the 1880s. In 1883 there were 214 consecutive days without rain, yet at that very time Bill Benstead was moving 5000 cattle into virgin country north of Alice Springs.

Cattle spearing increased, followed by “inevitable reprisals”: “The 1880s became a dark period in the region’s history with many Aboriginal people dying at the hands of cattlemen and the police.” Willshire is notorious in this regard. Less well known is the role of men like Benstead, whose memory is commemorated locally by names of a street, a creek and a mountain. He joined Willshire’s colleague Wurmbrand and trackers in reprisals for a threatened attack at Glen Helen homestead (not his although his own at Anna’s Reservoir had previously been attacked and two men seriously injured). Wurmbrand’s official report was one dead. Missionaries at Hermannsburg heard the figure was 17. This was confirmed years later by Benstead when he wrote cynically in his memoirs, “I am sure that seventeen out of this lot never killed or troubled anyone else. It was a lesson they never forgot.”

Traynor’s narrative weaves in and out of the encounter between settlers and Aboriginal people. He just as keenly follows the developments in communications technology and the way that changed life for everyone on the frontier, as did the developments in transport. He picks up and fills in with as much knowledge as his search of the archive will supply the human stories that drove it all, on the ground and from afar, and right across the social spectrum, from the stationmasters to the cooks and gardeners.

It is only the second published general history of Alice Springs. The first, by Peter Donovan, is now out of print, so Traynor’s book fills a gap. His account finishes in 1960, while Donovan’s continues into the 1980s, but where they overlap Traynor has been mindful to not replicate the earlier book. If readers access both, they should find them complementary. In relation to the history of the Bungalow,  the home for ‘half-castes’ which after iterations in town and at Jay Creek moved to the Telegraph Station (following relocation of the post office), he hopes to have offered a more comprehensive and coherent account than published to date. 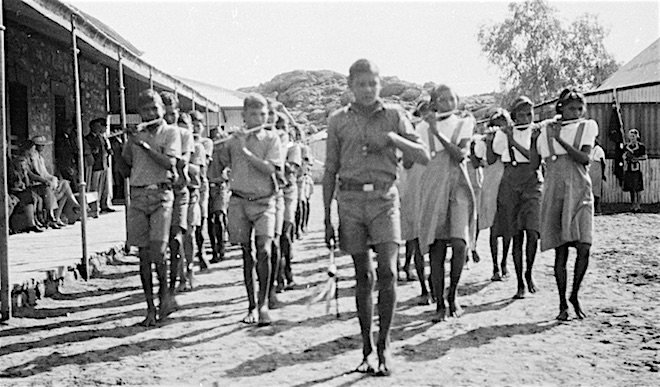 He tracks the development of the policy of removal, from its inception by Baldwin Spencer through its early implementation by Cecil Cook, both in their roles as Chief Protectors. Whatever the justifications and claims for the policy and practice, Traynor makes clear his own view, that overwhelmingly the pain and loss for the children and their mothers and the long term impact on Aboriginal family life outweighed any benefit.

Hetti Perkins, Topsy Smith, Father Percy Smith, teachers Maisie Robb and Wally Boehm, are among the admirable, moving adult figures in this story. Superintendent Freeman is probably the worst, a bully and drunk, child abuser and rapist. One of his victims, a 16 year old girl, eventually stands up to him, her testimony backed by five other girls and Hetti Perkins (events commemorated in the production, Bungalow Song). From today’s perspective Freeman got off lightly (gaoled when he couldn’t pay the fine, released after two months), but the case was a landmark for the time.

Among other Bungalow children, Joe Croft’s story stands out for the success he achieved. Taken from his Gurindji mother at aged four, he went on to become the first Aboriginal person to enrol at university (his studies cut short by joining the army in 1944) and later becoming an important leader in Aboriginal cultural organisations. Jessie White’s story is harder. Domestic work was all that she was ever trained for, “slave labour” as her daughter Cynthia describes it. Jessie was not only taken from her mother (Carrie, sister of Hetti), but had her own three sons removed, to her lasting distress.

When the Commonwealth managed to get the churches to take over the care of removed children, the Telegraph Station became the Bungalow Aboriginal Reserve, intended as a ration depot for the Aboriginal settlements that developed post-war, as well as a temporary Aboriginal camping area. It soon became a quasi-settlement itself, with some 300 residents, including 90 school-age children who were supplied with three teachers, until in 1960 they were all moved to the newly established Amoonguna.

In town, the white population grew quickly once the railway arrived in 1929. During World War II, some 200,000 troops passed through the town, with as many as 5000 at a time camped here. This stimulated rapid infrastructure development. By the end of the war, town residents had the benefit of electricity, piped water and long-distance telephone communications.

Social relationships had also shifted. In 1939 the Commonwealth’s policy for Aboriginal people moved from isolation and protection to assimilation, with citizenship the aim. Of more immediate impact, men who enlisted were free of the oppressive control of the Aboriginals Ordinance, although others were still subject to it and required a permit to be in town unless for an emergency. Traynor records prosecutions for breaches reported in the Centralian Advocate in 1951.

This obnoxious situation is within the experience of older people alive today. The tensions underlying it, which have their roots in the frontier, are still playing out, in the design, regulation and policing of public places, in the fortress mentality of many private spaces. In this respect as in so many others, to read Stuart Traynor’s Alice Springs is to not only better know our town’s past, but to better understand its present.