Above: Cover image of the first edition of Alanya.

The place is Warburton Ranges on the Ngaanyatjarra lands, about 1000 kilometres west of Alice Springs, home to some 800 people. The words are those of 19 year old musician Grenville Westlake Porter, who heads up the local Red Sand Beat Band, and they reflect the spirit of a local youthful creative outpouring known as Alanya.
The word means “looking good”, but also more than that, said Brett Jennings, music and fashion mentor in the youth arts program standing behind Alanya, called Wilurarra Creative.

Speaking at the launch of Alanya, the book – in fashion magazine format – he said the title also means “to find someone to share your dreams. In Wilurarra Creative terms it means to ‘dream dreams’, ‘to make your dreams come true and bigger’.

“Wilurarra Creative is a place to be where you can sort out your stress and problems and find new things to do and be a better person. As a key team member, I see this as a beginning, coming to something big for younger and older folks of Warburton, not only Warburton but to other places everywhere.”

Above, on stage at the Desert Mob symposium, from left: Adele Jennings, Kate O’Connor, Delvina Lawson, Brett Jennings, Silvano Giordano, and Starlady. Below: Stills from the powerpoint presentation.

The launch took place during the recent Desert Mob Symposium, held at the Araluen Arts Centre. On stage with Jennings were two young women from the team, Delvina Lawson and Adele Jennings, but they did not speak, following the distressing news of a death in the community, the sister of another team member.

The event was dedicated to the families in this tragedy, as “a memorial to the young woman who died and also to all the other young people that we lose and have lost … your work is part of the legacy of Wilurarra Creative”, said Silvano Giordano, director of the program for nearly six years.

On the final page of the magazine are the names of two young people who passed away during the two year life of the project. And now another: three young deaths speaking starkly to trouble in the small remote community. 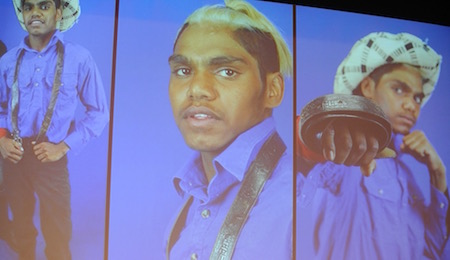 Also on stage was Starlady, mentor and artist in the Wilurarra Creative hairdressing and fashion program for seven years. She spelled it out: “Suicide in particular has impacted upon young people and their families. It’s one of the reasons why we need to invest in youth arts and young Indigenous people across the Northern Territory and wider central deserts.”

She stressed the importance of recurrent funding to maintain programs. Wilurarra Creative grew out of Warburton Youth Arts created in 2004, its long life in contrast to the frequent axing of programs and an underpinning of its success.

“In Australia young Indigenous people aren’t given many opportunities,” said Starlady. “In terms of the popular press where did Ngaanyatjarra youth see themselves reflected positively?

“I would ask us as artists and arts practitioners, are we considering the impacts that racism and stigma are having on young Indigenous people’s mental health and well-being?”

Young people, 16 to 30 year olds, make up over 40% of the Warburton community. Wilurarra Creative has got them involved in music production (practice, concerts), photography, design, fashion, metalwork, sculpture, screen-printing, and community events. The lively results are recorded in Alanya.

It also reveals the seeds of a social enterprise. Kate O’Connor has been going to Warburton for the past five years, mentoring the young women in visual communications, art and design.

In talking with them about issues in their lives and on the community, it emerged that they wanted to express their ideas in the style of advertisements, delivering a short message. Together they went through the process, starting with the story, developing a storyboard, illustrations, copywriting and actually producing those ads  – getting props, setting up photo shoots.

Again the results are in Alanya: ads about safe driving, gambling, in the voice and style of local young Ngaanyatjarra people. The ads were also printed as posters and put around the community. The local health service, Ng Health, saw the work and it led to a professional commission, to produce a smoking campaign. 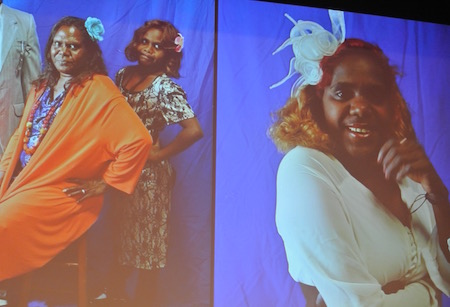 The idea now is for Wilurarra Creative to offer a creative service to businesses and organisations, developing campaigns for the messages they want to convey and generating local employment along the way.

It is also a way, as Starlady pointed out, “for Ngaanyatjarra youth to share their stories and culture with each other and the world”, which has “incredible potential to provide cross-cultural education and break down barriers between Indigenous and non-Indigenous Australians.

“Fashion and hairdressing are fabulous tools to transform and empower yourself,” she said. “In my youth I used creative self-expression to heal the trauma of my experience through facing discrimination and stigma. I discovered a resilience, an inner strength through being fabulous and flamboyant.

“This was significant because I thought society was telling me that I was worthless but I knew inside myself that I had something special to share with the world. Youth fashion in Warburton is about sharing this feeling with young people, that they are beautiful, creative, and that their images are unique and powerful.”

Alanya also does honour to traditional Ngaanyatjarra ways. There’s a two-page spread on traditional hair and beauty, with older residents recalling the way they did their hair in their youth, for instance, with little gum nuts folded into the hair and sitting across their foreheads.  There are stories in Ngaanyatjarra – “keeping our language alive”; about eating bush tucker – “kangaroo,emu, turkey, goanna and the berries from the bush … healthy for our people … healthy for all people”; and stories about country, such as the Warnampi in the creek. And a striking two page spread celebrates Rirrangkatja Tjukurrpa: “where dreaming starts and ends and always belongs.”