Gunner on fracking: Change of words or heart?

What “exactly” did Chief Minister Michael Gunner say about fracking yesterday and what had Labor promised during the election campaign?

“We have implemented a moratorium on hydraulic fracturing for exploration and extraction. It is exactly what we promised to do before the election. And it’s exactly what I announced today,” said Mr Gunner yesterday.

No, it’s not, says Naomi Hogan from the Lock the Gate Alliance: Labor’s fracking policy says the party will “implement a moratorium covering all unconventional gas prospecting exploration and extraction activities”.

There is a big difference between that and “hydraulic fracturing for exploration and extraction,” says Ms Hogan.

Contrary to the published Labor policy, resource companies, so long as they don’t frack, will still be able to access cattle station land for exploration, seismic surveys, road building, drilling core holes and so on, in preparation for fracking.

The question could be asked, why bother if they can’t be sure they can frack at the end of Mr Gunner’s moratorium?

Another question should be: Are they being encouraged to think that the carefully selected “independent expert advisory panel” promised by Labor will, in the fullness of time, come up with the right answer?

Or should we ask, suggests Ms Hogan, why did the Chief Minister change the wording – and then pretend he hadn’t?

To be sure, Labor had created the impression that if you wanted to stop fracking, in The Centre you voted for Dale Wakefield, Scott McConnell or Chansey Paech.

Yet as many fracking issues remained unclear, the candidates were left to ad-lib as best they could in daily encounters with voters who had put the controversial mining process close to the top of their priorities.

So what “exactly” is going on?

Following a landslide victory that can at least in part be attributed to the public perception that Labor will stop fracking, and just four days after their first Cabinet meeting, the Labor Government is in deep water with some of their bedrock supporters, the environmentalist sector in Alice Springs.

And if that comes as a surprise it shouldn’t: Mr Gunner has been avoiding coming clean on fracking for at least a year.

He has steadfastly refused to explain what he means by moratorium, public consultation and independent advice, while merrily spruiking these terms.

The fracking issue came to a head a year ago, especially in The Centre where groundwater is the only water we have.

The Giles Government was pressing ahead full steam with a pipeline and fracking was going to be part of it – no apologies offered.

Most emerging Independent, Green and 1Territory candidates nailed the fracking issue to their mast. For 1Territory it became the top one.

It was in October last year that the time had come for Labor to show their hand on fracking, to both the public and the oil companies.

The timing was critical because the mining companies, which were lining up to do deals with the Giles Government, deserved to know what would happen if Labor got in.

It would not be a good look to land some nasty surprises on the resource industry without proper notice. This could have painful litigation consequences.

Nevertheless, that seems to be exactly the place where Mr Gunner landed this week, if he were to say “no” – inviting the question whether he has been walking on both sides of the street.

The Alice Springs News Online examined the situation in a report on October 22, 2015. 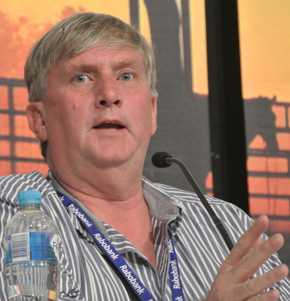 Mr Gunner had repeatedly declined to be interviewed on the subject, but Mines Department Ron Kelly (at left), who was sacked by Mr Gunner last week, was happy to talk.

Mr Kelly told the News the Mines Minister has absolute control over mining and exploration. He or she is empowered to refuse the renewal of a production licence, without risk of litigation, even if all conditions of the permit have been met. Licenses are issued for five year terms.

At that time Mr Gunner could have said to the frackers, sorry, our mob doesn’t like what you guys are doing, feel free to spend your money, build a pipeline, but in five years or sooner, when your permits run out, we’ll shut you down if we get in.

Mr Gunner obviously didn’t said anything of the kind to the oil and gas industry although the very people attacking him this week, a year ago had urged him to “clarify his position as soon as possible”.

The Centre started the electoral term in 2012 with CLP Members in all seats and finished it with none, partly because fracking had grown into an issue across a wide political spectrum.

Has the region bought a pup?

As we speak we have no idea how long Mr Gunner’s moratorium will last, who will be the independent experts he has in mind, who will be appointing them, what is the point of yet further public consultation (is the majority going to rule? Is he having public meetings with a vote at the end of them?)

Groping in the void, here’s what two of the local candidates said in answer to fracking questions:-

In a report we published on November 6, 2015, Mr McConnell (Stuart, at right) made it clear that he was giving mostly his own personal view on fracking, with a smattering of his party’s current position, so far as he could make it out. It was a nuanced opinion he gave.

“We need to be clear about any impact on the tourism and pastoral industries and Aboriginal people living on country,” he says.

“The welfare of all those comes first. I’m quite concerned about the implication of widespread fracking.”

The use of water is “extraordinary, astronomic” and we need to find out a lot more facts: “It’s very convenient to run a lot of adverts, that we’re using world’s best practice, and so on, but I have yet to be convinced.

“We’ve done some types of fracking and I’m not a rule-in, rule-out person. It depends on science and on location.”

Asked whether Labor would stop fracking by not renewing permits, Mr McConnell said: “That is an issue for the leadership of party. These are very legitimate questions.”

He also said the proposed pipeline is a “short sugar hit” because materials and highly specialised workers and materials will need to come from interstate and overseas to build it.

We spoke to Mr Paech (Namatjira) on August 1, discussing the possibility of the “two-year” moratorium (as it was referred to just before the election) being extended if the public did not want fracking.

He said: “I imagine that would come back to Territory Labor at its annual conference and they would discuss it and make a decision by which we would then be required to abide. 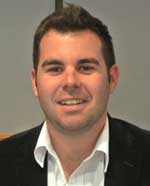 PAECH (at left): I don’t have a yes or no answer to those questions. We must get this development right because this is also about protecting thousands of jobs, pastoralists, horticulture, agriculture.

NEWS: What are the regulatory boxes that need to be ticked for the party and its Parliamentary wing to accept fracking?

PAECH: Guarantees that our water supply is not put at risk is one example.

NEWS: The industry will no doubt say “we are not going to put your water at risk”. Will inspectors for each and every well site, who are independent from both the government and the industry, be a condition required by Labor? Professor Tina Hunter described that as essential.

PAECH: There need to be stronger regulatory provisions. 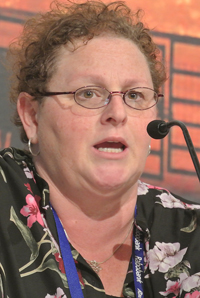 NEWS: I am asking you about that particular one, the one advocated by Dr Hunter (at right).

PAECH: The ALP is very firm about regulatory requirements.

NEWS: What about that particular requirement? Would it be a condition for fracking being permitted by a Labor Government?

PAECH: It should be seriously considered at the time. As a personal view, I think it should be a part of the regulatory regime, but that’s a matter for the membership and the Parliamentary wing. It is something I would advocate for.

NEWS: What else should be required?

PAECH: The oil companies would have to guarantee for the lifetime of Territorians that they will replace any water supply they destroy.

NEWS: What sort of guarantee would that be? Companies go broke and disappear. There are many stories about the failure of mining companies to rehabilitate sites.

PAECH: This is a very interesting area. There would have to be some form of compensation. Is the government that allowed it responsible? Companies go into liquidation, administration … And the price of gas is not what we originally thought it was. There is a glut.