With the possibility of as many, if not more Independents than Country Liberals in the Territory parliament, the Independents have already begun discussions on forming a coalition to take on the role of Opposition.

Robyn Lamely (pictured), who held onto Araluen as an Independent in Saturday’s wipeout for the CLP, said last night that she, Gerry Wood, and Kezia Purich would talk more in a phone hookup today about how that could work.

On Saturday Delia Lawrie, former Labor leader, looked like she could retain Karama as an Independent but on yesterday’s updated figures she is trailing Labor’s Ngaree Ah Kit, 1571 to 1604. However, two other Independents are in the lead: in Blain Terry Mills, former CLP leader, with 1548 votes to Labor’s Damien Hale on 1447; and Yingiya Mark Guyula in Nhulunbuy, in an upset for Labor, is heading Lynne Walker, deputy leader, 1577 to 1542.

Said Ms Lambley: “There’s no talk of a party being formed but I think we can work together … retaining our independence at all costs but working together to hold the Government to account.”

The critical advantage of being able to form an Opposition would be to gain the resources that go with the role – the assistance of staff, the extra travel entitlements for members with shadow portfolio responsibilities.

“None of us expected to be in this position. When you put your hand up as an Independent you almost forgo those sorts of roles. But we’re in a unique situation, we have to come up with a unique model.

“Michael Gunner [incoming Chief Minister] has been advised by several of us that this is a possibility and he’s very open to assisting us, he says, to function as well as we possibly can in Opposition. He could have 18, 19, 20 Members of parliament. It’s in his best interest, I think he understands, for there to be a strong Opposition of some kind.  Otherwise there’d be no real debate. That’s what we all desperately want.”

Ms Lambley said Mr Wood’s ideas about consensus government, which he brought back from a visit to Canada, will be very helpful in working out how the Independents could function in coalition as an Opposition.

Parliament would also require an Opposition leader, a deputy and a whip. These roles could possibly be rotated every 12 months, said Ms Lambley.

“That would keep it very democratic. This is not about personal power, but about the functioning and philosophy of the model.”

Alice Springs News Online asked Ms Lambley if the Independents would also talk to the remaining CLP members about operating in a coalition Opposition.

“Possibly,” she said. “We’re not ruling anything in or out.”

She expressed respect particularly for Lia Finocchiaro who has held her seat of Spillet for the CLP. But it is hard to imagine a collaborative relationship between her, Ms Purich or Mr Mills with former Chief Minister Adam Giles if he manages to scrape through in Braitling; consensus has certainly not been his style. 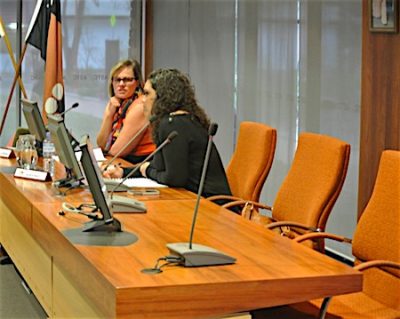 Meanwhile, the Town Council must wait seven days before discussing the vacancies that may have arisen as a result of three councillors standing down to contest the Territory election.
Right: Empty seats, normally occupied by Chansey Paech and Eli Melky, alongside Councillors Jade Kudrenko and Jacinta Price at last night’s council meeting.
Only Chansey Paech has been successful in his bid.  Technically, it would be possible for him to keep his role councillor as well as his seat in the parliament, said CEO Rex Mooney, but this seems highly unlikely.

A decision by council to hold a by-election to fill his vacancy also seems unlikely, given its expense. Council is not obliged to fill the vacancy if there is less than 18 months to go before a full election (due next March). Steve Brown and Eli Melky are expected to apply to be reinstated as councillors.

The Territory election will be declared at 10am on Monday, September 12, after the counting of postal and absentee votes and a full re-count where the margin is less than 100 votes.