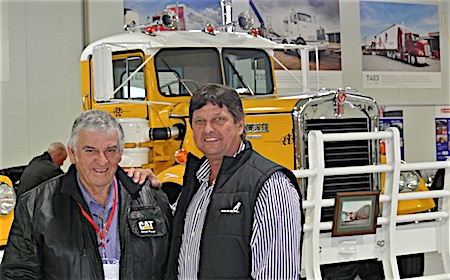 A Broken Hill trucking dynasty going back to 1911 was honoured when a third and a fourth generation member were declared Industry Icons at the National Transport Hall of Fame National this morning.

They received the honour before 560 delegates at the hall’s 21st annual reunion.

In these 105 years the company has grown from a one truck operation to being general contractors in mining and heavy haulage, bulk transport and earth moving.

It employs 540 people and operates some 900 items of plant and equipment, including six aircraft, in a 750 km radius from Broken Hill, says Steve Radford.

His father, Gary, says the founder, Les Radford, set up as a builder in Silverton, now much used as a movie location, moving houses on steel wheeled jinkers to what is now Broken Hill.

He later became active in the setting up of the mines, doing mainly excavation work, as well as re-loading and re-milling ore.

Much of the original fleet were ex-Army Blitz trucks and winch-driven loaders. 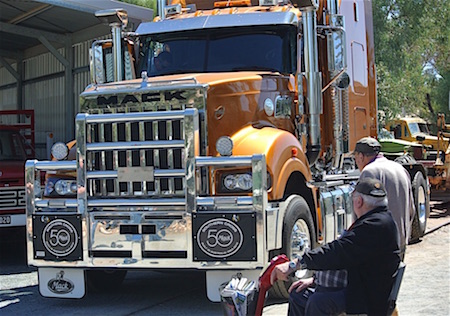 Fast forward 100 years and the gear has changed, and so have the language, the methods and the priorities.

Trucking in Australia is in a transition period, says Steve Radford.

“We’ve installed rollover protection for our drivers. We’ve gone through fatigue management and training. Our drivers now wear glasses which in the event the driver is going to sleep and blinks, they will set off an alarm.

“We track our trucks via satellite, monitor, track and identify locations of trucks, speed and engine temperatures, all in real time.

“We have road friendly suspensions –airbags – and work with them for higher carrying capacity.

We asked Steve Radford, as rail is about four times more fuel efficient than road, how come there are still any trucks in use?

“Trucks are more positive, from point A – loading – to point B – delivery. You can track that load for the customer, and it’s more personalised. The care factor, the customer service, is better,” he replies.

Says Gary Radford: “Our trucking is not from capital city to capital city. It’s to mining and other sites where it is not viable to put in rail. 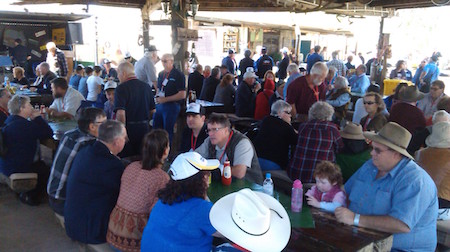 “Rail has been tried for long-haul, such as Adelaide to Darwin, and there are a lot of trucks still on the road.”

Gary Radford says there could not be a better place for the Hall of Fame than in Alice Springs: “Because of the climate, you won’t find the rusting of the vehicles like you will in a capital city on the coast. It’s a darn good place, and the timing is right for a holiday. With the big displays from the major dealers, and the volunteers, it’s just superb.”

PHOTOS: Top – Gary and Steve Radford with a model 1966 Kenworth Seattle which is the first big truck bought by their firm, in 1974. It has just come out of service, after doing an estimated two million kilometres, and now lives at the National Transport Hall of Fame in Alice Springs. Middle – two senior truckies feast their eyes on a Titan Mack prime mover custom-built for Steve Radford: Rated at 170 tonnes pulling capacity (three trailers), automatic gearbox, 2000 litre tanks, burning a litre of diesel every 1.42 kilometres, and costing $420,000. Above – Delegates at lunch today in the Bush Kitchen.