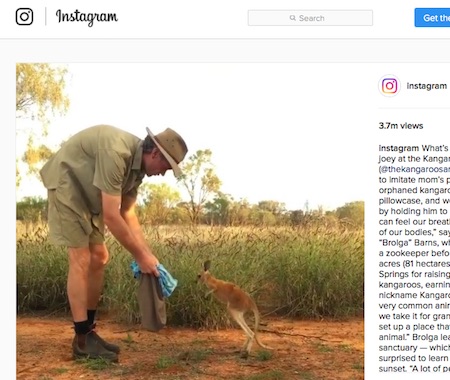 On the long, hard road from putting a 2.2 kilometre mesh fence around a 25 hectare bush block, with his own two hands, to this week getting millions of hits on Instagram’s own home page, Chris “Brolga” Barns never lost faith in his dream of creating a sanctuary for injured kangaroos.

He was joined in the past few years by his wife, Tahnee Passmore-Barns, who is the progeny of another commercial self-starter family in Alice, the creators of Centre Bush Bus. She is now the general manager of this multi-million dollar operation, as well as of The Kangaroo Sanctuary.

Her father, Alan Passmore, was inducted into the Transport Hall of Fame this morning.

Ms Passmore-Barns was clearly delighted to email her friends this week: “Very exciting news! We have just had our Kangaroo Sanctuary featured on Instagram’s own Instagram site. Great for Alice Springs and Australia as Instagram have over 184 million followers!

And a personal message from Instagram says: “I hope you’re pleased with the feature! It’s been a real joy following the Kangaroo Sanctuary and to learn more about your great work.”

In the half-decade leading up to all this, the nickname “Brolga” (inspired by his long legs) changed to “Kangaroo Dundee” as Mr Barns starred in a BBC TV series that was broadcast around the world.

Camels have now joined ‘roos in the sanctuary and the animal hospital is nearing completion.

Lesser men would have thrown in the towel when the tourism industry – the local lobby as well as the NT government instrumentality – gave Mr Barns the cold shoulder. 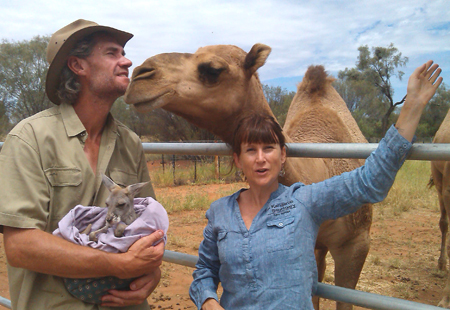 On May 12, 2011 we reported: “The groundbreaking character of his venture notwithstanding, [Mr Barns] gets no support from the tourism lobby, which is partly government funded.

“But while his brochures are not on display at the official visitors’ centre, they are in accommodation houses.

“And Brolga’s fame is spreading through TV documentaries: he’s featured in 20 so far.

“This international promotion of the region no doubt has spin-offs for his peers in the tourism industry who are showing him the cold shoulder.

“Mr Grigg says his group, which has 460 members, is a ‘membership based organisation’ and if it made concessions to one member then all others would expect the same.”

Today this is water under bridge – to a point. The combined enterprise, through Centre Bush Bus, whose sunset trips to the sanctuary are always sold out, is now a member of Tourism Central Australia.

But Mr Barns says it was a poor call for the organisation at the time, trying to extract a $460 membership fee, while he was sleeping rough on his block, and working in the town council’s outside workforce, scraping together a few dollars for his dream that turned out to be a great winner for the town and the industry.

“They showed no interest in helping a small business starting up,” says Mr Barns.