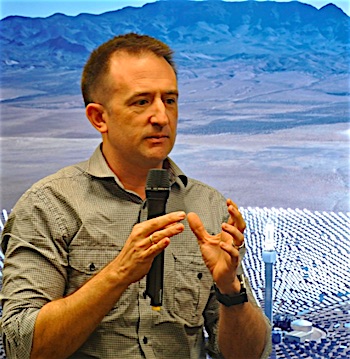 A leading engineering consultant “providing technical services and advice in power systems engineering and remote area project management to clients throughout Australia and the Asia Pacific” expressed intense irritation last night about a journalist raising questions of facts and figures for the “quickest, most efficient and cost effective pathway towards a renewable energy future”.

Facts and figures? Gosh, what next?

The consultant, one of the panel at a public meeting on solar power last night, who didn’t appreciate being “put on the spot” was Lyndon Frearson, managing director of CAT Projects, a branch of the long established Centre of Appropriate Technology in Alice Springs, funded at partly from the public purse.

The meeting was called by RePower Alice Springs which it says is “facilitating broader community discussion on pathways to achieving a solar energy transition for the town”.

The main issue was the hotly debated $75m power station the NT Government which is “locking Alice residents into a previous era of dirty fossil fuel energy supplies,” as Jimmy Cocking has put it. He is the director of the Arid Lands Environment Centre (ALEC) and a leading light in RePower Alice Springs.

The journalist was me.

The Alice Springs News Online broke the story of the new power station on February 2. We have since devoted thousands of words to the issue, reports researched by us, and excellent contributions in our comment section from readers. Google all this on our site.

RePower Alice Springs has urged the government that instead of 10 gas powered engines it should buy only six and spend the rest on solar. Passions ran high but the problem that soon emerged was a lack of – well – facts and figures. This is where Mr Frearson was meant to come in. But he didn’t.

The News was seeking to balance government claims (sample: electricity costs will go up 400% if we go 100% solar – Adam Giles) with comprehensive cost figures and a detailed implementation plan for a gradual transition to a renewable generation system as proposed by the solar lobby in town.

Clearly it has to be a tailored solution: On the one hand we have lots of sunlight. On the other we are not on the national grid. And so on. There is no room for warm feeling in the tummy stuff which, regrettably, is being dished up in large measure, including last night. Hard questions were clearly off the agenda.

Mr Cocking, with whom I had had several conversations about the $75m power station, emailed me on April 22: “These technical engineering questions would be best answered by someone like Lyndon Frearson.”

On April 26 I sent an email with detailed questions to Mr Frearson. I received no reply from him to that email, nor to follow-up emails on June 1 and July 19.

To an email on June 7 Mr Frearson replied: “Thanks Erwin. Am in NZ at Pacific Energy Conference. Will speak soon.” We didn’t – not until last night.

Since April 26 I have made repeated requests to Bruce Walker who heads up the CAT Group. No joy either.

Mr Frearson’s angry response to me last night raises some troubling questions. He talked about building a team around him, delivering knowledge to people in Australia and 13 other countries, building trust – all honourable objectives, to be sure.

But what did he mean by saying his duty is also to “keep the lights on in our office … keep people employed”?

CAT gets NT government money – public money – through grants and contracts, as I understand it. Is this an issue here of not biting that hand that feeds CAT? Would it have been a bad look to challenge the spending of $75m of taxpayers’ money in this way?  Are the people who pay for CAT through their taxes getting value for their money from CAT Projects? Does the partly publicly funded CAT have a responsibility to the public or to the government?

What we do know is that the election is now just 11 days away after a campaign in which the government has bent over backwards to cling to political power. In the absence of a credible alternative, RePower Alice Springs, which would have benefitted greatly from the solid information the News was seeking from Mr Frearson, failed to influence the course of history. 10 gas engines it is.

And the News had to get information about a city turning solar not from an Alice Springs local, but from the Curtin University in Perth.