Gutsy questions on gas and economy

Grog, fracking and the economy dominated the Q&A part of Tuesday’s pre-election forum staged by the Chamber of Commerce when eight candidates came under polite but robust questioning from the crowd of about 100.

Probably the most memorable statement came from Chief Minister Adam Giles (CLP, Braitling) during the wrap-up of the function in which the incumbent had been battling two independent, one Labor and one Green contestants.

Mr Giles said he had been accused of pork-barrelling Alice Springs. He admitted that was absolutely true, listing the multitude of facilities and services his government had created.

The first part of the forum was somewhat short of being inspiring, with the panel members each responding to pre-arranged policy questions and mostly speaking or reading from notes.

The only applause and laughter came in an aside to an observation by Adam Findlay (Labor, Araluen) about the absence of electric car recharging stations, from moderator Damien Ryan (Mayor) who quipped that the town council carpark will soon have one.

The friendly tone he encouraged was aided by a device installed by Chamber CEO Kay Eade: A wall-projected clock opposite the panel counting down the 90 seconds speakers were given, with a hard-to-miss bell marking 15 seconds to go.

There were ripples of increased interest during this opening part when Dale Wakefield (Labor, Braitling) suggested Alice Springs should be ashamed that Port Augusta and Broken Hill are ahead in solar developments, and when she spoke about her party’s promised $10,000 first homeowner’s grants.

Phil Walcott (Independent, Braitling) made people sit up when he commented on mandatory alcohol rehabilitation: “$68m in the year before last to work with 420-odd people, somewhere between $60,000 and $80,000 per person and a revolving door.”

He was speaking as someone who has been on the rehabilitation selection panel for three years. The measure would be scrapped under a Labor government. 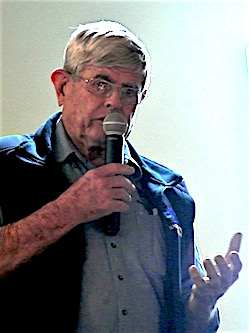 The forum got into top gear when Councillor and caravan park owner Brendan Heenan (at left) raised electricity costs in South Australia, and royalties that would flow to the NT government form a bigger gas production.

Ms Wakefield answered while Labor would bring in a moratorium on fracking, “it’s a furphy” to suggest it would seek an immediate change-over to solar.

All the same, fracking is a concern, “not just on the Eastside,” she said.

Mr Giles said the new Owen Springs power station would generate 15% less emissions and allow a 15% to 20% drop in power charges. Fracking had been used in the Mereenie basin since 1967.

The NT Government’s regulations are “the toughest in the world,” he claimed.

Ever keen on numbers, Mr Giles said if all Australian coal fired power stations were to be replaced with ones running on NT gas, greenhouse emissions would be halved.

Tanya Hall, of the Frack Free Alliance, suggested the current gas glut and the falling prices should be taken into account.

Mr Giles replied that the recent Deloitte report said gas could generate $1b in royalties, some of which is proposed to be channelled into study grants. He said there is no doubt that new energy sources would be developed in 2040 or 2050.

However Steve Brown (CLP, Araluen) said gas is a free enterprise business and cost-benefit studies are a thing for “the people who put in the money”.

Countered Mr Giles: Labor would stop production immediately, and the light will go out in Alice Springs: There will be no generation.”

Mr Giles did not comment when the suggestion was raised that all fracking wells should be overseen by independent inspectors.

Ms Wakefield said there may well be a discussion about jobs, but if the water supply is compromised there would be no economy at all. 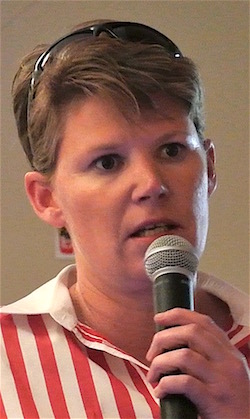 Dale McIver (at right) said Alice Springs needs a cheap airline. The “high end” of the tourism industry is “not big” and the town relies on the drive and backpackers market.

Mr Giles said a low cost carrier would be announced “very soon”, from Melbourne or maybe Brisbane, but there would be no government subsidy because such a scheme “usually falls over”.

Ms Wakefield said Labor would make “no 180 degree turns on tourism policies, it is committed to the 2020 plan, and would look to expand the Indian and Chinese markets, “especially India”.

To a question from a tourism operator, saying that “the Rock is running at a high 90%” and asking if Labor would scrap Tourism NT, Ms Wakefield said: “I can’t see it.”

How could credibility in politics be restored, asked Graeme “Tjilpi” Buckley (below, left).

For the 25 Members in Parliament to work together for the community, was Mr Walcott’s answer, not “wasting breath on argy barjy,” getting the great messages out, with lots of independents at work. 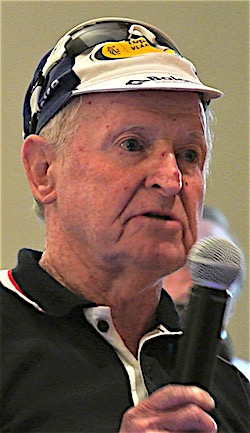 Questions from Peter McDonald about the Banned Drinkers Register (BDR) and “cops at bottles” were dealt with in detail at the PAAC sponsored forum yesterday.

A comment from DASA CEO Carole Taylor that a bag of chips at a fast food outlet is cheaper than good food prompted Mr Walcott to suggest community gardens – once a thriving industry in The Centre – should be brought back.

Mr Brown said Alice Springs once had a farm area growing enough to export to Darwin.

Mr Melky said fruit and veg grown in TiTree – 200km north of Alice – is transported to southern capitals where they are turned ‘round to be sent to Alice supermarkets.