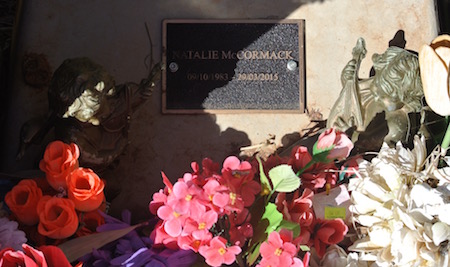 Important evidence against the key suspect in the death of N. McCormack seems to have been compromised by the failure of police attending the crime scene to record conversations with the suspect in their notebooks.

There is no record “right through” of the conversations with Nathan Swan, the husband of Ms McCormack who was alone in the house with her when she died from a single stab wound. He spoke with police at the scene but later refused to participate in a formal interview. He has since left the NT for WA.

Over the last two days the police attending the crime scene have been questioned at the inquest into Ms McCormack’s death.

Apart from the opening statement by counsel assisting the Coroner, Kelvin Currie, in which he spoke in some detail about the long experience of domestic violence and ultimate death of W. Murphy, the inquest to date has focussed entirely on the case of Ms McCormack. Ms Murphy’s husband Stanley Scrutton was sentenced in June to ‘life’ for her murder. He will serve a  minimum 20 years.

Mr Currie told the court today that there are “effectively three interpretations” of the one conversation with Nathan Swan, a conversation that is likely to be “very important”, as  Coroner Greg Cavanagh commented, in any new investigation or eventual prosecution.

These “interpretations” come from the statements made by officers, relying on their memories, after returning to the station from the scene.

Crucially one officer reported in his statement (but took no contemporaneous notes) that Nathan Swan said he and his wife had argued and later he saw her on the bed and there was blood there. The crime scene examiner found there was no blood on the bed, but a large amount was concentrated on the floor around the doorway to the bedroom, which was where paramedics found Ms McCormack.

The court also heard today from the Major Crime Squad officer who had attempted to conduct a formal interview with Mr Swan. It lasted for perhaps 10 minutes when Mr Swan made clear he did not want to participate. It was then brought to a close, with no questions having been put to him. This would have been different had Mr Swan been exercising his right to silence, the officer said. In that case, all of the prepared questions would have been put to him.

Where did he learn that that was the appropriate procedure, Mr Currie wanted to know. The officer couldn’t really answer, but it was always done like that in his experience.

Today’s hearing began with comments from Mr Cavanagh on just how proactive police are in acting on domestic violence in the NT. The inquest has heard of specific examples and in Mr Currie’s opening he statement he reported that dealing with domestic violence takes a third of police time, with NT police attending over 10,000 incidents every year where Indigenous women are the victims.

Mr Cavanagh also noted that the inquest will be looking beyond a ‘law and order’ response to the issues, which clearly has its limitations.

Inquest probes reasons for ‘out of control’ domestic violence

Police, courts, gaol could not save women from violent husbands