Inquest probes reasons for ‘out of control’ domestic violence 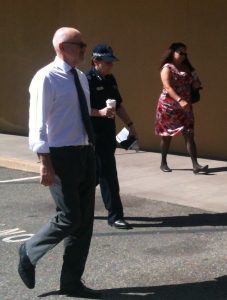 It looks as if your brother killed Kwementyaye McCormack, the distressed sister of Nathan Swan was told in the Coroner’s Court today. This came after her own moving testimony of torn loyalties: she is close to her brother “like with any brother”, and was very close to her late sister-in-law: “She was more like my sister to me”.

Now Justine Swan-Castine and her husband of 17 years are caring for the couple’s two children as well as their own four. She was aware of domestic violence in the relationship between Ms McCormack and her brother. She encouraged Ms McCormack to leave, assuring her that she would ‘“always be there for her”. Her brother would not talk about the violence: “That’s the way it is in our family, we don’t talk about it, it’s hidden behind closed doors.”

She was asked if she knew his whereabouts. She told the court he is in WA, that she understands his lawyer has told him not to come back and not to make statements to police. She said her brother wants to tell his side of the story, so he can move on but his lawyer insists that anything he says must go through her.

After Ms McCormack died from a single stab wound, Mr Swan was charged only with breaches of the DVO against him (police weren’t able to produce enough evidence to proceed further). He was sentenced to 14 days, to be served cumulatively with a six week sentence for possession of a trafficable quantity of cannabis.

Ms Swan-Castine visited him in prison a couple of times. She was questioned about what her brother had said regarding Ms McCormack’s death. She said he told her that Ms McCormack stabbed herself; she didn’t want to go into detail with him, it was “too traumatic, it was bad enough losing her”.

Coroner Greg Cavanagh told her that one of the reasons the inquest is being held is to look more deeply into the reasons why domestic violence is out of control in Alice Springs. Would she agree that was so? She agreed, mentioning alcohol abuse as one reason why.

She was asked by counsel representing the Commissioner of Police, Jodi Truman, what she could suggest the Coroner should think about in relation to domestic violence issues. Ms Swan-Castine said one of the biggest things, though not in this particular case, was the pressure on victims from family members to not leave their abusive partner.

She also had some advice for the courts: when domestic violence cases come before them, do not keep adjourning the hearing. “It needs to be dealt with as soon as possible.”

It seems certain that the Coroner will recommend that the case against Nathan Swan be re-investigated. Counsel assisting, Kelvin Currie, summarised the evidence against him, saying that the standard of proof for the Coroner is “on the balance of probabilities”, not the higher “beyond reasonable doubt” that applies in a criminal trial.

The evidence includes contradictory statements from Mr Swan (to ambulance and police arriving at the scene) about where he found Ms McCormack (on the floor, on the bed); his freshly fractured hand which the forensic pathologist described as a “boxer’s fracture” usually occurring as a result of a direct impact of the fist against an object; the bruises on the back of Ms McCormack’s hands, consistent with her holding them up to protect her face. 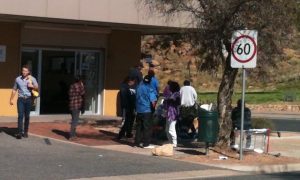 The court also heard today from Gary Swan, cousin to Nathan. They had been together outside the casino on the night of Ms McCormack’s death. He was asked how Mr Swan seemed when he was dropped back to his home with Ms McCormack. Normal, happy, joking, laughing is what he had told police at the time and what he agreed with now.

The questions then were around “relationships” in his family, and the attitudes of men in the family towards domestic violence. These questions were very ‘broad brush’. Mr Cavanagh asked for example, “The men in your family, do they belt their missusses from time to time?”

“What are you saying? What do you mean?” asked Gary Swan.

Mr Cavanagh narrowed the field: “Did you and Nathan belt your missusses from time to time?”

Gary Swan didn’t know, he had never seen Nathan hit his wife. He was asked whether he and others in his family need some organisation to talk to them about the proper way to treat their partners. “I don’t know,” he said. “Would it help?” he was asked.  Again, he said it didn’t know.

COMMENT: These questions seemed to me very loaded, with the men of a whole family being targeted.

Gary Swan was in the witness stand with no legal representative or support person of any kind, faced with persistent questioning from three highly-trained legal professionals.

He was asked by Mr Cavanagh, for instance,  if he’d seen his father belting his mother, seen his uncles bashing their wives. When he answered “no”, Mr Cavanagh said, “Wow! I don’t believe you. Why won’t you tell me the truth? It’s hard to believe that you’ve never seen your uncles belt their wives.”

Mr Swan did eventually concede that when he was a little kid he had seen “older cousins laying into women”. Did it upset you, did you get used to it, he was asked. “What do you mean?” he again answered.

It became apparent that he is currently in custody for domestic violence against his ex-wife. He was quizzed, and I would say even hectored about the circumstances, yet he has already been tried for this matter and is doing time. The whole experience of being badgered into speaking in the broadest of terms against the men of his family – the whole lot of them – seemed to me a very strange process in terms of fairness to him and his family, and usefulness to the inquest.

RELATED READING:  Police, courts, gaol could not save women from violent husbands