Police, courts, gaol could not save women from violent husbands 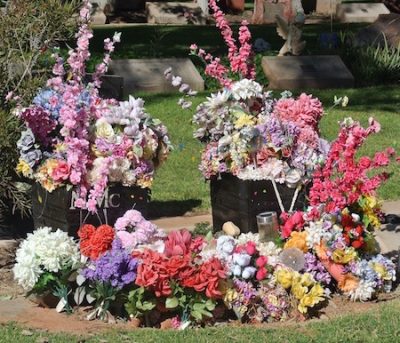 The violent deaths in their homes of two women after long years of brutality towards them by their husbands has prompted the NT Coroner to hold a double inquest looking into the issues of “extreme domestic violence” and a criminal justice system helpless to protect these victims.

Right: The grave in the Alice Springs garden cemetery of one of the women, N. McCormack. Photographed with permission of her family, who attended the inquest in good number today.

In June this year Stanley Scrutton was sentenced to ‘life’ for the murder of his wife, W. Murphy. In a “vicious and prolonged beating” on 20 December 2014 he inflicted over 40 blows on her, including kicks and stomping to the head and chest. This followed more than a decade of violent attacks – 45 in total that police are aware of. In almost half of these Ms Murphy suffered injuries to the head.

Despite her unwillingness most of the time to cooperate with police, they did intervene. Mr Scrutton had spent almost six and a half years out of the preceding 10 in prison before he earned his life sentence. It will see him serve at least 20 years.

In the early hours of 29 March 2015 N. McCormack died from a single knife wound to the thigh. She was alone in the house with her husband, Nathan Swan. He called the ambulance, telling them that his wife had “fallen on something sharp and she’s bleeding and she’s drunk”. When police arrived he told them she had done it to herself, but in his formal interview Mr Swan answered police questions with “no comment”.

Police records show 32 episodes of domestic disturbance between Ms McCormack and Mr Swan, dating back to 2003. There were DVOs in place on and off from 2008 till the time of her death. They were often reciprocal ‘no contact if intoxicated’ orders.

Nobody has been charged with Ms McCormack’s death. “The Police investigation to date has not disclosed sufficient evidence to sustain a charge relating to her death,” Coroner Greg Cavanagh was told today. But there is also “no evidence whatsoever to corroborate the hypothesis that she stabbed herself.”

“Clearly both of the deceased did not believe the criminal justice system met their needs or circumstances,” said Kelvin Currie, counsel assisting. “As indicated by Kwementyaye Murphy, her need was for Mr Scrutton to stop hitting her. The criminal justice system could not stop him. He was in custody for more time than he was at liberty and yet the pattern of his violence when at liberty seemed unaffected. Indeed it increased. From the perspective of Kwementyaye Murphy he was a good man when he was sober, but a violent man under the influence.”

At the time of their deaths both women were intoxicated as were their husbands. All four had long histories of “indulging heavily” in alcohol. The Coroner was told today that the harm done to victims in Alice Springs is “considerably worse” than elsewhere in the NT, with Alice also recording the highest levels of intoxication for both victim and offender: “In those incidents where the victim suffers significant levels of harm, the offender is intoxicated 90% of the time.”

After Mr Currie’s opening statement the rest of the hearing today was spent eliciting detail around the circumstances of Ms McCormack’s death and the unlikelihood of it being self-inflicted. The court heard of a happy woman, who loved her children (two sons with Mr Swan), her family and friends. She was employed at the Tangentyere Safe House as a youth carer.

The day she died she’d had a “girls’ party” at home before going out to the casino with some of her guests. The court saw CCTV footage of her there. It looked like she was having a good time and that’s what the witnesses thought also. Nobody could recall her ever speaking of wanting to self harm.

The forensic pathologist who conducted the autopsy, Dr John Rutherford, did not rule out the possibility of her either falling on the knife though it was “rather unlikely”, or stabbing herself – “not impossible but unusual”. Of some 7000 autopsies he has conducted a few have concerned self-inflicted stabbing. There’s a pattern: people underestimate the force required, he said, so it starts with a tentative stab, then one or more with greater force, until a sufficiently deep slashing or stabbing does the damage sought.