Tear-gassing of juveniles: probe versus gloss

The reports to the Giles Government on the the tear-gassing of six youths at the Don Dale juvenile detention centre – now notorious around the world after being shown on Four Corners on 25 July – could hardly have given more opposing accounts.

Compared to the very detailed investigation of the incident and the issues surrounding it by the NT Children’s Commissioner, which the Four Corners program closely followed, the account by Michael Vita, commissioned to review the whole youth detention system, is extraordinarily superficial and seems to have relied entirely on staff sources.

It was the tear-gassing – in Don Dale’s so-called Behavioural Management Unit on 21 August 2014 and a series of incidents leading up to it, starting with an escape from medium security by five youths on 2 August – that prompted the government to ask for the review. Mr Vita, seconded from the NSW juvenile justice system, provided his 65 page report to them in January 2015.

For the entire exercise he interviewed only one detainee, and that did not seem to be about this critical incident. The Children’s Commissioner by contrast interviewed all of the detainees involved.

In his account Mr Vita acknowledges the existence of CCTV footage of the incident and that it would be one way to “ascertain if the claims by staff are correct” but he does not seem to have seen it, as he refers to the footage as being “unlikely” to be available “given the storage time limitations of the camera system”. 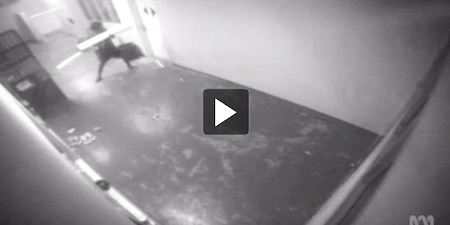 In his account he does not distinguish between the activities of any of the detainees remaining in their cells once the youth whom we now know was Jake Roper, highly agitated, has entered the open area (the so-called ‘exercise yard’): “The other BMU detainees, who were still locked in their rooms, continued to damage their rooms and attempted to break out themselves as well as arming themselves with various stabbing and cutting implements, gained from damaging their rooms.”

In contrast, the Children’s Commissioner (Colleen Gwynne, pursuing the initiative of her predecessor Howard Bath) avails herself of the footage and details what can seen in relation to each cell. The footage makes it quite clear that the two occupants of cell 4 had “no participation in the incident”.

Mr Vita’s account has it that while the incident was unfolding “other detainees in the main centre became excited after being incited”.

“The threat to management was that other detainees, not directly associated with the five in the BMU, could become involved, possibly get out of their rooms and partake in a much larger disturbance.”

There is no evidence of such a threat being considered by staff in Ms Gwynne’s much more detailed account, from either the interviews she conducted with the staff present or the Handicam footage recorded on the youth justice officers’ side of the door.

Mr Vita has “local staff and other more specialised staff from the adjoining correctional centre” arriving at the scene. The “specialised staff” are in fact prison officers. Ms Gwynne details that they were “subsequently equipped with riot shields, gas masks, helmets, arm pads, knee/shin pads, expandable batons and CS gas.” Only two of the three had training in the use of CS gas.

Mr Vita does report that then Corrections Commissioner was on site (as well as “the Director of YDCs and the Executive Director, Youth Justice”).

He writes: “As a result of consultation during the course of the incident and after exploring all the options available, the Commissioner, Mr Ken Middlebrook, made a decision to use CS gas to bring the situation to a halt after constant attempts to resolve the incident peacefully were met with defiance by the detainees.” 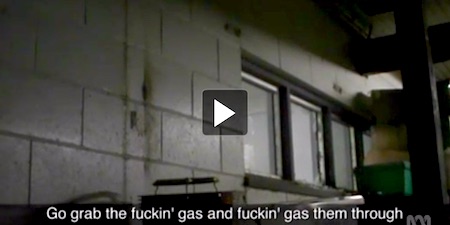 The Handicam footage (as transcribed by Ms Gwynne and shown on Four Corners) gives quite a different picture of the decision to use gas. It comes after a length of aluminium has been thrown by Roper through a high window (he had previously broken its glass). Landing on the other side it struck a youth justice officer (YJO) on the arm, making it bleed. This exchange followed between YJOs:

“[Roper], he threw this fucken steel thing out and fucken got me on the arm.  He tried to climb through the window and I poked him back through.”

“We’ve got to wait for approval first….”

“…It will make my job easier, if you show Ken he’ll just go yep approval bang, go, fucken get him out.”

Whoever was predicting Mr Middlebrook’s ready approval was right. The Handicam footage shows that shortly after he arrives he says: “Mate, I don’t mind how much chemical you use, we gotta get him out.”

Mr Vita’s suggestion of “constant attempts to resolve the incident peacefully” is wishful thinking in light of the CCTV and Handicam footage. There was no response to Roper’s requests to talk. Ms Gwynne transcribes the following exchange:

YJO :  He said he wanted to talk to you but I said you had your chance, so.

Earlier on Roper had asked to speak to Acting General Manager Jimmy Sizeland. Ms Gwynne reports that Sizeland “felt that his presence appeared to agitate [Roper] so he made the decision to keep out of sight of the young persons”.

Roper also had this exchange with a YJO, where he clearly articulates the reason why he’s angry (his prolonged isolation in the dungeon-like BMU):

[Roper]: I’ve been in the back cells for how long bruz?

YJO : Have you had time out or not?

[Roper]: Yeah but I’ve been fucken stuck in there for how long?

Ms Gwynne writes: “Yet despite the young person’s questions, the YJO staff continued to focus the negotiation on removing a shard of glass as opposed to engaging with him about his concerns” and “A review of the attempts to negotiate with the young persons by the YJOs revealed them to be of little value in terms of de-escalating [Roper’s] anger.”

“Just prior to the deployment of the CS gas [Roper] jumped up onto the window and told YJO D that he wanted to come out.

“YJO D agreed at interview that this was probably the case, however admitted he did not think to tell anyone that [Roper] wanted to come out because he was unsure of what was going on.

“YJO A told investigators he thinks the reason [Roper] wanted to speak to him was because he was scared of the dog.”

Shortly after, Mr Middlebrook gave the go ahead to use gas. Mr Vita says “two short sharp bursts of CS gas” were used. In Ms Gwynne’s account there are four bursts:

“PO [prison officer] D told investigators that they gained entry to the corridor and read out the required proclamation before the deployment of CS gas.  The proclamation was administered by a PO who had a mask on, therefore muffling his voice.

“PO C deployed two initial bursts of CS gas through the broken glass panel in the corridor door which he believed did not appear to take much effect because ‘[Roper] hit the door with the fire extinguisher.  He then deployed two longer bursts, which resulted in [Roper] complying with directions to lie on the floor.”

What happened next is summarised by Mr Vita as follows: “The area was made safe and staff, particularly local staff, then immediately decanted detainee [Roper] and the other four detainees held in the BMU rooms, decontaminated them and took them outside so as to receive relief from the effects of the gas.”

He gets the number of detainees involved in the incident consistently wrong. There were six, not five. And we know the unsanitised reality thanks to the footage aired by Four Corners. Ms Gwynne provides the following precision on the duration of exposure to the gas: Roper, three minutes; occupants of cell 2, five minutes; occupants of cell 4 – the card-players who were not involved at all in the disturbance – six minutes; and the occupant of cell 1, whom we know to be Dylan Voller (pictured here prior to the gassing), eight minutes.

Satisfied that no further injury to staff or detainees occurred, Mr Vita concludes: “It is important that those who seek to criticise these actions take into consideration the volatile nature of the incident, the poor infrastructure which did not enable any other options to be explored, the refusal of detainee [Roper] to mediate and the fact that the five detainees housed in the BMU included some of the same five that had successfully escaped the facility approximately three weeks earlier by scaling a perimeter fence and how, if this incident was not finalised quickly that this could once again be a threat to the community.

“The additional factor in any disturbance is the unknown potential for fire and the smoke that is emitted. This was considered under thought that if somehow the detainees lit a fire the end results could have been tragic. The safest option to bring the disturbance to a halt and provide safety to all involved, including the community, was assessed to be to use two sharp bursts of gas.

“The review considers that the actions of the Northern Territory Commissioner in this aspect were justifiable.”

This stands in sharp contrast to the conclusion of the Children’s Commissioner: “The use of CS gas on juveniles held in detention under the provisions of the Youth Justice Act is violent and involves the dosing of a chemical substance, therefore it is not reasonably necessary as prescribed by s 153 (3) of the Youth Justice Act.

“The investigation has determined that the force used was unnecessary and in contravention of s 153 (2) of the Youth Justice Act … the young persons suffered harm as a result of being exposed to CS gas and a mandatory report as prescribed by s 26 of the Care and Protection of Children Act was required.”

Mr Vita’s conclusion also deflects blame away from the decision-makers and their staff, blaming instead the poor infrastructure and Roper, whose behaviour was undoubtedly threatening but whose attempts to talk to staff were repeatedly ignored. The concern about fire and smoke seems to be mere speculation.

In the context of much of the rest of Mr Vita’s report the account of the tear-gassing reads oddly, when the incident could be seen as an object lesson for the multitudinous deficiencies of the system he identifies: its staffing (90% casual or temporary), training (then only four days for a YJO), manuals and procedures (outdated, inadequate or lacking), very poor detainee facilities, workplace conditions, and above all, a lack of programming to help young offenders achieve rehabilitation and a lack of a philosophy to drive this, what should be the primary purpose of youth detention.