Harts Range may give Birdsville a run for its money 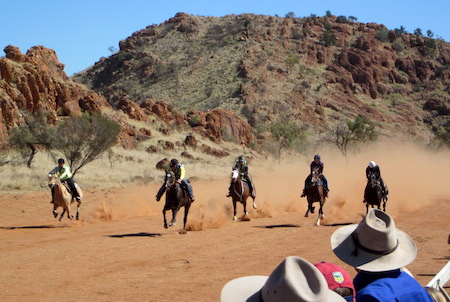 Birdsville Races, move over, here come the Harts Range Races.
This year’s fixture on the weekend attracted a record crowd of about 3000 people, up 20% on last year, and unlike the better known Queensland event, offers a much greater range of entertainment.

Racing wasn’t limited to the four horse events, each with six horses brought in from as far as the Gulf Country: Lizards were racing as well, so were kids hopping to the finish line with their legs stuck in sacks, and the gymkhana was popular again.

The camp draft attracted more than 100 competitors, half of them juniors.

Rodeo riders came from as far as Darwin and Mt Isa. 25 entered the biggest event, the station buck jump, where riders must stay in the saddle for eight seconds while cracking a whip at the same time.

Ms Bird says 650 wrist bands were handed out to people going to the legendary Ball – tie obligatory for gentlemen – although guests had to take it in turns because 450 is the capacity of the venue, a tin shed and a yard.

Ms Bird says Daran Rumbal, from Rock City Music, “came out of retirement” to provide the entertainment. (He said this morning he’ll be there again next year.)

To sleep the huge crowd fans out into the surrounding bush and rolls out the swag, around dozens of campfires.

In 2017 the 70th Harts Range Races will take place and with both major parties contesting this month’s elections pledging a boost for major events tourism, the legendary bush fixture is likely to be top priority.

Ms Bird says road access is improving, with the seal of the Plenty Highway advancing towards Harts Range. 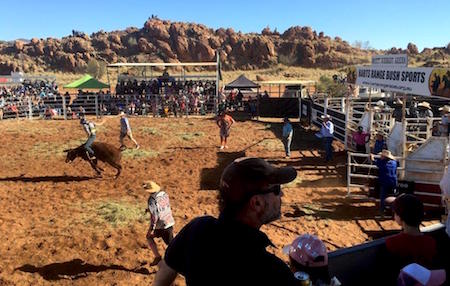 There is discussion about moving the airstrip, now about five kilometres from the racecourse, to north of the highway, making it suitable for larger aircraft and possibly for night operations.

The market is certainly there: Birdsville races, on the first Saturday in September, sees more aircraft movements than Sydney and Melbourne put together.

PHOTOS from top: Kids in a three-legged race • Horses racing in the final straight • Race caller Sean Parnell in his tower • Action in the rodeo arena.  Photos courtesy SEAN PARNELL and CHANSEY PAECH.