The world's marvels at his feet

The Frenchman I interviewed in the council library on Monday, 32-year-old Killian Blais (at right), is medium height, medium build, has a pleasant face, good European manners, is fluent in English and tells his story in a laid-back, friendly way – your average sort of guy.

What makes him different is not that he comes from Paris – the French love The Centre – but that he came on foot, walking 18,000 kilometers.

It took him eight years.

And here’s the next surprise: His tale isn’t one of near misses and hair raising adventures.

What he found was that people around the globe are a pretty decent mob, especially in the rural areas where still almost half of humanity lives.

Killian met thousands: “People are smiling, safe and welcoming. It changed my view of the world,” he says. “TV shows its worst side, and usually from the big cities.”

He used transport only to renew visas. In such cases he left the country, obtained a new visa and returned to the last point he had walked to: “The game was to draw a continuous line on the map where we walked every single kilometer,” he says.

His other principle was not to work for money.

He had dozens of jobs but only to repay his hosts for their kindness, food and lodgings. Each time it was a social contract, not a money transaction, he says.

Other than that he’d been able to save enough cash for the trip with two years’ work in France whilst staying in his parents’ home.

Not being in a hurry and having no time table is clearly a marvellous opportunity: He would stay for weeks in some places, getting to know people, enjoying nature or spending time with a girlfriend.

He would sleep mostly in his tent, or in churches or mosques or wherever, carrying all he needs in his backpack.

Killian started his remarkable journey in a group of eight. After four months the group had shrunk to two. For the next six years he walked with his friend, Thierry Montaner. He is 38 and about two years ago he decided to head back home. From then on Killlian travelled on his own.

He walked between 25 kilometers a day on roads and tracks and just four kilometers in jungles.

It took him 18 months to traverse China.

In Australia, after getting tired of the bad Melbourne weather, he’s just walked up-stream the Finke River, from where the Stuart Highway crosses it, all the way to Glen Helen.

It was a big change: No people. Just wilderness that’s “out of the ordinary,” as he describes it. He even chose to carry a personal locator beacon, for safety.

He carried food for 15 days and got water from waterholes along the way, after the good rains, even along the tops of ridges where he preferred to walk.

The biggest problem in the past eight years? Killian doesn’t make a big deal of it, but it was bureaucracy: Keeping abreast of visa requirements in China, for example, is a bit of a mission.

It’s a small price to pay for taking in the marvels of this world, the slow way.

So next time you get hassled by the cost and tedium of flying … ah, what a nice thought!

PHOTOS (from top): On the Tibetan high plateau • Kazachstan, near the Chinese border • In a Vietnamese village • The Karakoram peaks on the horizon • Home for the night in Thailand • A snake taking the high road while the ground is too cold. 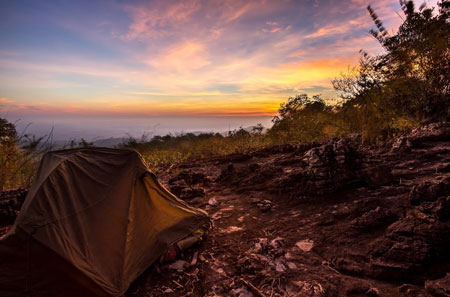