Coming eye to eye with the meaning of home and country

Walking into Jennifer Taylor’s Eye to Eye exhibition in the large Gallery 3 at Araluen, immediately on your left is a landscape in mountain country. In its centre is a pool, beckoning. You can almost feel yourself tipping into it. It is like an eye in the world: you look, it looks back. For the moment, all you see is its reflection of the sky above but you sense that there may be more, an invitation to its mystery. By what steps will you be able to enter into it? 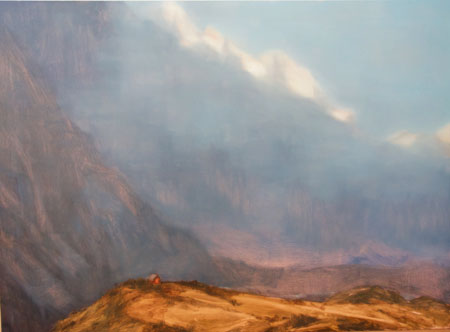 Taylor – primarily, but also curator Stephen Williamson, for the hang of this exhibition acts like a guide – steers you gently forward. You are in rugged country. It’s not this place – her favoured Eastern Arrernte country in central Australia – but there are echoes. It feels disorienting.

If you know your place names or you know something of the personal and artistic history of this painter, you may realise that in this passage of the exhibition you are in the South Island of Aotearoa / New Zealand (Taylor was born and raised in the North Island). Roads make their appearance: a sense of imminent human presence or a presence that has passed.

And by now you may be registering the soft intonations of a woman’s voice. You are not seeing human figures in the images and only rarely their physical trace but this body of work is about, in part, the ways humans bring country into being – with the ways they look upon it, name it, work it, remember it, mourn it … paint it.

You come down from the mountains to the sea. These sandy shores and expanses of water under lowering skies are in a place called Haast. Again, a double take. That’s also a European place name here in The Centre, and indeed it honours the same historic figure, a Prussian-born geologist who worked in NZ in the 19th century. It prompts a thought about the many levels of relationship between our countries, not only laid down by British settlement and its repercussions for the countries’ existing peoples, but geographic – neighbours in the southern hemisphere – and in deep time, geologic.

Another thought: in this Haast group there are two works, one larger, one smaller, that are essentially of the same view. The point of view is identical, the sun, veiled by cloud, hangs in the same place in the sky, yet they are different in tone and mood. They draw your attention to the act of painting the landscape: no matter how representational a work may be, it is also constructing its subject.

You might turn now and there the unmistakeable bright rock of the Centre rises up in rugged peaks, and a wall text transcribes what you can hear being softly spoken. 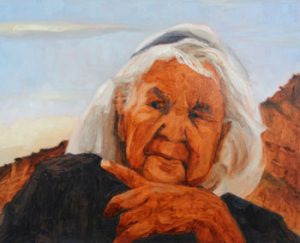 And you are teleported from distant reveries to this place, in Eastern Arrernte country, and its relatively recent history. The voice belongs to Agnes Abbott (portrait, 41 x 50 cm, at right) and she is talking about the work she and her husband used to do when they first married, fencing on a cattle station in their country in return for rations. There are two small paintings of cattle in pasture here – they are like cut out figures, flat against a field of blond grass, no horizon, no perspective, no attention to detail, emblematic of an industry, a way of working the land, changing it, changing its humans.

You turn the corner and are catapulted back to Aotearoa. Alpine country, towering peaks, cloud hanging into the valley, veiling the sunlight on the snow-topped crests. In the foreground a tiny hut, Barker Hut which gives its name to this painting (at top). Perched on a shoulder of mountain below the peaks, it inserts humans into this mighty landscape, if only in passing. In its placement in the composition of the painting, it constructs your view, it makes you feel insignificant, awestruck.

There is a pleasure you take in this feeling, of being overwhelmed by a sense of nature’s power – it’s called ‘the sublime’, a concept and aesthetic with a strong cultural lineage in Britain and Europe. This is a very distinct way of experiencing the human in a landscape, and – now I’m jumping forward through the small encampments of beautiful paintings of night skies, of green- and yellow-tinged skies, of more snowy peaks – it stands in strong contrast to another major work in the show.

Picnic at Alangarlkele (above, 2016, 60 x 369 cm): you are back in Eastern Arrernte country. The composition unusually masses form to the middle and towards the frontal plane of the painting. You feel like you are right there, your feet in the water, and this mass of rock is rising up, enveloping you, looking down upon you (rather than you feeling that you are looking up at it, as in Barker Hut).

There are wall texts here, one from Agnes Abbott, recalling her “real wild” youth before being brought in to the mission at Arltunga, and her fond memory of her maternal grandfather, old Fred Atyelpe; the other from Taylor, who evokes the picnic she and Mrs Abbott shared at this place, the sense that Mrs Abbott had of “that old man standing there, smiling down at me”. Taylor reflects on the intimacy of connection that Mrs Abbott and other of her Arrernte friends experience with their country and with the people who have lived there, even if now they are largely absent; how altered her own experiences and perceptions are as a result.

How to convey this in paint must have been her question. That frontal massing of the landform she had used strikingly before, in her Dusky Bay panorama, the major work of her 2014 exhibition at RAFT Artspace. Although in mood the two works are very different, the compositional device works similarly, disrupting the typical framing of landscape which acts to draw you in, asserting a presence that forces you to think. 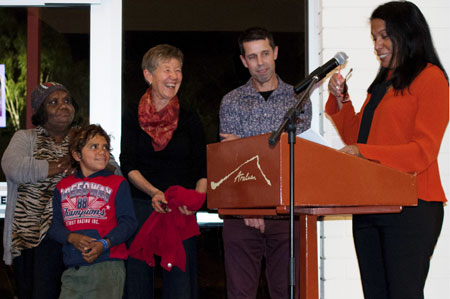 There are so many things to think about in this fine exhibition, beautifully summed up by Josie Douglas in her opening speech as being about the “meaning of home”.

At left: Josie Douglas at the microphone, and from left, Amelia Turner and young relative, Jennifer Taylor, and Stephen Williamson. Photo by Erica Tarquinio.

“Home means everything, home means family, home is your place in the world. The question Jenny’s work examines is what happens when you have to work at being at home.”

The quest for answers has taken her into a deeper relationship with Arrernte people, inherently at home in this country she paints but also challenged in their ‘at homeness’ by the aftermath of settlement. Agnes Abbott has been her principle guide in the work for Eye to Eye, and there is a quite different way to experience the exhibition, turning to the right as you enter with her portrait as a starting point. And she is literally pointing, to the adjacent painting (bottom, Arltunga road after fire, 2015, 43 x 307 cm) that shows the landscape through which she travelled, hardy child of the bush with the indispensable knowledge of the soakages, when she ran away from the Arltunga mission.

“Travel this way with me,” she seems to be saying, which is what Taylor has done, in an extended collaboration with Mrs Abbott and her relations.

Or, if you come to her image as an end point of the show, the message might be, “This is my country in which I live my life and make its meaning.”

How do we, who live here now alongside traditional owners, respect them and their country and how do we too make of it home, in the deepest sense, reconciled to its history, our history with all their losses and gains. One way is through relationship: “Our hearts have to get bigger,” as Josie Douglas said on opening night. Doing the mental and emotional work. Following in Taylor’s and Mrs Abbott’s path.