An extraordinary career in education is coming to an end this week as Chris Tudor AM retires after 30 years as headmaster of St Philip’s College.

In that time he presided over the expansion of a small boarding facility for bush kids going to school in Alice Springs, into a full boarding and day school as secondary students in the town began to migrate to private schools in large numbers.

More than 500 students, ex-students, parents and friends honoured Mr Tudor on June 18, undeterred by the aftermath of the hailstorm the day before, necessitating a major clean-up before the function could take place in the college’s sports stadium.

Mr Tudor presided over the growth of the college from 147 students in 1989, when it began to operate as a school, to 720 today, and 21 construction projects boosting the real estate value of the campus to “tens of millions of dollars,” according to St Philip’s. It is a dream coming true that had its roots in Mr Tudor’s childhood in another outback town, Broken Hill.  He spoke with editor ERWIN CHLANDA.

NEWS: Why do you think Alice Springs needs private schools?

TUDOR: They provide competition, and that’s a healthy thing in education. It’s a norm around Australia and has evolved over time. Particularly in Alice Springs, where there is a limited number of schools, competition is a good thing, for everybody. In my time that competition has been reasonably friendly. I always got on  well with the principals of the other schools. I was vice-president of the principals’ association for a while.

NEWS: Speaking as a father of four, two boys and two girls, what are the respective challenges for a teacher to teach boys and girls?

TUDOR: We have a society based on two genders working together. I see education, at least in part, as having a social role, developing social skills. It’s important to recognise that there is a difference in need. Whilst not wishing to be type-casting, boys are often very energetic, there is a real high energy factor there. If I started the school again I would have everybody doing physical activities for the first half hour. Girls would benefit from that as well. They are enhanced by the high energy of the boys. While boys like talking to each other, being part of a group is probably more important for the girls.

NEWS: Which group is the easier one to teach?

TUDOR: It just depends on the chemistry of the class. I remember when I was teaching in the Wangaratta school in the mid seventies. I was assigned to 4C and it was a class of all girls although it was a co-ed school. I thought this would be straight forward. It was one of the hardest classes I ever taught. I’m a big believer in the word telationship – that’s teacher and relationship). You can’t have good teaching without a good relationship between the teacher and the student. You’ve got to generate that relationship with the girls and the boys. Boys will often resonate with you if you talk about their interests. Girls will be looking more for a general conversation. 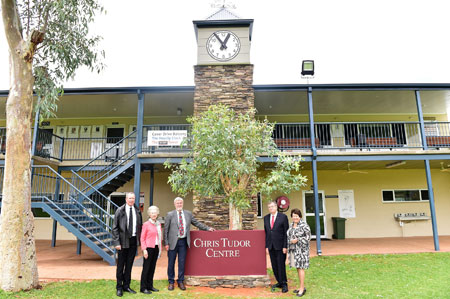 NEWS: St Philip’s is a member of Round Square, a worldwide network of innovative schools in 40 countries across five continents. Is it for privileged kids, and does that set them apart from other young people, here and overseas? Is it for rich white kids?

TUDOR: No, it’s not. There is a broad selection of schools, ranging from fairly wealthy Caucasian schools to schools in Africa which are really poor and completely indigenous. We sent an exchange student to a school where he was the only white kid, which was a great experience for him. The cost of belonging to the organisation is not too much, but we need to be aware that there are schools which wish to belong but cannot afford the fees. The Round Square organisation assists them, or other schools sponsor them. We have sponsored a student to come over here from one of the African schools.

NEWS: Where does St Philip’s sit in Australia’s grand scheme of private schools, so far as fees are concerned?

TUDOR: If you express it in quartiles we would be in the lowest. Our fees are about $7500 and the fees for the most expensive city schools would be not far off $30,000.

NEWS: Please compare the academic achievements of St Philip’s with those at other schools in town.

TUDOR: We’re at the top end, and over the years our capacity to perform has improved dramatically. We held on to a range of very good staff, particularly senior staff who have developed a belief in success. Kids believe they can be successful. I can’t explain how that works but I believe that is a factor in kids succeeding. Eddie Tikoft becoming number one in the Territory in 2008 had a profound effect on the other kids.

NEWS: Your school’s outdoor education program is legendary. Where is it placed in terms of importance?

TUDOR: High. I was engaged as a teacher of that before I came here and if I hadn’t come to St Philip’s I would have done further studies in that area. Some kids are worried about going, are scared, and then have that great feeling of accomplishment at the end of it. One of the key things in education is social development and that actually takes place in those bush camps.

NEWS: Alice Springs has a big spread from rich to poor. What kind of commitment does St Philip’s have to the disadvantaged in our community?

TUDOR: We accept students on bursaries. If a student can’t pay we will consider their situation. We offer a number of bursaries a year. We also have the Tanya Smith Fund which pays for Indigenous kids. That attracts donors from around Australia as well. Our Indigenous population is about 90, out of 720 students, and that has steadily grown over time. We are certainly thinking of more ways we can assist.

NEWS: What are the three things you are going to miss most?

TUDOR: Number one, the students. I am a chalky. I like working with kids. I’ve been doing it since I was 16. To wake up in the morning and probably school my dogs will be, well, interesting. Secondly, I’ll miss the staff, all 160 of them. It was terrific putting together a good staff. It’s like a puzzle. I’m a big believer that every staff member is important. And the third thing is, the job is wonderfully creative, coming up with ideas, trying to make it work, finding the money, having to push yourself.

NEWS: What specifically has this creativity achieved for St.Philip’s?

TUDOR: Generating a selection of subjects which will appeal to a whole range of kids, not only the kids who’re heading off to become doctors, or the straight-forward academic line. We realised that kids need to belong to the campus. They need to clearly identify the place as theirs, get a kick out of being at their school. It’s a mood that promotes ownership. And also, you’ve got to have the courage to do the impossible. Give it a go and use your imagination. Nearly 10 years ago, we got a donation of $50,000 and we built a chapel with that ourselves. It was a massive risk that it would be a white elephant. It’s turned out to be a real winner.

NEWS: How is it a winner?

TUDOR: People go there. They like it. The kids are not resentful. The chapel resonates well with them.

NEWS: What significance does religion have in education at St Philip’s, in this multi-cultural town?

TUDOR: It’s always hard to gauge what religion means to students. It is sowing seeds which may not flower until much later. It’s part of the process of students learning to realise that in the context of the world, it is important that we develop understanding of the way other people think.