Show bull: His hindquarter made him grand champion 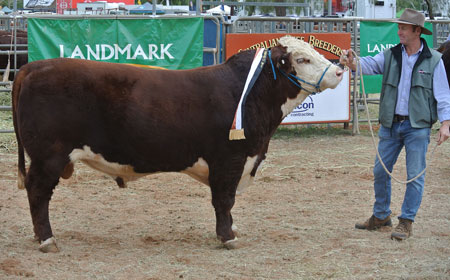 “Length and muscle pattern, being strongly muscled through the top and a really good hind quarter” won a bull owned by Lachy Day the title of Grand Champion of the Show this morning.

Mr Day, from Day’s Whiteface stud near Bordertown in SA, says his bull will be in the annual sale of bulls from interstate tomorrow.

A steward for the cattle section, Lachlan Fife, says although with the rain “it was a bit hard to get the cattle in” the Show yarding is still average, around 130 head.

He says in addition to the interstate bulls the stock in the show yards today are from the Department of Primary Production south of the town, Mt Riddock on the Plenty, Amarroo on the Sandover and Undoolya, just east of the town.

The cattle are in good condition, have a “nice shine to them this year,” says Mr Fife.

The steer sale at Roe Cree was cancelled not because the season is bad but it is too good – the wet weather has made mustering difficult to impossible.

The weaner sale will now be held on July 21 and the fat sale on July 28.

A man who ran a COVID control point was stopped by police with tyre deflation devices 20 km west of Katherine on the Victoria...
Read more
Issue 30

Sir – I've been researching NT football history for many years and I continue to do so. I have just commented on one of...
Read more