Home Issue 5 These people are not homeless ...
Issue 5Volume 23

These people are not homeless … 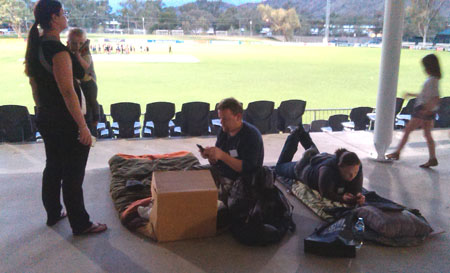 … but they are sleeping out tonight to raise money for those who are.

About 60 people are at Traeger Park for Vinnies’ annual fundraiser, the CEO Sleepout.

They will have dinner from the St Vincent de Paul society’s food van and sleep in a cardboard box, with just a pillow and a blanket.

“Blankets remain one of the most sought after items for people on the streets,” says the program.

“We give hundreds away but we never have enough to meet the demand.”

One in 14 people in the Territory are estimated to be homeless, including those living in overcrowded dwellings, who are couch surfing or sleep in their car.

THE MORNING AFTER (by a somewhat underslept ERWIN CHLANDA)

The average homeless person is no doubt doing it tough. But at least they are likely to find a place to sleep which they don’t share with 30 people who snore.

If we were looking for hardship we got it in spades: The top floor of the Traeger Park grandstand is a big area with an even bigger roof. It is reasonable to assume that sleeping under it one is protected from rain. Not.

In the second climate catastrophe in one week, a gale from the east blasted rain inside, giving sleeping rough a whole new meaning.

CEOs scrambled out of their cardboard boxes and stampeded to the dry end.

On the bright side, after the pumpkin soup and bread roll dinner, the morning was greeted with a sumptuous breakfast of eggs, bacon, fruit juice and so on, put on by volunteers from Mission Australia. Our simulated lifestyle of those who are less privileged was over.

The legendary generosity of our community again came to the fore: Ridiculous amounts were paid for goods and services auctioned by the ultra persuasive Dominic Miller: $50 for permission to sleep in one’s own car, in a tent $70, on a couch (outside) $70, in caravan $200.

But there was also a lesson that the charity dollar in town will go only so far.

Last year, at the first Vinnies CEO Sleepout in Alice, the same number of people took part, about 50. But $110,000 was raised, roughly double of what is expected this year.

In 2015 event Alice’s per-capita fund-raising result was a mammoth 17 times greater than that of Sydney.

There is clearly no fault for the more modest result in the way the show was run: The organisation by local Vinnies manager Melissa Durston and her volunteer force of 150 was impeccable.

But there were fewer high fliers in this year’s sleep-over crowd. An internal workforce re-assignment meant that much of the preparations had to be done by the Vinnies staff in their own time. And at the end of May the Salvos had a successful Red Shield appeal.

She says that was a better use of manpower given that people are often not home, that there are lots of menacing dogs and locked gates.

It seems that bigger slice of the donations cake went there this year.

Nevertheless, the CEO Sleepout will ease again the burden of long and short term homeless, in close cooperation with other frontline NGOs in town, the Women’s Shelter, ASYASS and Mission Australia. They gave accounts of their work on the night, which otherwise had lots of laughs.