No guesses what keeps him smiling 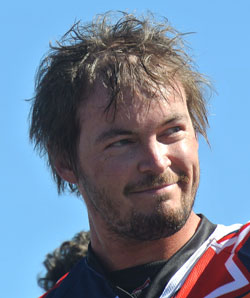 Toby Price became a legend at this weekend’s Tatts Finke for his friendly nature and even temper as much as his astonishing achievements.

After winning the bike event this afternoon he explained what keeps him smiling: “Ah, how could you not when you have done that.

“I’m stoked to come away with two podiums. It’s been a hard weekend. It wasn’t a double but I am very pleased.”

Price (pictured above, just after not just one but two grueling races today), from Aberglasslyn, NSW, won the bike race outright with a margin of almost three minutes, ahead of a field of nearly 400 riders.

This morning he came second in the cars event in a vehicle he had driven only a couple of times.

Two heats in one day and coming first in one and second in the other is an unprecedented achievement in a 41 year old Finke Desert Race.

Second place getter in the bikes was Tye Simmonds, from Burke, NSW, and the next two were local riders, David Walsh (top, right) and Daymon Stokie (below, left left) – maintaining their excellent placings at Saturday’s prologue.

The event run by 600 volunteers was watched by an estimated 12,000 people along the 220 km track (one way) and visitors pumped $6m into the local economy.

The Extreme 2WD truck driven by Chinese Baojun Yang came a surprising 16th outright and 6th in class – a shot in the arm for a growing connection between the NT and the world’s most populous nation.