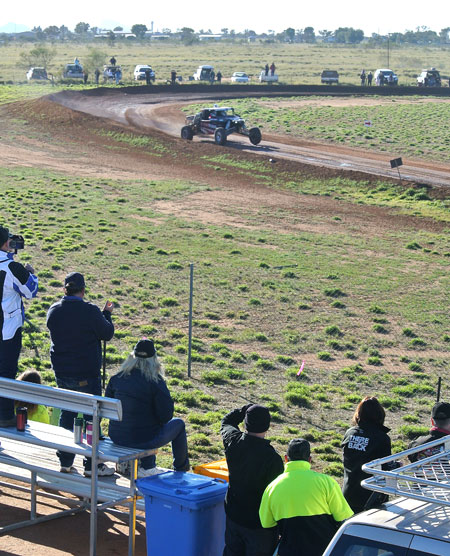 Victorian Glenn Owen finally made it: He won the car section of the Tatts Finke race this morning in a Jimco buggy with the 3500cc Nissan engine, leaving two trophy trucks with huge 6000cc Chev engines in the dust.

It’s Owen’s first Finke win: The closest he’d come to it before was “in 1996 I think,” he said, when he came second “by a five lousy seconds”.

Is it better to have small vehicle?

Immediately after the finish Price jumped into an aircraft to return to Finke to compete in the second leg of the bikes race which he leads.

This morning was the first major offroad race for Dakar winner Price on four wheels – a sensational success.

The bikes are due into Alice at about 1:15pm.

PHOTOS (from top): Owen, seconds from home, passes spectators at the start-finish complex this morning • Owen and his navigator Matthew Ryan on the podium • Price is but a blur as he races across the line in second place.