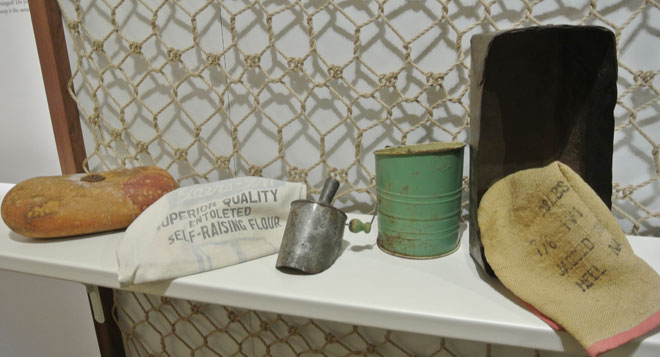 Above: The bread tin, flour bag and scoop donated to the museum by Patsy Hayes, from Derwent Station; the sifter came from Bill Cavenagh, Ambalindum Station; the nail sack oven cloths were donated by Betty Thompson and made by her mother, Ethel Rita Gordon; the grinding stone was found on a house block in town and donated by Dianna Newham; and the seeds (Woollybutt grass) were collected by Pulpuru Davies from the Gibson Desert, WA.

I can remember my grandmother’s hands, the ivory coloured skin, the rings, the well-shaped nails. In the cup of her left hand she would mould the shape of rose petals from fondant. These would be assembled into delicate flowers around sugary buds that stood on nail heads driven into a thick breadboard.

The flowers would later be artfully arranged on tiered wedding cakes, baked by my grandfather. This is how my grandparents earned their living as I grew up. They had several different cake designs, named after their granddaughters. We loved visiting their unit in Bondi Junction, Sydney, especially the workroom in the middle, with its unfolding creations, delicious smells of almond icing and fruitcake, and the stacked bowls, tins and other utensils of their craft. 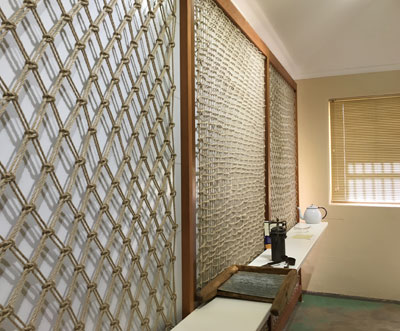 There’s a bread-baking tin displayed in a new exhibition at the National Pioneer Women’s Hall of Fame (NPWHF) that brings these memories back to me. Different objects in the display will have special resonance for other visitors. But in this show, the objects assembled are about more than nostalgia for the past or curiosity about its ways.

Their selective groupings and framing against six woven panels, together with the exhibition title, What’s Work Worth?, prompt other questions.

What’s the link between the bread tin that immediately caught my eye, for example, and the grinding stone with seeds that is in the same group? It’s about food production across cultures, yes, and within that large activity, it’s about tasks that usually fall to women. They were laborious, time-consuming and never-ending, especially so within hunter-gatherer societies. That’s a start.

In the next grouping we see samples of needlework and lace-making, and a child’s sewing machine and iron. We don’t doubt that these toys would have been given to a girl child, who likely grew up with at least some instruction in these ‘feminine’ arts. Such instruction (in the classroom) lasted certainly into my girlhood even if I didn’t later follow my grandmother and mother into significant works of lace-making, such as the tablecloths that are now family heirlooms. 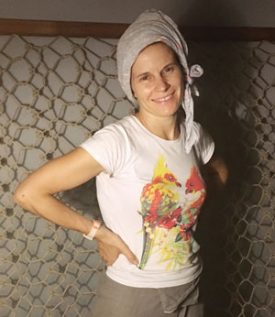 In contrast to these various objects arranged along a narrow shelf are the large woven panels, created by Anna Satharasinghe (at right, this photo and above left courtesy the artist), each one displaying a distinct technique of weaving, knotting and looping. We know that these techniques cross cultures and are age-old, though production is now mainly by industrialised processes, as evidenced in the plastic string bags. In their scale, the panels serve as homage to the ingenuity and excellence achieved in textile arts across millennia, chiefly by women. The worth of women’s work, writ large. In terms of exhibition design, where credit goes to Elliat Rich, they also serve to beautifully unify the whole display, elegant and eloquent in this very confined space of the Old Gaol.

It’s a group of books on the narrow shelf that suggests ideas at work in this exhibition beyond these rather general reflections of mine. There’s The Female Eunuch (1970), by Australian feminist writer of international reputation, Germaine Greer, a life-changing work for many women of my generation, and culture-changing (whether the culture wanted it or not). Mary Wollstonecraft’s A Vindication of the Rights of Women (1792), even if we hadn’t read it, also had its revered place in our pantheon. Two titles are not familiar to me: one is Marilyn Waring’s 1988 Counting for Nothing: What Men Value and What Women are Worth – the echo of the exhibition title is a clue to what this is about. The other is The Australian Aboriginal as a Human Being (1930) by M.M. Bennett – I think of the grinding stone, the commonality of flour and wonder about the rest. 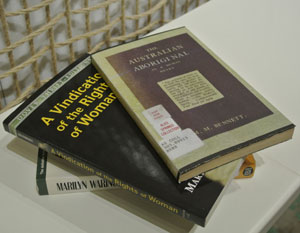 At this point I reach for the catalogue. M.M. (Mary Montgomerie) Bennett, it explains, used a rights-based philosophy, similar to Wollstonecraft’s in relation to women, to argue for equal treatment of Aboriginal Australians by the state (which more than 80 years later is still a live issue). She was particularly opposed to the government policy of child removal. From a little further reading I have since done, her emphasis was particularly on the separation of mothers from daughters, the traumatic disruption of family life, and the conditions “akin to slavery” of the domestic service into which the girls were sent. We have to be grateful that such a voice was raised at that time (and hers was not the only one). I am grateful to the exhibition for making me aware of her.

More than is usual for most exhibitions, the catalogue is essential reading. It traces the delving into ideas behind this exhibition particularly by its curator, Dianna Newham, in collaboration with historian Megg Kelham, and greatly enriches consideration of what you are looking at (shown unfettered by interpretive labels).

They have examined the role of museums, and the NPWHF in particular, in representing work and the way in which that reflects and constructs its value and indeed the value of women and men. They are unabashedly feminist in approach, though honouring the idea of “many feminisms” (their interest is in examination and exploration, not dogma). They have read widely and discussed widely between themselves, as well as with Rich and Satharasinghe and a wider group in “community-based conversations”. 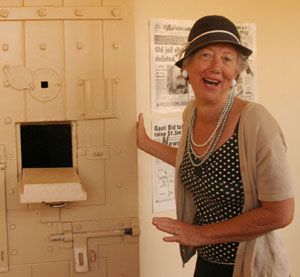 They step away from a focus on women ‘making it in a man’s world’, and home in on the humble objects used or produced in what is seen as typically women’s work. They challenge the small value we may allocate to these objects as part of an oppressive apparatus that fails to acknowledge that domestic work is as important to the gross national product as industry. This was the radical thesis of the economist Marilyn Waring whose work “transformed the way the United Nations counted the wealth of individual nations”. They explore, through their readings of other key texts, the questions raised by this repositioning of the worth of domestic (‘women’s’) work. And they tell this large story in the Central Australian context.

At right: Historian Megg Kelham as ‘Mrs Muldoon’, bringing history to life at the Old Gaol during Heritage Week, 2012.

The introduction of industrially produced flour, for instance, meant more than a change of diet (with its own very significant consequences) for Aboriginal people. It was an instrument of colonial government, which helped reduce the violence of colonisation, as historian Tim Rowse has shown in White Flour, White Power (1998). It also liberated Aboriginal women from the time-consuming task of collecting seed, processing it and baking it, so undermining the political power of the old men in their society, as anthropologist Frederick Rose argued in The Wind of Change in Central Australia (1965). 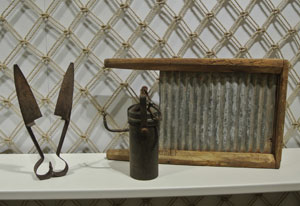 In writing about the group of objects that includes shears(at right) used by donor Betty Thompson to shear sheep (challenging the perception that this was a men only job), Newham and Kelham also draw attention to Margaret Bain, “Centralia’s last missionary”, who argued that sheep, more than cattle, provided amenable opportunities for Aboriginal family groups. Aboriginal women were often employed as shepherds by Ernabella Mission, for example, and could work on country with their children, hunting and gathering as they had ever done.

When thinking about women’s roles as mothers and sexual partners (which can be considered as various forms of exchange) Newham and Kelham scoured the NPWHF collection for pertinent objects. They came up almost hands empty – an interesting reflection itself on the invisibility of these fundamental forms of women’s work. On display, apart from an old glass infant formula bottle, is an administrative document dating from 1937, listing residents of Tennant Creek in relation to their capacity to pay local sanitation rates. Under the heading ‘Occupation’, one resident is described as “Lady easy virtue”. Three words that speak volumes and bring into the exhibition key feminist themes as explored in iconic works such as The Second Sex by Simone de Beauvoir, The Female Eunuch and other texts that are very usefully outlined in the catalogue’s Selected Chronology of Ideas. 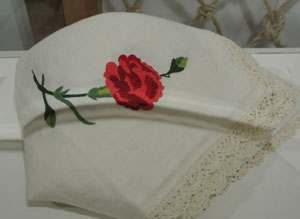 This exhibition is only the beginning of NPWHF’s exploration of this theme. They have applied for funding for a second stage, which will use audio and visual material, collected in interviews with people in the community and from various visual archives. The material will be thematically related but not conventionally integrated, so viewers will need to actively link what they are hearing to what they are seeing.

With these fresh, stimulating and sometimes challenging approaches to curation of its collections, NPWHF will reinvigorate its presence in the community. Recognition is due to the board, as noted by Bev Ellis on opening night: its development “of an atmosphere of collective recognition of the important role women have had and will continue to have in the development of our country” is the foundation on which this exhibition is built.

My grandmother would have really appreciated What’s Work Worth?. She would have felt her lifetime of work – in raising children (through the tough Depression years), in the family business, and as a craftswoman – properly acknowledged; and she would have thought the ideas and questions it raises well worth pursuing. Two generations on, I appreciate it for the same reasons.

Below: My grandmother, Avery Nicholson (nee Britt), with my mother Patricia and daughter Jacqueline in 1989. And one of the wedding cakes Avery crafted with my grandfather, Jack Nicholson. 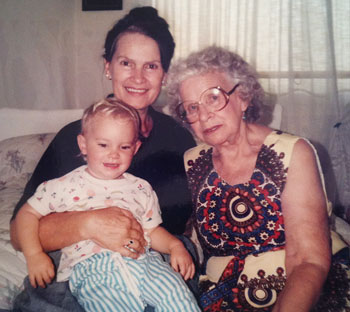 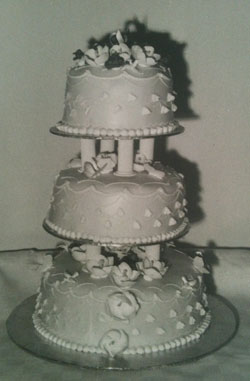 By GEOFF MIERS Want to get the kids involved in the garden then suggest they help grow some strawberry plants. Strawberries are great fun, they are...
Read more
Issue 5

By ERWIN CHLANDA A Domestic Violence Order was given to Shane Lindner, the chairman of Lhere Artepe, the Alice Springs native title organisation, designed to...
Read more
Issue 1