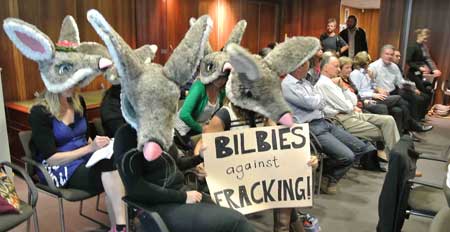 Sir – We condemn the passing of legislation that will give sweeping authority to the fracking industry and Mines Minister to self-regulate over risky shale gas fields.

The Petroleum Amendment Bill (2016) passed with the support of the NT Government and Independent member for Arnhem Larisa Lee, and was opposed by NT Labor and Independent MLAs Delia Lawrie, Kezia Purick, Alison Anderson and Robyn Lambley.

The passing of Minister Tollner’s Petroleum Act Bill means that our elected members of Parliament have now lost their right to decide whether or not the proposed NT fracking regulations are up to scratch.

All decisions on the “level of acceptable risks” from fracking now lie with the Mines Minister, who has proven incapable of regulating mining in the Territory in the best interests of people and the environment.

The NT Government’s proposed regulations fail to implement key recommendations made by Dr Tina Hunter in her independent review of the draft petroleum regulations, including Recommendation 11 which states: “Well inspection by an independent certified third party inspector should be a mandatory component of the regulatory regime for drilling, and should be considered during the drafting of the relevant regulations.”

In rushing this Bill through, the NT Government is failing to take on board the recommendations of independent experts to regulate against shale gas well failure and water contamination.

The NT Government said it wanted to get fracking regulation right but this Bill is an abject failure even by their own standards.

The Petroleum Amendment Bill now allows the Mines Minister to enact regulations that offer no certainty that our water and environment will be protected from the risks of large scale fracking gas fields.

This Bill was rushed through in the minimum time in Parliament for one month. Details of the updated regulations that the Bill seeks to enact were only made available for public scrutiny yesterday.

The integrity of the gas wells is the most serious issue when it comes to onshore shale gas hydraulic fracturing, says James Wright, an underground mining expert and member of the Frack Free Adelaide River community group.

He says these regulations leave us with no safeguards to enforce well integrity testing. I know based on my experience working in underground mining that faults, shears, corrosion and caves all exist where fracking companies plan to drill and can cause havoc on steel and cement.

Territorians are watching Parliament and candidates closely in the lead up to the upcoming election. Anyone looking to be elected cannot afford to ignore the widespread concerns and opposition to onshore shale gas fracking.

PHOTO: Demonstrators in the public gallery of the town council in July 2014.