Skywalk Budget item could be game changer for Alice 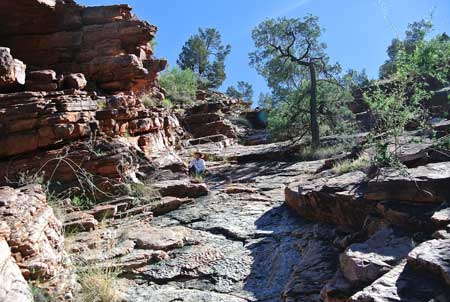 This line in yesterday’s Budget is a likely game changer for Alice Springs: “$10m for a skywalk tourism experience.”

The location is not yet determined, but it’s a no-brainer: The splendid ridge of the MacDonnell Range between The Gap and Flynn’s Grave.

The start or end [# 1 on the Google Earth photo above] of that walk is a 10 minute stroll from the tourism precinct [# 2]. The reward are the magnificent views into the West (photo at bottom) and East Macs, of the town and its hills to the north, the mostly flat country to the south, and the delight of soaring eagles, roos, and plants quite different to those on the land below.

Now stand by for:–

[A] The community gets behind this project wholeheartedly, creating a sensational nature experience which works 360 days a year, unlike the one-day or one-week wonders, no matter how fabulous they may be, on which we’re currently putting our hope for getting the tourism industry out of its slump. We are creating an assets that will last for generations.

[B] Divisive bickering rises to a crescendo, with irrational redneck fervour in one corner and the perpetually fragmented Aboriginal interests in the other. Lack of leadership blows another great opportunity, and we’re sliding further towards being a welfare town. And Aboriginal culture, rather than being seen by the world as a treasure of our region, will be regarded yet again as an obstacle. And gone will be the opportunity for Aboriginal people to make a dollar as guides and storytellers.

The beauty, the mountain range, is already there. Practically nothing needs to be built, bulldozed, dynamited or whatever. Even signs for directions and warnings can be provided through apps on GPS equipped mobile phones. Local IT whizz Edan Baxter has created a system that can be adapted to that purpose.

Because there is no need for physical changes, most sacred site concerns would be taken care of. A similar point was made by the Aboriginal Areas Protection Authority (AAPA) in connection with the Festival in Light.

Concerns that remain need to be discussed with respect and good will. Trouble is, the “official” native title organisation Lhere Artepe is going through yet more internal strife, and some key traditional owners are outside the AAPA.

No-one other than the Aboriginal people can fix this: As the business community has the Chamber of Commerce and the tourism industry has Tourism NT, the town’s Indigenous community needs to have a single go-to with authority to negotiate, a phone number and an email address. That, for better or worse, is how the world operates these days.

Meanwhile the Budget papers say: “Consultation will begin with traditional owners and stakeholders in Central Australia.” 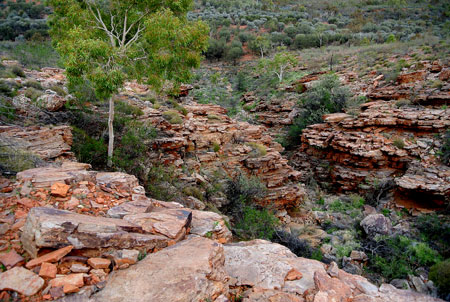 Most locals have been up there at least once: From Flynn’s Grave  [# 1] the walk, and a few metres of easy climb, to the top takes around an hour. Then it’s around three hours to the towers and down to The Gap.

But that is not all, by any means: The southern flank has some 12 rocky gullies (three photos in the text), rivaling in beauty King’s Canyon, and 10 minutes by car from the post office – not five hours to Ayers Rock Resort or King’s Canyon.

A typical gully takes around five hours for the return trip to the summit. My family and I have “done” almost all of them, over the years.

And at the foot of the range are some glorious camping spots.

So far the town’s officialdom has ignored this immense potential asset.

The town council, in what surely was one of its less than glorious decisions, closed the road past the landfill [# 4] along the bottom of the range.

Access to the gullies is now via a much longer route, via Ilparpa Road, turning north on a dirt track along the western fence [# 5] of the sewage plant.

What’s more, the council is now planning to extend the dump west further into the Desert Park land [# 6]. 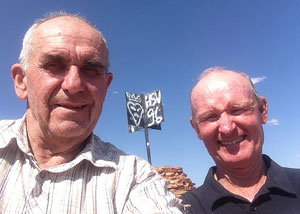 Cr Steve Brown (at right in the photo, with the writer of this comment, at the trig point on top of Mount Gillen ridge) in the past signalled this would be done over his dead body: He advocated keeping the new transfer station and the tip shop where they are, but to take the garbage to a new site south of town, in or near Brewer Estate.

The amount of garbage produced is one three-trailer road train a day. It could bring back to town soil dug from the new dump site and use it to cover the present one.

With a bit of planning, all that could have been done in cooperation with the construction of the hugely unnecessary railway overpass. Another inglorious council moment.

It is of course significant that Cr Brown is the CLP candidate for Araluen. He no doubt has the ear of Chief Minister Adam Giles because he stands behind him every time Mr Giles has his photo taken in Alice Springs.

And there is more: Gazing south from the top of the Mount Gillen ridge a significant feature is the sewage plant, known by most as the turd farm: It smells, overflows at times into the nearby swamp, breeds mozzies, evaporates billions of liters of water a year in the driest part of the driest continent, and is overdue for replacement by a recycling plant.

And that would open up two square kilometres of prime real estate owned by the people of the Territory and not encumbered by native title.

Meanwhile the Independent Member for Araluen, Robyn Lambley, says about the description in the Budget papers: “This is an old idea that has been thrashed around by many for decades.”

She says “skywalk adventure tourism experiences” are not an economic priority for Central Australia “given the tough times many Centralians are experiencing.

“A simple bus tour taking people up to the top of Mount Gillen would have saved us all a lot of money,” she says.

This is how Parks Minister Bess Price describes the project in a Budget statement: “Tourists will get a bird’s eye view of spectacular Outback scenery under a $20 million initiative to build adventure experiences, including skywalks, at Territory national parks.
“Concept plans have already been revealed for a skywalk at Nitmiluk (Katherine Gorge) National Park.”