Idea for street kids gets 'no' from Giles 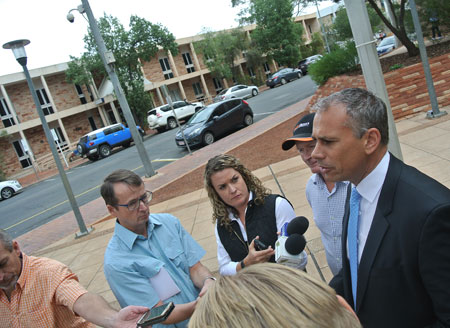 A proposal to convert the old police station in Parsons Street, now vacant, to a facility for children who are at large at night, and hold them there until they are picked up by their parents, has been rejected by Chief Minister Adam Giles.

The old police station is pictured in the background of the photo at right, taken during the doorstop by Mr Giles yesterday.

The idea was put to the Alice Springs News Online by a reader working in law enforcement and who has a long record in voluntary youth work.

The facility would be for juveniles who are at risk because they are without supervision during the night. It would also include young people now known or suspected to be committing crimes such as car thefts and break-ins.

Our source, who asked not to be named, says these youth should be held at that facility whether they consent to it or not. If the parents don’t pick them up, or are considered to be unfit to look after them, they should be taken into care by a government instrumentality, our source argues.

We put the proposal to Mr Giles at his doorstop. He said there “there is a range of different youth services” in town.

When we put to him that attendance at these is optional he said: “We are not going to mandate the forced lock-up of kids who may be walking around the streets at seven o’clock at night. We are not that draconian. But we are willing to support responses that support police, and also support the community.”

Mr Giles had earlier announced legislative changes with respect to the courts the presumption by the courts that juveniles being charged are granted bail.

We asked Mr Giles about antisocial behaviour in the streets and the negative effect this has on locals, and on efforts to boost tourism.

He said: “There is a range of social norms that we expect everybody to abide by. Of course we have different cultures here in the NT, people who communicate differently. And we’ve got to respect that. It’s actually a good thing about the NT that we are diverse, and we are different. I actually support it. [But] we also need to make sure people don’t present themselves in a position of anti-social behaviour.”

Later in the doorstop we asked Assistant Commissioner Jeanette Kerr to comment. She said: “Shouting, swearing, fighting and other anti-social behaviour are an offence and yes, we do intervene. It’s an absolute priority of the NT Police.”

Mr Giles also announced legislation compelling people who spit on police officers or bite to undergo health checks to determine if they have an infectious disease.

Laws would be passed to provide similar protection for “frontline workers such as doctors, nurses, paramedics and firefighters”.

In a media release Mr Giles said: “It’s a stressful time for the officer and their family to wait three months after being spat on or bitten by an offender to get the medical all-clear.

“This will give them peace of mind much more quickly, or enable treatment to begin immediately if that’s required.

“We’re saying to the offender that you shouldn’t be biting or spitting on a police officer in the first place, but if you do we’ll mandate legislation that you have to be tested.”