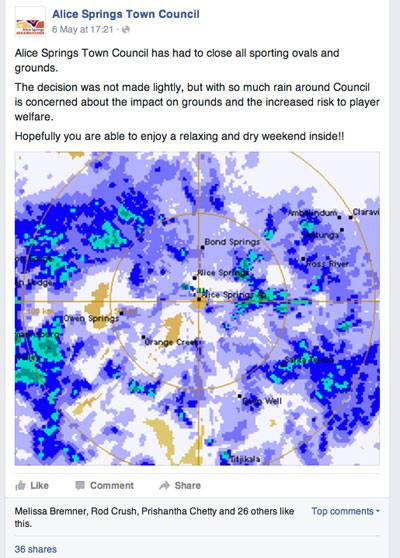 The Town Council’s closure of multiple sports grounds after heavy rain the weekend before last has launched a virtual political manifesto from Councillor Steve Brown.

“I say enough is enough, time to make a stand against this appalling mentality that threatens our basic individual rights, our freedom!” he wrote in the background to his motion, seconded by Cr Jamie de Brenni, to modify council policy in this matter.

It should be solely up to sporting bodies themselves to make a decision on the state of their grounds, he argued at first. And it should be done at the grounds and at the proposed time of play.

By last night’s meeting, Cr Brown had cooled down a little and was ready to redraft the motion, allowing for council’s interest in the state of the grounds of which it is custodian. The decision should be taken by the sporting body in consultation with the Mayor or representative, he now proposed.

Cr Brown contended that it has been only recently that council has taken over the decision-making on whether play can go ahead, seeing it as a case of “creeping over-bureaucratisation”: “If allowed to follow to its logical conclusion, [this] will see the general population sitting on the sidelines in smothered comfort, gazing at a field of grass upon which no one is allowed to tread!”

However, director of Technical Services, Greg Buxton, said the decision to close or not had always been council’s in the eight years that he has been in his role. He said he had inspected grounds early on the Saturday morning after 17 ml of rain had fallen overnight and considered them too saturated for play, especially given the BOM forecast that more rain was expected. 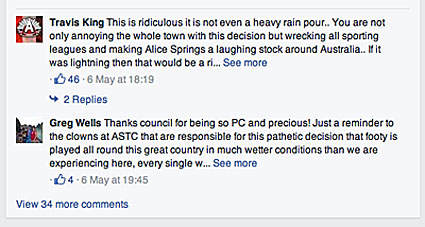 As it happened the further rain did not fall until Saturday night, and Cr Brown, backed by Cr de Brenni, argued that the conditions should have allowed play to go ahead during the day. Cr de Brenni pointed out the difference between the impact on wet grounds of junior and adult players and was particularly annoyed that junior soccer had been cancelled that weekend.

Cr Jade Kudrenko asked whether rain sensor technology, already installed on the ovals, could provide an objective measure of their saturation. Mr Buxton took that question on notice. Cr Kudrenko also thought that council’s decision-making on the issue should stay with operational staff, not elected members.

Cr Brown thought that if such a decision involved putting your “neck on the line” it should be the responsibility of an elected member.

In the final wording this question remained unresolved. The motion now proposes that the decision will be made by council in consultation with the principal representative of the relevant sporting body, at the grounds and at the time of play.

CEO Rex Mooney will do “a due diligence” on the matter in relation to council’s liability before a vote is taken.