Federal Budget cuts in the volunteering sector could not dampen the mood at a breakfast to celebrate local volunteers, held on the Council Lawns on Saturday.

Over the next four years funding for the Department of Social Services’s Strengthening Communities program will be slashed from $40.5 million to $28.4 million.

This money goes into bodies like Volunteering SA&NT, whose local face is Dianne Logan, the organiser of Saturday’s breakfast. She helps match willing hands with those who need them. And the need is always there, even with a classic volunteering group like the Scouts. 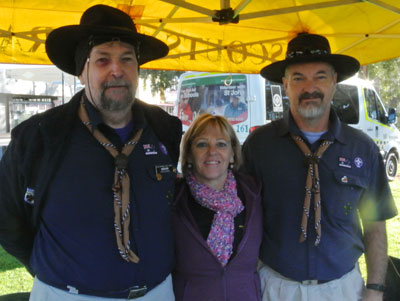 In Alice they are particularly hoping to get more parents involved, whether it’s in doing committee work, becoming a leader, doing maintenance, or fund raising to send local scouts to the world jamborees. In recent years Alice scouts have gone to countries like Sweden and Japan and a couple will soon be heading off to Switzerland.  The young people have to fund raise themselves but the Alice Springs Scout Group also helps out.

At right: Chris Wilkinson, aka ‘Ngiyari’ meaning ‘thorny devil’ in Pitjantjatjara, with Debbie and Steve Ashley, aka ‘Mrs and Mr Baloo’, characters from Rudyard Kipling’s The Jungle Book, used as a motivational book by Cub Scouts.

Volunteering always involves giving – of your time, energy and skills – but it can give back too.

Daniel Knox, a volunteer with St John Ambulance, found that it was a good way to get a foot in door with work. He started off as a St John cadet at school. By the time he’ graduated he had the qualifications that allowed him to work at the hospital as a patient care assistant.

Now he’s on staff at St John, working in patient transport: “I got the qualifications through volunteering.”

For Emma Gaskon, a Year 11 student, the St John cadets has been a good way to meet new people and learn new skills: “I’ve got lots of knowledge I can apply now.” 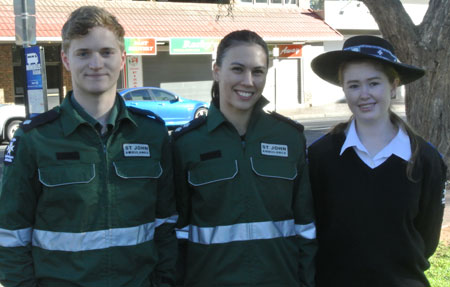 Sarena Hyland is one of the volunteers who trains the cadets. She came to Alice three years ago from Perth. She’s an architect in her day job, but loves her involvement with St John: doing first aid at events like the Show, the races, the Finke; training every week.

They do “badge work”, similar to Scouts, in things like caring for animals and fire safety, as well as competition training, preparing them for divisional, Territory, national, and even international contests. Typically these involve a mock scenario in which contestants have 10 to 20 minutes to manage the situation and treat all the patients.

Sarena came first in the nationals in 2013, and second in 2014. The Alice Springs cadet teams she helped trained have competed in the nationals for the past three years and took out second place this year.

Volunteering in Alice Springs is generally going strong. A decline in the NT can be attributed mostly to a decline in Darwin, where from 2010 to 2014 volunteers dropped by 18%. In Central Australia the drop was just under 3%: more than one third (36.1%) of the local population was involved in volunteering in some way.

In some areas though the volunteer task is more challenging than in others. Alzheimer’s Australia in Alice Springs, for example, has only one volunteer on their books and would dearly love more. 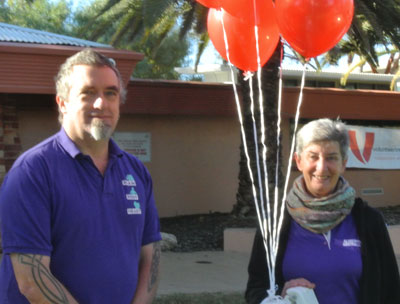 However, because dementia is quite complex, volunteers need to be trained to deal with it. Once they have the skill base, the Alzheimer’s Australia staff buddy with them until they feel confident enough to go it alone. This generally means taking a dementia sufferer out for coffee or visiting them at home. This helps not only the person involved, but offers some respite to carers from their 24/7 responsibilities.

“A lot of people are scared of dementia but really there’s nothing to be scared about,” says Lowell Wood. “The training provided is quite comprehensive and we never put anyone into an environment that’s not safe.”

Alzheimer’s Australia has about 20 clients in Alice Springs but Ms Lowell says that number is only the tip of iceberg. She says most people don’t come forward: they and their families tend to “soldier through”. In particular, there is a lack of awareness of younger onset dementia, affecting people under the age of 65, whose incidence is growing in Australia.

Alzheimer’s Australia puts strong emphasis on education and awareness, promoting a five step program for maximising brain health to service providers and the public, as well as support programs for carers.