Footy plus a job is a formula for life 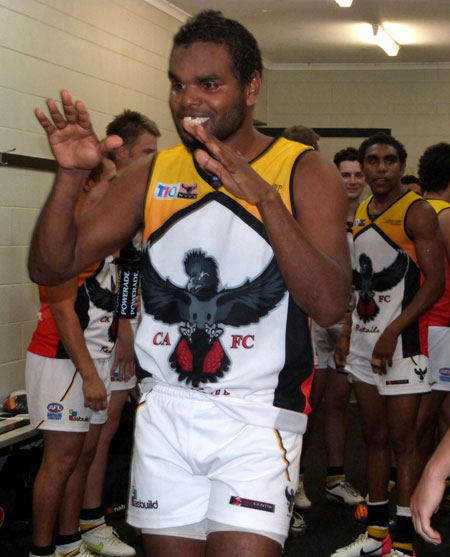 Kenny Morton (pictured) is 29 years old, he is married and has two children, a boy aged three and a girl, two.

He works in the South32 GEMCO manganese mine at Groote Eylandt in the Top End as a truck driver and in mine services.

Part-way through a carpentry apprenticeship he took up that job because it paid better.

Well, this is the Northern Territory, Aboriginal unemployment is endemic, millions are spent on job program after job program, armies of welfare bureaucrats are mobilised, all to little avail. Those who have a job are endlessly humbugged.  Many people drink too much and many young people are on drugs. And so on, and so forth.

Not Kenny. He is Aboriginal. He turned his back on that misery “six or seven years ago when I became involved in Redtails,” he says.

“I heard from the guys, and I told myself, I want to be part of this. It is history in the making.

“Drugs and alcohol – I was never really into that stuff,” he says, but it was all around him. “I didn’t want to do the same.”

Redtails, linking football with professional achievement, is a Central Australian volunteer initiative embracing about 85 men and 35 women (the Pinktails), aged 16 to 30. And it’s growing.

Kenny has kept in touch and maintained the motivation in his new home 1500 km to the north.

He’s a burly guy with an easy smile and laid-back manner.

His work life is not in conflict with his favourite Aboriginal pastimes: hunting kangaroos when this Anmatyerre man lived near Ti Tree.

Now he’s swapped his rifle for a fishing rod to make the most of his new island home with the family of his Anindilyakwa wife.

He trains and plays Aussie Rules with the islanders, mostly midfield “or wherever the coach puts me”.

He teaches the game to the kids, spreading the Redtails word in the town of Alyangula, “just me up there, from the desert’.

“We talk about footy, about life, what comes into our minds, stuff friends talk about.”

The mining company also has a Redtails-style philosophy, supporting their workers playing footy, and that extends to chartering aircraft to take them to neighbouring islands or the mainland for games.

Kenny estimates about half of the company’s staff are locals, the rest are FiFo crews.

How did he get the job?

“About 10 us applied and three were picked. We got lucky. They signed me up and said be ready for work on Monday, at 5.30am,” says Kenny.

What does the future hold in store for him?

“Teach people sports and life. The main thing is raising my kids and being a good father and husband. Kids go to school, go to college and graduate, achieve their goals, whatever they want to be, they can be it.”