CLP Senate candidate away for half the campaign 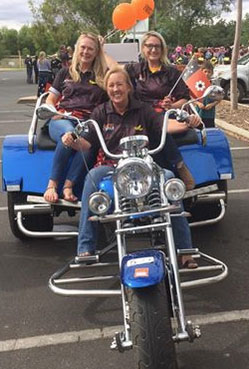 The Country Liberal Party’s number two Senate candidate in the NT, Jennifer Lillis, will miss half of the Federal election campaign because she will be overseas for a month.

She could not be contacted today but the number one candidate, Senator Nigel Scullion, says his running mate had made arrangements for the trip before the July 2 elections became a likelihood.

He says he is not clear where she is going but sources say it is France.

Senator Scullion says family matters are the reasons for the absence of Ms Lillis.

She is a key functionary in the Alice Springs CLP branch and a former president.

She is pictured during the Bangtail Muster parade in Alice Springs last week, at left on the back seat of a trike driven by CLP candidate for Lingiari Tina McFarlane, with candidate for Namatjira in the August Territory election, Heidi Williams, at right.