The story of a bag snatch in the CBD 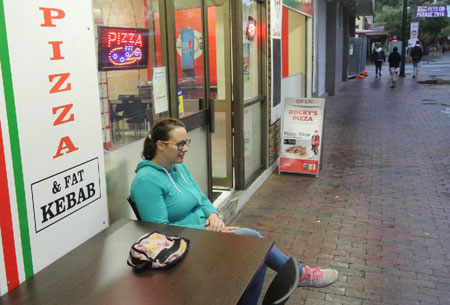 I walked into Rocky’s Pizza and ordered the large pizza at 9.45pm. I was told it would take about 15 minutes.

The tables and chairs inside the shop were all stacked up for closing time.

I would have liked to sit inside the shop as the time was quite late, but sat outside, on the chair to the right of the doorway.

I placed my green, red, white and black handbag bought in Shanghai, decorated with a bird and a tree, on the brown square table to the right of me.

The handbag was about 30 centimeters away from me, to the right side of my hand. As five large Australian men passed me, the thought crossed my mind, should I hang on to my handbag?

No, it will be alright, I thought.

Then along came two thin, tall, light-brown Indigenous males who to me looked to be teenagers.

They were dressed in maroon and grey T-shirts with pale grey shorts, flat Kmart looking shoes, with socks.

They looked unsuspicious and were well dressed and groomed. I thought to myself again, should I hang on to my handbag?

Again I thought, nah, it will be alright.

The boys lined themselves up directly in front of me, facing the street toward the council chambers, then snatched my handbag and ran toward the taxi rank across the road, fast as lightening.

Immediately the manager walked outside with me.

Three middle aged looking Indigenous adults, a man and two women, came over from the taxi rank and told me the boys were from Hermansburg, gave me their names and where they were staying that night.

I waved to a policeman who was turning right from Gregory Terrace into Todd Street, in a twin-cab paddy wagon.

He did a U-turn and parked outside Rocky’s Pizza. He was a sergeant.

The three Indigenous people gave him the names of the teenagers and the address where they would be staying that night. The police officer nodded his head and said: “Yes, we have those boys on our list.”

Then two undercover detectives also pulled up outside Rocky’s Pizza. They heard what the three Indigenous people told the sergeant.

Then two more uniformed policemen drove up and they took over the handling of my case, asking me “where was your car parked?” and “does your husband have a second key?” to which I replied “not that I can remember”.

They said to me: “You will need to get this car off the street. Those boys will come and click away to see which car the key will open. Then you will lose your car.”

I agreed to make a statement in writing while a recovery truck driver loaded my car on a trailer.

I asked the policemen: “Where do you think my handbag is right now?”

They said: “It is probably in the Todd River. They may have taken the cash and tossed the bag.”

The wallet was brand new, bought from Sank at half price for $35. It held every card including both mine and my husband’s bank cards, thankfully with no money on either. I only had $15 cash in the wallet. A key ring had my house keys and the car key on it.

I had all my locks changed at home.

Since filing the report that evening, I have walked into the police station three times asking about the whereabouts of my handbag.

Each time the response was “haven’t found boys, they must be out bush”.

The constable responsible phoned me two weeks ago to inform me that they expected the boys to appear in court the following week.

I was told on the night of the theft that I would be required in court if the boys did not confess to stealing the handbag.

The theft occurred on March 16. That is seven weeks ago. I still have no idea what happened with my property nor with the boys.

We asked the police if they wished to comment and they said they would provide information on Monday. When it comes to hand we will update this report.

PHOTO: The writer in the location where the theft took place.

UPDATE 10am May 10: Police say investigations are continuing.