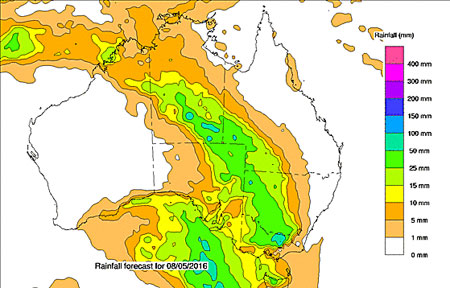 From late tomorrow a cloud band through Central Australia is expected to bring significant widespread rainfall to southwestern parts of the NT, says Jude Scott, of the Bureau of Meteorology.

This has been predicted by Alex Nelson in a special report in the Alice Springs News Online on April 30.


“Rainfall could be around 100mm over a three day period, tomorrow till Saturday, in southwestern parts of the NT, including Yulara, Curtin Springs and Yuendumu,” she says.

“To put this into context, the highest rainfall for the whole month of May in Yulara was 109.6mm (in 1988), with the May monthly average being 13mm.

“A flood watch is current for the western inland rivers – widespread areas of inundation can be expected in the Tanami and Lasseter districts over the weekend.

“This is expected to affect road access in many parts with some roads becoming impassable. Some communities may also become isolated.

“Alice Springs is likely to see some heavy rainfall between Thursday and Saturday, with current forecasts suggesting up to 50mm, which should be enough to get the Todd River flowing.

“The focus of the rainfall for this event is along the western border of the NT, in the Lasseter, southern Tanami and western Simpson districts,” says Ms Scott.

We are also likely to see showers and isolated storms over the Gregory, southwest Barkly, northern Carpentaria, Daly and Arnhem districts from Sunday and early next week as the cloud band moves in a northeasterly direction.”