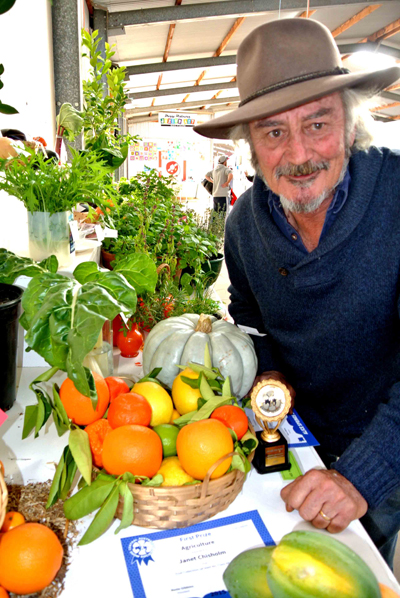 Form a group, create a collection and enter it into the show: That’s the challenge put out by agriculture stewart Geoff Miers (pictured).

And that means any group of three: Concert pianists, suburban neighbours or 10-year-olds, he says.

Or for the adventurous: “A39 Bush Tucker Collection.”

You’ll be in the running for the Grand Champion trophy (most outstanding exhibit), or the Highest Aggregate, Open Section trophy or Highest Aggregate Citrus & Fruit Classes trophy – all donated by the Central Australian Show Society.

Mr Miers says citrus won’t be having much of a chance because in town it has been devastated by grasshoppers. But there is plenty else.

“Collections give more opportunity for the unusual,” he says. “They leave giant pumpkins in the shade.”

Meanwhile Show president Rosie Gibbins says this year’s fixture, the 59th, will be special because held on July 1 and 2 it will coincide with Territory Day. The usual great fireworks will be on the holiday Friday.

“Rob Bast will be here to do some amazing chainsaw sculptures, and local band Later Scratching will close out the 57th Show on Saturday night.”

As they say in Alice, for all those people you only see only once a year, the Show is the place.
The crowd is usually two-thirds of the town’s population.