ABOVE: Campers at Blatherskite Park before the grounds were closed to them under pressure from private caravan park owners. BOTTOM OF REPORT: Part of an avalanche of Facebook comments hostile to Alice Springs.

As the annual grey nomads migration north is getting under way, Alice Springs is copping a hammering from motorhome and caravan travellers over the closing of low-cost overnighting facilities at Blatherskite Park, also known as the show grounds.

Dozens of Facebook posts are saying travellers ought to avoid staying in the town and buy only a minimum of provisions from local businesses.

Town Council member Brendan Heenan comes under attack in allegations that as the owner of the MacDonnell Range caravan park he had a vested interest in the closure.

Cr Heenan was a vocal opponent of the grounds being used as a caravan park, but the Town Council does not own nor control Blatherskite Park: It is owned by the NT Government and managed by a trust run by volunteers.

Mr Heenan says Blatherskite Park does not pay rates and “undercutting all the commercial properties”.

He says the operation was closed after representation by the caravan park owners’ association to the government.

The show grounds can still be used for “overflow” of visitors when all the other parks are full. This will be managed by Tourism Central Australia which will charge similar rates to the commercial parks.

Mr Heenan also says camping of participants in large events, such as the Ulysses bikers’ club national convention, will still  be permitted.

He says about the RV group: “They want something for nothing.” He says the industry, a major employer in the town, would collapse. There would also be major problems of handling waste an the chemicals used in RV onboard toilets.

The trust, which ran the camping operation as a fundraiser, has recently stated that the closure is putting it into serious financial difficulties. A string of community and sporting clubs uses the grounds, and the hugely popular annual show is held there.

The point made by Cr Heenan and other councillors was that a facility with access to government funds ought not to be in competition with private enterprise.

The NT is clearly behind the eightball in the lucrative drive market: The Campervan & Motorhome Club of Australia, which has more than 66,000 members according to its website, promotes “RV friendly towns”: 58 in NSW, 54 in Queensland, 41 in SA, 41 in Victoria, 46 in Tasmania and 46 in WA.

There is not a single one in the Northern Territory.

This is what the website Free Choice Camping – 13,442 Facebook likes – said on Saturday: “Well, it’s finally happened: The Alice Springs show ground is closed to camping.

“Some time ago we ran this story (which we will run again) and now we hear that the axe has finally fallen on the poor old show ground according to reports on the Caravanners Forum which no doubts need the income to support this community facility.

“The real pity is the owner of the park kicking up most of the stink is a local councillor.

“To quote in part from the CV listed on the council web site: ‘Councillor Heenan and his wife Bev are the owners of a successful caravan park’ and ‘Councillor Heenan’s community involvement includes roles as President of the NT Caravan Park Association, CRVA National Board member and as a Bindi board member’.

“It was only recently we read an article about the family entering the tourism business and starting from nothing and building a highly successful business,” continues the Free Choice Camping Facebook page.

“It made interesting reading and if we can find the article again will publish it. We congratulate them for that but in a time when the industry is booming, and industry published figures prove that, and more often than not you can’t get a site in Alice we have to question the wisdom of this action.”

Camping at Blatherskite park cost about half as much as Cr Heenan’s park charges, which is of exceptionally high standard and has won a string of Brolgas.

Yet the dozens of social media commentators don’t hold back:-

“Last visit we stayed two weeks and spent money all over town. Forget any more of our money,” says one post. Others stated:–

• I think Alice will be bypassed more now.

• Why does the general public have to be placed into the position of cash cows for a selected few?

• Easy. Everybody boycott his park and show what happens.

Stephen Schwer, CEO, Tourism Central Australia, said today: “The team at the Alice Springs Visitor Information Centre are as always happy to help travellers with accommodation requests. They can recommend accommodation to suit all tastes and budgets.
“Blatherskite Park is currently not compliant for camping, however I am working with the board of the park to work out how the site can become compliant.
“Quality and safe accommodation options are important to ensure visitors to Alice Springs have the best possible experience.” 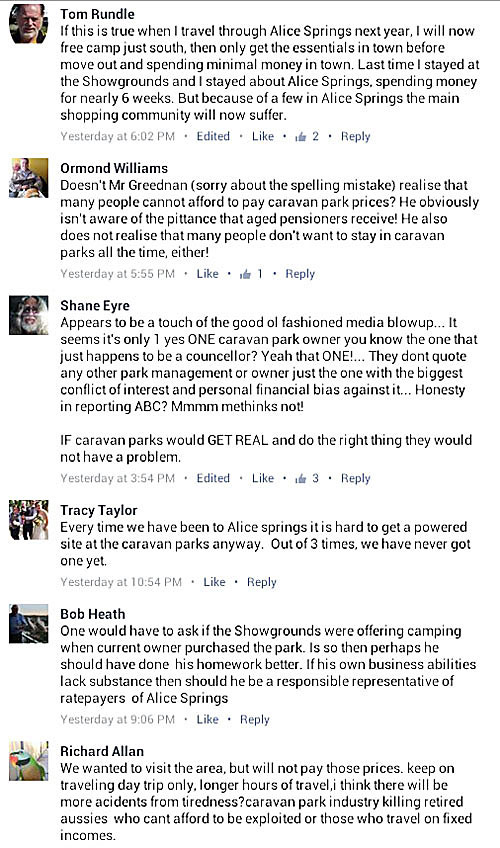 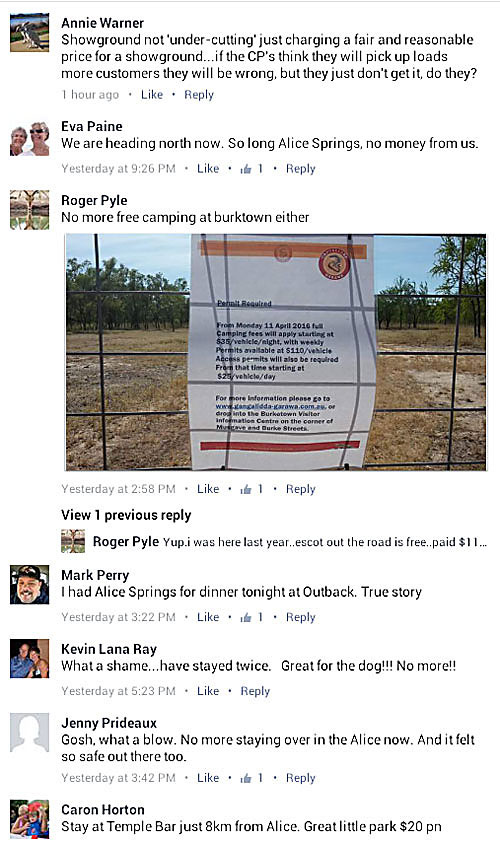 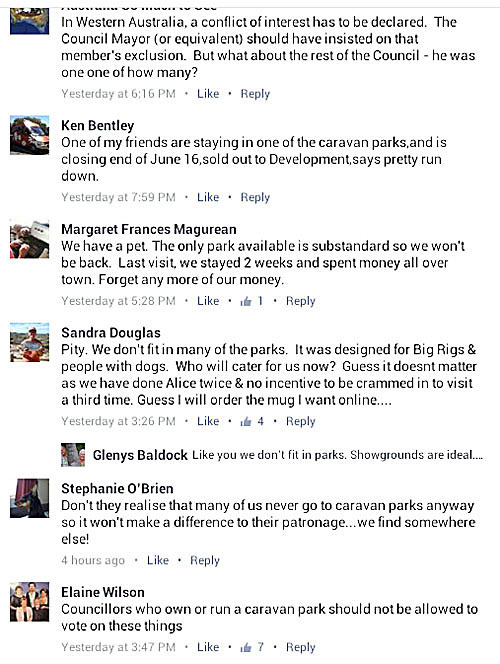 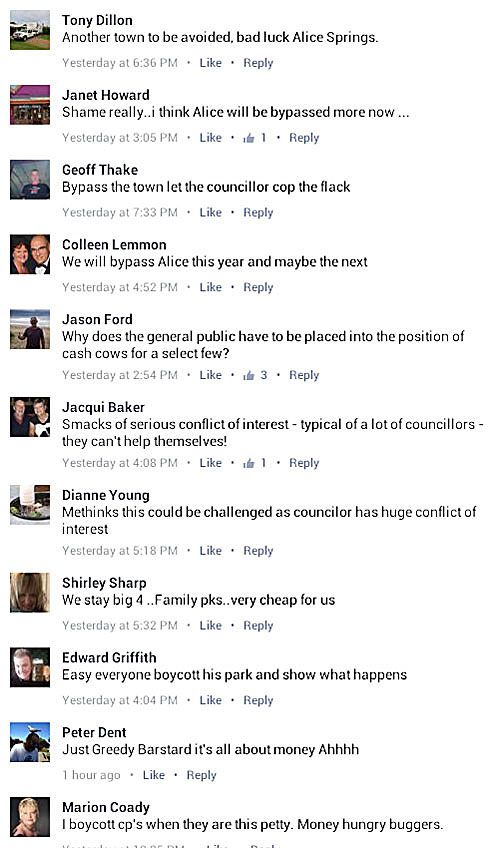