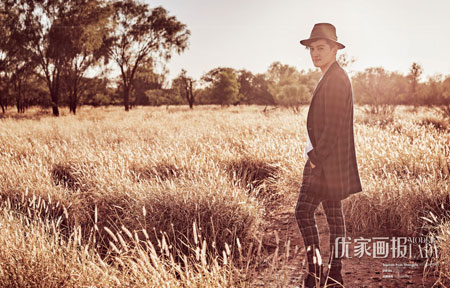 Tourism NT has sent out a palpitating media release about a publishing coup that “will deliver mass exposure for the Territory” through a fashion magazine, showcasing “the breathtaking backdrops and unique experiences on offer”.

The problem is, several photos of the “supermodels” in Modern Lady show them surrounded by the weed buffel, famously brought in – partly by the CSIRO – to suppress dusts, but having spread throughout The Centre to the massive detriment of native flora.

Buffel is a declared noxious weed in South Australia, but successive NT Governments have refused to act.

Another snap shows one of the models on a dirt road unlikely to invite anyone interested in embarking on a pleasant drive.

Nevertheless, the release says: “Chinese superstar Hu Ge, and rising supermodel Wang Xin Yu have visited the Northern Territory for a top-secret magazine shoot that will help attract more Chinese tourists to the NT.” Secret, we’re told, so they won’t be mobbed. 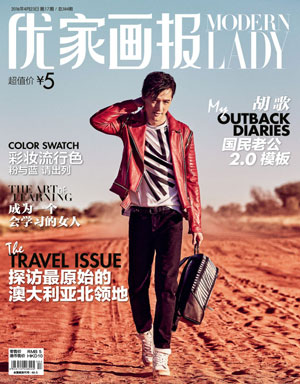 However, there are also images of Old Ambalindum Homestead, Ellery Creek Big Hole and Simpsons Gap.

The release says: “Investing in ‘Modern Lady’ we expect to significantly raise the awareness of the Northern Territory as a holiday destination.”

We have asked Tourism NT how big that investment was, requested an English transcript of the stories and asked, given that we’re selling ourselves as nature Territory, why did no-one point out to the journalists that we have hundreds of marvellous native plants, and point them in the right direction for some meaningful coverage?

We’ll publish the response from TNT when it comes to hand.

The five day magazine shoot involved a crew of 16, which Tourism NT supported with $45,000.

This is a significant return on investment for Tourism NT with the three magazine covers and 9-page travel feature to be seen by millions of Hu Ge fans and Modern Lady magazine readers in China.

The magazine is a Chinese publication therefore is in Mandarin only.

The photo shoot was captured at the Kangaroo Sanctuary, Old South Road, Old Ambilindum, Simpson’s Gap and Ellery Creek Big Hole. The shoot locations were chosen by the Chief Editor of Modern Lady.

All images selected to appear in the feature were chosen by the Chief Editor of Modern Lady to appeal favourably to the readers of the magazine and to a Chinese audience.