Warren H Williams, one of the writer-directors of the ICTV series Our Place, on set at Amoonguna.

It was standing room only at Witchetty’s for last Friday’s preview screening of Our Place and other recent productions made in Amoonguna by Indigenous Community Television (ICTV). People from the community just south of Alice Springs had turned out in force to watch themselves and their families in dramas adapted from their lives, filmed in their place. A strong crowd of non-Indigenous locals had also come.

The recognition factor ­– their aunty, their little cousin, themselves – drew bursts of hilarious laughter from the audience as did the jokes, while you could have heard a pin drop during the moving performance by Thomas Big Bear Saylor, a singer-songwriter of TSI and Warlpiri descent, whose music features in the productions and who directed some of them. It was sheer enjoyment to be in this audience for the occasion. 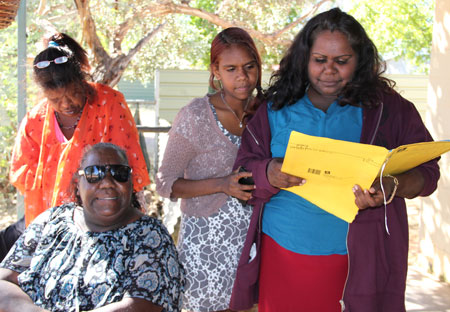 The productions are made for broadcast on ICTV, seen on Channel 601, VAST (Viewer Access Satellite Television), an Australian Government funded service for people in remote areas who may not be able to access digital television. The service is not yet available in Alice Springs although it should be later this year. In the meantime, there is an online streaming service for ICTV’s extensive video library, much of it contributed by people in communities.

Right: Some of the cast of Our Place, including the irrepressible Marie Elena Ellis (bottom left), who helped host Friday’s preview, and Sherene Williams (Celine) holding her script.

Over the past three years ICTV have moved into producing content and at Friday’s showcase, they appealed to the audience to support their crowd funding campaign – target $10,000 – to finish work on the drama series Our Place. All four episodes have been shot, two have been completed. The Pozible funds will be used to complete the third episode, while a grant is being sought to finish the fourth. Government and non-government sources have also provided funding to make films about specific issues, such as gambling, a theme featuring strongly in Friday’s program as the central focus of two short films as well as part of the story in the first episode of Our Place.

Although the message of the short films was perfectly clear – that not every gambler can win and that for those who lose, the impacts on themselves and their families can be damaging – the stories felt fully fleshed, not simply in service of the message. Performances, by Amoonguna locals, were thoroughly engaging, the settings in their homes and in and around the community, authentic. 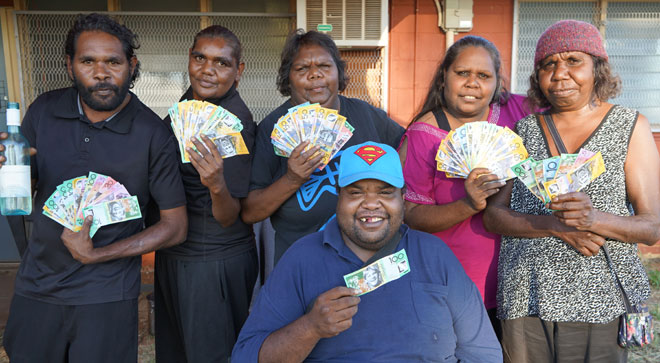 Above: Thomas Big Bear Saylor with the cast of Happy Birthday – that’s play money in their hands, produced by the ICTV art department.

Particularly impressive were Sherene Williams as the mother in Happy Birthday and Adrian and Jamie Nelson who played her children. The scene when they miss out on a decent meal and a birthday treat for one them because she has gambled away the food money is poignant indeed. Cleverly, the film doesn’t end on that sad note, but with a visual gag that delighted the audience while also driving home the message. (I won’t spoil it by saying more.)

In Lucky Billy we see a young man (Jamie Nelson, below centre), a talented footballer, dash his own dreams by gambling away the money his indulgent grandparents have given him for football boots. Again, despite the serious message, the film ends with a humourous scene much appreciated by the audience. 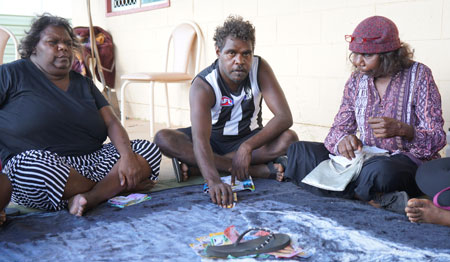 Musician Warren H Williams and young film-maker Micha Bartlett have the writing and directing credits for Our Place. In a promotional short Williams says the intention of the series is to show, in contrast to the impressions given by much external media coverage, that people can be happy on communities. Nonetheless, the episode we saw of Our Place was frank about the corrosive impact of heavy drinking and the pressures drinkers bring to bear on people trying to stop.

In the fictional community of Alangkwa Valley (with setting provided by real life Amoonguna and surrounds, including Alice Springs) we see Celine, who has made a big effort to stop drinking, entrusted with the hard-won dollars to pay for her father’s coffin and food for the ‘sorry time’. Under pressure from her cousin she takes that first sip that can be the undoing of many a reforming drinker. The ramifications are numerous, for herself and the whole family. Sherene Williams is again very convincing as Celine; indeed the whole cast is effective, as is the story-telling and direction of this episode and the short films. I was particularly moved by the simple scenes evoking the new solitude being experienced by Celine’s bereaved mother, played with quiet presence by Janelle Jacobs.

ICTV sees Our Place as their flagship drama series, appealing to their core audience but also to a wider audience, showing life in an Indigenous community beyond the miserable stereotypes, revealing with a lightness of touch the richness, the relationships, the resilient humour while also honest about the difficulties people can experience. On the strength of the first episode they have succeeded.