Road ahead not clear for owner-operators 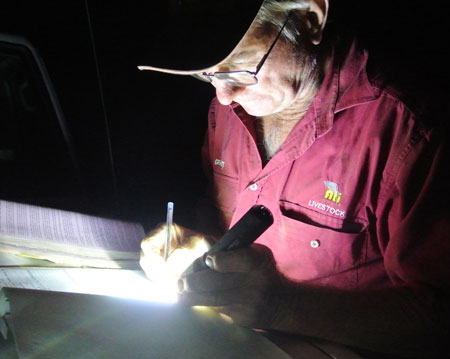 A 600 horsepower Kenworth pulling two B-doubles, more than 50 meters long, 102 cattle on board, 2000 litres of diesel in the tanks, and Grant Petrick at the wheel: The 135 tonne rig is setting off across half the continent on a 1600 km journey from Alice Springs to Murray Bridge.

The Centre born and bred owner-driver is sure about getting the cattle in top shape to their final destination: They are big and strong, the product of a good season, bringing near record prices, well over $3 a kilo on the hoof, around $4.50 dressed. The cost of transport is around $110 a head, according to veteran stock agent Jock McPherson.

Mr Petrick is less sure about the future of his small business on 62 wheels. It is home (its sleeper berth equipped with a king-size single bed, fridge, aircon, microwave and video), office and place of work for much of his life. Although the Road Safety Remuneration Tribunal, an initiative of the former Federal Labor government, has been knocked on the head by the Turnbull government for the moment, it is likely to rear its head again during the election campaign.

ABOVE RIGHT: A day in the office for Mr Petrick. In fact this one is on the bonnet of a Toyota, after loading cattle at Owen Springs. In two days of driving with him, apart from attending to his logbook, I did not see him making a single note from dozens of business calls on his mobile. Filing facts in your head is clearly one of the many skills an owner-operator needs.

“They are trying to get rid of us,” says Mr Petrick. “It is a membership drive for the Transport Workers Union (TWU). The majority of owner drivers are not members. It’s easier for the union to deal with big companies and their employees most of whom are are union members.”

Alice Springs News Online put that to the TWU. A spokesperson said: “We will pressure whatever Government is in power to look at the evidence of the link between safety and pay for drivers, as a major factor posing risks to safety.”

But Mr Petrick, other drivers and cattle industry people I spoke with when I joined him on the trip as a co-driver (I have a Multi Combination driver’s licence) are at a loss to see the link between owner drivers paying themselves higher wages, and road safety. 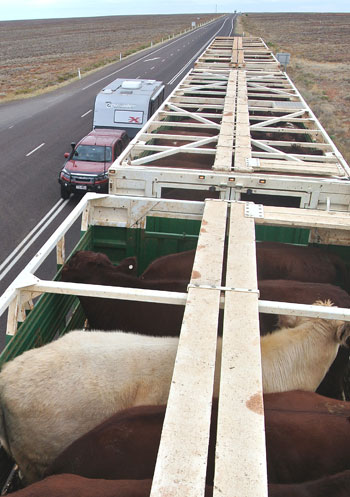 In the early evening we top up the load with 18 cattle from two yards on Owen Springs, NT Government land just south of town. It’s impossible to get the full rig close enough to the first loading ramp. Mr Petrick has to disconnect one B-double, load the cattle, and re-connect it for the final nine head to be loaded just down the road.

It’s 9pm when we get back onto the bitumen and begin our journey.

I’ve been on the South Road dozens of times. One is inclined to grizzle about poor rest stops, many of them strewn with rubbish, dirty or absent toilets encouraging travelers to make alternate arrangements near-by.

But when it’s all said and done, that 2700 km strip of seal between Port Augusta and Darwin opens up The Centre for people driving any kind of vehicle. It is a marvelous asset, very literally a way to the beauty and romance of our region.

I remember well the abysmal dirt road south of the border before the mid-80s, which made the heart of the nation a no-go area for motorists with anything less than a very robust car or 4WD. You wouldn’t have dreamt of putting a caravan on it.

On our trip Mr Petrick and I encountered dozens of grey nomads, traveling mostly in daylight, heading north in what will soon turn into a flood of caravans and mobile homes, bringing dollars for that other great export industry of Central Australia, tourism.

But on our night trip we have the road almost entirely to ourselves. The excellent sound insulation of the cabin reduces the engine and running noises to a hum. The magnificent vastness of the country and the star sky are all around us. It’s a great time to think.

Or chat. It seems so far as the nation’s 70,000 owner-drivers are concerned, to link the level of pay to road safety is a long bow. If they are obliged by law to pay themselves more money, they may well put it straight back into the bank to minimise interest costs on the loan or mortgage they are likely to have.

So why are there persistent claims by Opposition politicians, repeated unchallenged by the majority of media, that more money would modify the safety behaviour of owner drivers – if indeed it needs modifying?

I put this to the TWU which replied in part (the full text is here): “At the moment there are no minimum rates for owner drivers.

The sun rises from the edge of the desert.

“What the [Road Safety Remuneration Tribunal] Order did was pay owner drivers a minimum rate based on what it costs to run their truck and pay themselves a wage for all the time they work.”

That means the tribunal, had it been allowed to start operating last week, to be effective, would have had to be in a position of telling some of the country’s biggest companies what they must pay the truckies, including Woolworths and Coles.

And yet even that wouldn’t have stopped any unscrupulous operators from continuing their practices and pocketing the difference.

Already the industry operates under the most stringent regulations which are extensively policed. 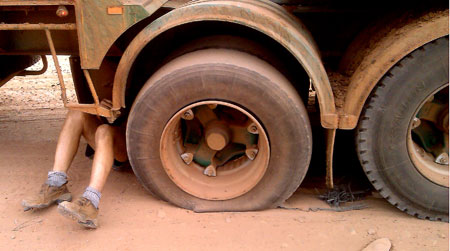 This is some of what is regulated by the “work diary for drivers of fatigue-regulated heavy vehicles,” which has to be filled in daily and carried in the vehicle:–

An air house came off one of the axles, locking its brakes. 20 meters on and four tyres were destroyed. Fortunately this happened in a yard and not on the road.

• Responsibility for managing driver fatigue. It is shared by parties who have control over the transport task. Parties “in the chain of responsibility” include a consignor, consignee (that already includes the food chains and the growers and manufacturers who are their suppliers), loading manager, loader and unloader of any goods transported by the vehicle.

Says the TWU: “What the [Road Safety Remuneration Tribunal] Order would have importantly done is hold the clients at the top of the supply chain to account for these rates – not the transport operator in the middle which is often getting the squeeze put on them from the top. Major retailers Wesfarmers [which owns Coles],  in their annual report from 2015 showed freight costs reduced by $13 million – this at a time when their business is booming and profits are at record levels.”

Back to the regulations:–

• Stationary rest time means the driver is out of the vehicle or in an approved sleeper berth of a stationary fatigue-regulated vehicle.

• Work time is not just driving, it means driving and inspection, servicing or repair work; attending to the load or passengers; loading and unloading; cleaning or refueling; recording information in a work diary or other document; performing marketing tasks; supervising or helping another person performing any of these tasks.

Court imposed and infringement penalties under the Heavy Vehicle National Law and Regulations may exceed $20,000. 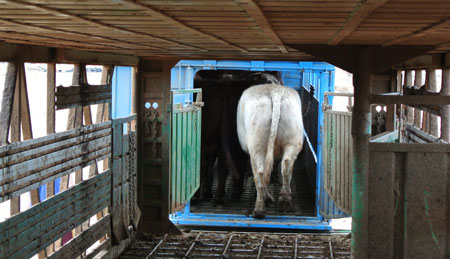 We see the last of him: At Port Augusta we had to transfer the cattle from one of our B-doubles to another for the trip to Murray Bridge. Two B-doubles as a single road train are not permitted past Port Augusta.

The driver told me the dash-mounted display of the system was working fine before the officers attempted to connect their hand-held display unit, wriggling and pushing the plug vigorously.

They couldn’t get it to work. They gave the driver a defect notice and a fine. Immediately following that encounter the dash-mounted screen indicated the system was faulty.

All this sets up a merry cat-and-mouse game with the drivers tipping each-other off via CB radio, on Channel 40, about police locations, whether weigh bridges are open, and other strategic intelligence.

The road ahead, soon after turning right at Port Augusta, on the way home.

Says one truckie: “Do they tell a bricklayer when to lay bricks, when to have a break and when to have a night rest? No, they don’t. And yet a house built by a shoddy bricky can collapse and kill everyone inside.”

Only 20,000 owner operators – fewer than 30% of their total number – are members of the TWU. It’s a safe bet that a Federal Labor government would bring back the Road Safety Remuneration Tribunal.

Would that be a blow to the outback can-do attitude so convincingly embodied by Grant Petrick?