Developments today are the heritage of tomorrow

With the title Rediscovering the Alice, I was expecting a film unearthing some forgotten corner of the town’s past. I was in for a surprise and I expect most of the Heritage Festival audience were too. They had gathered for the screening at the National Pioneer Women’s Hall of Fame, with a panel discussion to follow, asking what is ‘heritage, and what are ‘heritage places’. 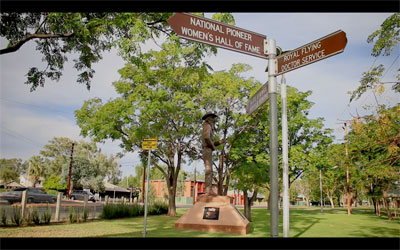 That the film-makers’ take on these questions would not be conventional became immediately obvious.  The four – Erika Hamilton, Maxim Buckley, Tales Pizziolo and Otis Gold – zeroed in on two subjects that could be counted on to divide the local conversation. One is more obviously associated with the features of the town typically celebrated by the Heritage Festival – the commemorative statue of John McDouall Stuart. The other, though, is almost the antithesis – the military base at Pine Gap.

Having bitten off controversy, however, the film-makers proceeded with a very even-handed approach.

On the statue, they interviewed two women who are offended by it, but also the man behind its creation and gifting to the Town Council.

Margaret Kemarre Turner OAM spoke to them, together with Leonie Palmer, on the occasion of International Women’s Day when the statue was light-heartedly brought on side with a skirt and parasol. 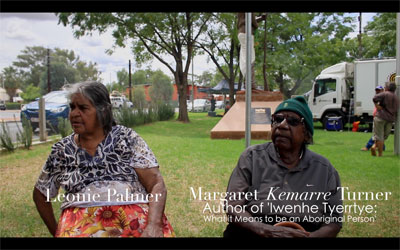 Mrs Turner said she didn’t knowing anything about Stuart until the statue came along. What she has learned since is that her people helped him as he passed through the country, showing him water sources, but they were also scared, by the strangeness of the horses for instance, and then at Mount Hay they were shot at.

Her objection to the statue focussed particularly on having it standing in the middle of the town with a gun, looking like something from a war zone. If he had a book in his hand, that would be different.

Les Pilton, a long-standing Freemason and Central Australian, said he had canvassed people very widely about his intentions with the statue and had received a resounding yes to his proposals. For him it was about celebrating Stuart’s legacy, which he described as “success through perseverance”; it was not about “trampling on people”.

The film-makers stepped away from the conflicting viewpoints without trying to tie them off neatly, other than to acknowledge that Stuart will always be part of The Centre’s history. Their point, it would seem, is that at present this divided conversation is the heritage conferred by the statue. 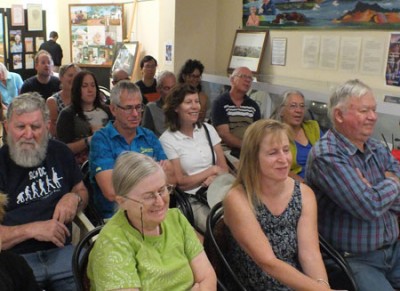 It represents two different takes on The Centre’s history, even though former MLA Loraine Braham would like to think only one is possible. She urged them to go see the play, Journal, being performed again at Stuart Town Gaol this Sunday. That tells the “true” story of Stuart, “not what you’ve got there,” said Mrs Braham.

Historian Dick Kimber was also in the audience. He acknowledged Mrs Turner as a “fantastic woman” but said that there was no “clear evidence” of how many people were shot during Stuart’s expeditions, there was “some possibility” of it, but “no certainty”. However, he also allowed for other stories, saying an “Ah Chee family member here might disagree with that”.

On the space base the film-makers didn’t shy away from a frank description of its purpose – its involvement in the (lethal) drone program in the Middle East, for instance. But their interest was more in its significance for Alice Springs, in terms of revenue and infrastructure but also community. 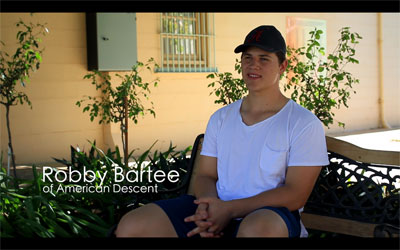 One interviewee was a young American, Robby Bartee, who has spent his life between Alice and the US, but feels that Alice is his “home town”. He feels conscious of its Indigenous culture as he has “native American blood”. Otherwise he didn’t see “that much difference” between the Australian and American cultures.

Pursuing a balanced coverage, they film-makers also interviewed a young Australian, Ruby Marshall, who has largely grown up in town. She observed that American people are welcome in the community, and that if the base were closed and they all left, it would have a huge impact on the town, in particular on its economy. She noted the local celebration of Halloween as one way Americans have stamped their culture on the town. She said people would be interested to know what goes on at the base, but she didn’t seem to sense objection to it.

For more political takes the film-makers may have had to seek out interviewees from an older generation. Wrapping up, they said Pine Gap is part of not only this town’s heritage, but global heritage. 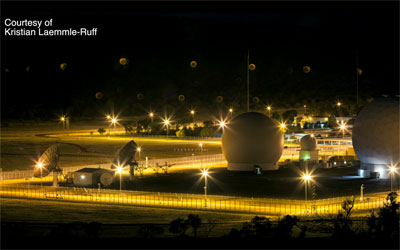 The discussion that followed was as interesting as the film. The film-makers revealed, for instance, their earlier intention of including the possible radioactive waste management facility at the Date Farm south of town in their discussion. If established, it will certainly leave an inheritance for future generations. They had to abandon this idea when the owner of the Date Farm pulled out, which they noted entirely without rancour. For despite being prepared to choose confronting topics, they were at pains to say they did not want to offend anyone.

Erika Hamilton also opened up a discussion on being labelled a “young person”. She has found it frustrating to be called upon as the “young face” of an issue or organisation. Recent school-leavers, they all felt quite strongly about this, seeing it as a way of demeaning their input, of not taking them as seriously as they deserve to be.

Note: Stills from the film were supplied by Tales Pizziolo. The images the film-makers used of Pine Gap were provided by the artist Kristian Laemmle-Ruff, who coincidentally is one of the highly commended finalists  in the Alice Prize, showing at present at the Araluen Arts Centre.