CLC leaders returned; only one woman on executive

Yuendumu film-maker Francis Kelly and Papunya musician Sammy Butcher have been returned as chair and deputy chair of the Central Land Council by delegates from 75 remote communities and outstations across southern NT meeting at Yulara Pulka near Uluru. 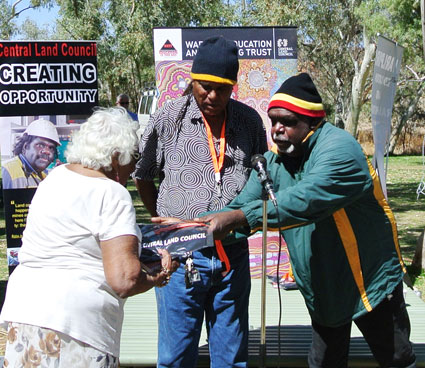 Right: Mr Kelly (centre) and Mr Butcher at the 2015 launch of Every hill got a story. Photo from our archive.

“I’m very grateful to the delegates for allowing me to finish the job I began in 2014,” Mr Kelly said.

Two positions for women were reserved on the Aboriginals Benefit Account (ABA) Advisory Committee, which advises on the expenditure of the royalties-equivalent-funded ABA community grants program. They were won by Valerie Martin and Barbara Shaw.

Phillip Wilyuka, Harry Nelson and Kelvin Morrison were also voted onto the committee, making a total of five, although the federal Indigenous Affairs Minister plans to cut two of the CLC positions in favour two hand-picked experts.

“The minister already has the final say and often overrules our advice. It’s time he handed responsibility for Aboriginal money back to the elected representatives of Aboriginal people,” said Mr Kelly, a former ABA Advisory Committee member.

“Aboriginal voters in the Territory will not stand for more top-down control over income they want to use to strengthen their communities. It should be our priorities that count, not the governments’.”