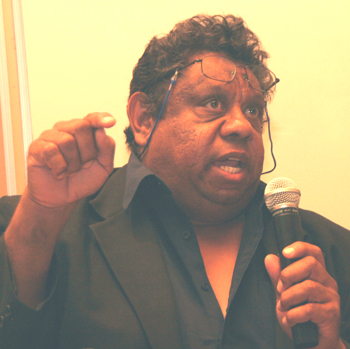 Getting a slice of town council rates, being the controlling body of the proposed Indigenous cultural centre, charging the Power Water Corporation 5% of the value for works in Alice Springs and transferring ownership of public housing to its tenants – these are apparently proposals for the local native title organisation, Lhere Artepe Aboriginal Corporation (LAAC).

Although the text is mostly difficult to understand, the proposals are contained in a 49 page “strategic plan” written by the Executive Office Manager of LAAC, Ken Lechleitner (pictured), who also runs a consultancy, Two-ilpa Bi-Cultural Consultancy. Mr Lechleitner, who speaks a number of Aboriginal languages as well as English, is often called upon in the community to interpret and mediate. He has been a legal educator for CAALAS and undertook a community liaison role for the Royal Commission into Institutional Responses to Child Abuse.

Disaffected members of LAAC provided Alice Springs News Online with a copy of the plan, dated November 2015, on condition that they not be named. They claim that Mr Lechleitner had no mandate to write the report, for which they say he has been paid handsomely.

They also say that his appointment was invalid because the meeting deciding it did not have a quorum.

They say a complaint has been made to the Anti Discrimination Commission, and a trespass order has been taken out against some members.

It is clear that the three moieties making up LAAC, Antulye, Irlpme and Mparntwe, (which the report abbreviates as AIMs), have again entered a phase of bitter conflict similar to when Daryl Pearce ran the organisation (google our stories on this site).

Mr Lechleitner did not respond to requests for comment from the Alice Springs News Online.  A staff member, answering the Lhere Artepe office number, quizzed the News on our sources (whom we did not disclose), said she would pass our message on to Mr Lechleitner, then said “we can’t give any statements” before hanging up.

This means we have been unable to discuss the exact meaning of his plan, due to be in force for two years, and we are here publishing extracts verbatim.

“LAAC to also establish MOU or Contract with PAWA about a levy of 5% to any future PAWA construction works.”

“LAAC to develop and Regional volunteer work for the Dole Scheme in building your own homes for participants.”

“LAAC to establish more ILUA [Indigenous Land Use Agreements] to stimulate revenue possibilities for its own organisation and its members.”

“LAAC to participate in all other Committee and subcommittee in the development of this Alice Springs region.”

“LAAC to opens up new sub-divisions for future revenue and food production areas.” 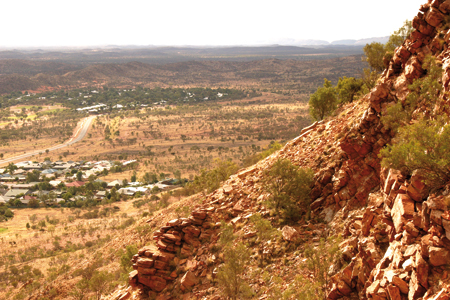 “LAAC to participate in Civil Construction planning and have an influencing decision making, in shaping this Town and its population  growth.”

“The business partnership together present a whole new outlook, because, it can develop and design the way forward in all reconciliatory notion of contractual arrangement between people work together to meet a common shared outcome. With invested interest in each other’s presents now and well into the future.”

Where are our stories going to be kept? asks the plan. An MOU “with CLC and Strehlow Research Centre and the Desert People Centre to have own storage space. Or simply select your own area of land to become the storage site for both Females and Males. The other option is to negotiate hard with Northern Territory Government in regards to getting the Cultural Centre set up here and LAAC has a managing role that will select stakeholders by contract to do the work on their behalf.”

“Where is our ceremony ground of the future? Currently there is nothing selected for this but there are places used incognito according to cultural discreetness. But in going forward the need to flag the area is a must to ensure such place is keep for its purpose in the future. Otherwise is can run the risk of being compulsorily acquired.”

“The one other option is to use the land that LAAC has current ILUA over the Desert Knowledge Precent, so therefore have opportunity to develop New LAAC Headquarters and still use the current location as meeting place for all the AIM’s to use in the evening for their meetings.”

“Where are the selected sites for our ceremonies to take place? The need for AIM’s Estate Groups and its members to secure own land for future use and development, need to be chose soon and work towards developing it.”

A response from Mr Lechleitner will be published if and when it comes to hand.