Whittling away at sacred sites protection 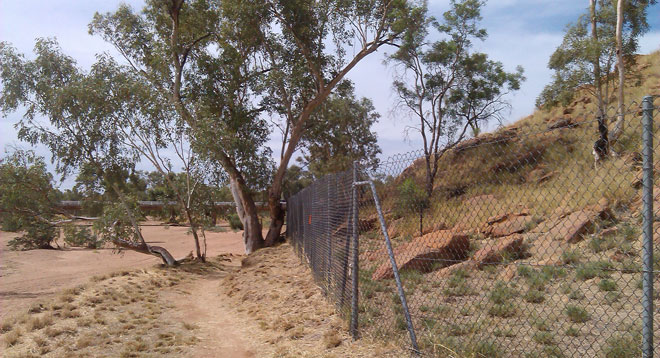 Above: The tree to be sacrificed is the slender twin-trunked tree in the middle. Formerly it would have been protected.

A tree on the eastern bank of the Todd River (a recorded sacred site) will be sacrificed in the works to put in a boardwalk skirting Tharrarltneme (Annie Meyer Hill, a registered sacred site).

The Aboriginal Areas Protection Authority (AAPA) certificate for the works allows for the removal of the tree. In a previous certificate, issued for similar works that commenced in 2005 and ended in court action for breaches of the certificate, this tree would have been protected, being certainly much higher than 1.5 metres.

In the cover letter for the new certificate AAPA CEO Dr Ben Scambary writes: “I understand that the proposed removal of this single tree was deemed acceptable to the Aboriginal custodians of the sacred site because it allowed the specific proposed works at this location to work sensitively around other significant mature River Red Gum Trees associated with sacred site 5650-378 and to minimise any potential impact on the rocky outcrops associated with sacred site 5650-5.”

For “work sensitively around” read “put the boardwalk between”.

Although the tree is relatively small, it is described in Dr Scambary’s letter as “mature”, the word used to designate the key features of Sacred Site 5650-378, to wit, “mature River Red Gum Trees within and on the banks of the Todd River.”

He writes of the tree to be sacrificed: “Any work to remove the single smaller mature River Red Gum Tree shall be conducted in such a manner so as to ensure that no damage is caused to the long term health of any other sacred mature River Red Gum tree that is to be retained.” (Emphasis added.) 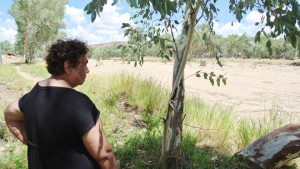 To get the boardwalk approved, the name of the game is clearly ‘compromise’, the lesson that custodian Doris Stuart and family have refused to learn, for which they have been sidelined. Their fears of weakened protection for sites seem justified when the previous and current certificates are compared.

Left: Doris Stuart standing next to the tree to be sacrificed.

The old certificate specified exclusion zones around the mature river red gum and coolibah trees on the site. The trees’ maturity was established by a specified measurement of their trunk diameter or their height. No works were allowed within a four meter radius of these trees.

Any works between four and six metres had to be carried out by hand tools, and no vehicles could be parked nor materials stockpiled in that 4-6m zone, the point being to “minimise root damage and changes to the natural water supply and drainage”.

Temporary tree protection fences had to be erected around the trees for the duration of the works and were required to be not less than four metres from the trunk of the trees.

This kind of precision is missing from the new certificate.

The language is now more general. Judgement of what is a safe exclusion zone for trees is left up to the applicant – the Department of Infrastructure (DIS) – who “shall install above ground Temporary Protection Barriers at a distance to afford all mature River Red Gum trees and rocky outcrops the greatest protection from damage during the conduct of the specific proposed works.” (Emphasis added.) 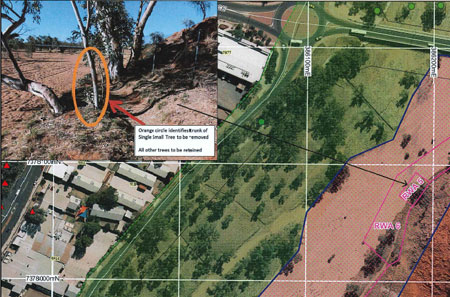 It will also be left up to DIS to seek professional advice on the possible impact of the works on the health of trees: “… should the applicant require it, the advice of a suitably qualified arborist shall be sought to ensure that any works to be conducted in the vicinity of any sacred site trees … are conducted in such a manner so as not to harm the long term health of any such tree.” (Emphasis added.)

Right: Detail of the colour-coded annexure to the new AAPA certificate, identifying the tree to be sacrificed.

The new certificate does not specifically prohibit vehicles on the site, although it notes “access via the Todd River bed”. The certificate does not specify the use of hand tools in any zone. It does, however, exclude the stockpiling of “earth materials, gravels or construction equipment” from “the immediate vicinity of any mature River Red Gum tree”. There is no precise definition of “immediate vicinity”.

The old certificate restricted excavation or grading within the protected area to not more than 15 centimetres in depth. There is no such restriction in the new certificate.

In its description of the proposed works the new certificate refers to posts for the boardwalk being concreted into the ground, with no further conditions specified for this activity other than the general conditions that damage shall not occur to the trees and specified rocky outcrops.

The area for carrying out he proposed works appears to be on the western side of the existing track, on the bank and down into the river. On the eastern side, where the hill starts to rise, the new certificate precludes any works, specifying the necessary protection of a rocky outcrop and a rocky ridge.

But in two other restricted work areas, the conditions for the protection of rocky outcrops are weakened. The new certificate says works shall be carried out so as to “minimise any disturbance”. (Emphasis added.)

The Northern Territory Aboriginal Sacred Sites Act 1989, which governs the activities of AAPA, is currently under review. One of the purposes of the review is to “reduce red tape”. The Stuart family are worried that the apparently weaker provisions of this new certificate are a sign of things to come. Does reducing red tape mean there will be a greater impact on sites?