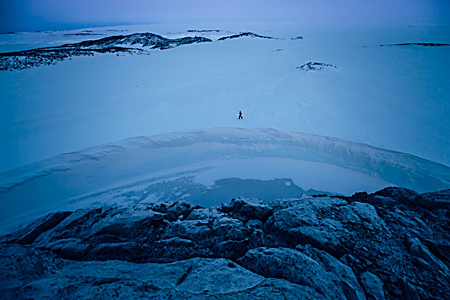 Jumping from the freezer into the furnace is how water advocate Mina Guli describes her 250 km run “in the Simpson Desert” under way right now, after completing last week 189 kms in the Antarctica (pictured), “the world’s largest and driest desert”.

Actually she’s not doing the usual Birdsville to Mount Dare crossing of the Simpson, but pounding the dirt around its edges, on the Old Andado Road, near Trephina Gorge, Ross River, John Hayes Rockhole and Arltunga.

Today she’s running near Titjikala, and Chambers Pillar is on the program for tomorrow.

All up Melbourne-born Ms Guli, an environmental lawyer and CEO of Thirst, will be running 40 marathons, seven deserts, seven continents, in seven weeks to raise awareness of water scarcity.

She says it is “the number one problem facing society” according to the World Economic Forum: “By 2030, global demand for useable water will outstrip supply by 40 per cent. 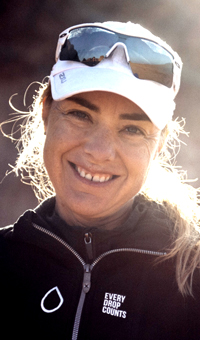 “On average, 92% of total global water consumption is nearly all used in food production, while only 8% is accounted for by domestic water use, such as drinking, cleaning, washing, and for the production of industrial products such as steel, paper and clothing.

“The issue of water scarcity may feel bigger than you as an individual but everyone can make a difference through making pledges in their every day lives, whether its walking to work, drinking beer rather than wine, skipping a chocolate bar or eating chicken rather than beef – small changes in attitude by consumers can help to influence corporate supply chains and save vast amounts of water.”

Her running feat is astonishing: “Having broken my back at 22 years old and being told I would never run again makes this leg of the challenge particularly important to me,” she says.

Each run will vary in distance with land temperatures expected to be between minus 23°C and 38°C. In each country Ms Guli intends to run the equivalent of one marathon a day for six straight days.