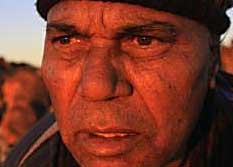 He says between the turn-off from the Stuart Highway and the Papunya turn-off at Napperby, part of the road is single lane which “has suffered this summer. Bitumen has been patched up and is bubbling up, creating dangerous road conditions.

“The biggest problem are the deep verges on the side of the bitumen,” says Mr Kelly.

“There are too many broken windows and cars rolling when drivers lose control as they make way for other cars or passing trucks.”

He says a child received facial injuries on a school bus being side-swiped by a truck.

The road is also used by tourists going to Western Australia and by road trains servicing the Granites gold mine.

Meanwhile Chief Minister Adam Giles has announced the highway is one of four NT projects that have been recognised as nationally significant in the Australian Infrastructure Plan released by the Federal Government yesterday.