Home Issue 1 Blackout: When will we get new generators?
Issue 1Volume 23

Blackout: When will we get new generators? 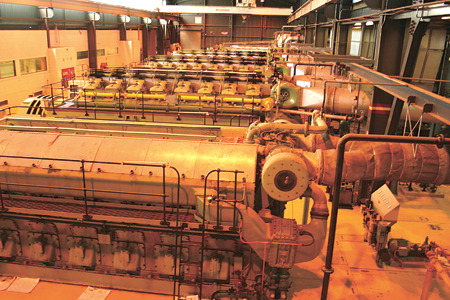 The government issued “works specifications” last year to expand the Owen Springs power station which would allow the shut-down of the noisy Ron Goodin plant, adjoining to the posh Golf Course residential estate.

But preparations for a new plant seem stalled although the 44MW capacity would match that of the Ron Goodin facility (see at right).

And it was the Ron Goodin station, according to Territory Generation, where the problem last Saturday started – and got out of hand.

Ten years ago Power and Water said the piston engines (pictured) would be at the end of their life right now – some of them a lot sooner.

The plant has been the subject of enduring controversy over the years, with residents complaining about noise and emissions, especially when a turbine set was placed outside the generating hall (google our site).

Yet instead of replacing the old “reciprocal engine” driven sets, it appears, they are being patched up and pressed into service when peak load is required.

It appears one of the old engines failed but it is not clear why that triggered a chain reaction that shut down power all across the town.

No coherent explanation is available from the government but a well informed source says that losing an engine should not bring down the whole network – yet it did.

The source says the generators are all over town, approximately in this configuration:–
• Five piston engines at Ron Goodin delivering about 6MW each.
• The turbine at Goodin (15MW)
• Owen Springs: 3 x 12MW turbines.
• Central Energy at Owen Springs (turbines delivering 8MW).
• Solar – about 6MW.

All motors, including the piston ones, are running on gas from Palm Valley.

Solar can be a problem, says the source, because when it reduces output, an engine-driven plant needs to pick up the slack, often at the drop of a hat.

The biggest use of power in town is pumping water which, on a hot day, is under huge stress as the air-conditioners crank up all over town.

Last Saturday, says the source, pretty well anything that can make electricity would have been going flat out.

To start a “black station” the alternators making power need to operate as starting motors to crank up the engines – and that, of course, needs electricity. When you don’t have any, things look bleak. Apparently some motors can be started with compressed air.

Rather than giving a coherent explanation the Government dishes out motherhood statements: “The NT Government understands that the blackout over the weekend caused great inconvenience to residents of Alice Springs.

“We’ve done an enormous amount of work over the past six months on a strategy to increase the reliability and efficiency of the power system in Alice Springs and we continue to work with Territory Generation to find the best solution for customers and industry participants.”

It seems the government has a long way to go.

“Ron Goodin Power Station is approaching the end of its working life.”

“The project shall be delivered under an engineering, procurement, and construction (EPC) contract with a date for commercial operation of 2017,” says the document.

“The project design life shall be 25 years and responses will be evaluated on a whole of life cycle basis.

“The power station shall be a standalone installation and shall not rely on services from the adjacent existing power station except where explicitly defined.

“The fuel source is natural gas only sourced from a number of different fields and supplied via pipeline to the site.

“The power station shall be designed to operate automatically, continuously, safely and without engine damage on all of the fuel gas sources under all site climatic conditions whilst connected to and supplying power to the Alice Springs network.”

It is not known what is happening with that project.

An investigation is underway into the “system black” which saw power supply in Alice Springs fail for more than six hours last Saturday, says Minister for Essential Services Willem Westra van Holthe who ordered “an immediate investigation following the outage, with an interim report due within seven days.

“The current situation is completely unacceptable, with several outages in the Alice Springs region over recent months. We’ve seen major disruptions which have caused inconvenience to households, businesses, government agencies and other service providers.

“I will not be satisfied until we discover the cause of these outages and develop an action plan to ensure power supply failure isn’t a regular occurrence in Alice Springs.

“On Saturday evening I directed Territory Generation to provide an interim report on the issue, along with a detailed final report within 28 days including how the problem can be solved.

“Territorians deserve answers and the Northern Territory Government will ensure they get them,” Mr van Holthe said.