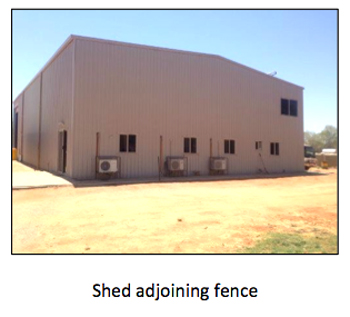 The owners of a rural residential block say its value has dropped $65,000 as a result of their neighbours getting permission to run an industrial operation.

“Who will compensate us for that loss caused by a Territory government decision?” asks Ross Copland who with his wife, Angela, fought tooth and nail to stop the running of a plumbing business next-door to their land, in Petrick Road.

The application was opposed by 37 objectors – mostly rural residents – and only five were in favour.

It seems nearly all of the supporters – nearby residents – will now also cop a drop in the value of their land.

Yet the Development Consent Authority (DCA), which has five local members and a Darwin-based chairman, decided in favour, and the Lands Minister Dave Tollner signed off on it.

A similar situation is now brewing in the Ilparpa area, and there are dozens of rural blocks where uses brazenly in contravention of regulations are taking place.

However, the Department of Lands disclosed two days ago that it “does not have legal powers to prosecute under the Planning Act. The DCA has those powers and will be considering the [Ilparpa] matter and appropriate action in a closed session of the meeting”.

The reconsideration of the valuation of the Coplands’ block took place at their request. They had argued all along that the use of the block next-door would depress real estate values in their neighbourhood.

They were told this month by the Valuer-General, John Love, that the “unimproved capital value” of their two-hectare block is now $300,000.

Mr Love had appointed an independent valuer and took his advice.

The Darwin-based contract valuer had reported that the Coplands claim they are “now located in Industrial zone even though Devt. [the development] is approved under RL zone”.

He writes that there is “evidence that shed on adjoining block detracts on the underlying land value of the subject block.

“The only defined or ‘known’ reason which could detract from prudent purchasers of NTP1892 [the Coplands’ block] is the historical public negativity of the proposal … and for this it could be argued that a 10% reduction may be warranted.”

In fact Mr Love slashed the value by more than 20%.

Objectors had argued that the application was in contravention of the government’s  Planning Scheme which defines home based contracting as “the storage on the site of a dwelling of materials and/or vehicles associated with a business operated by a person resident in the dwelling, but which business does not operate from the site of the dwelling”.

PHOTO: “That shed” featured in the controversial development application, as pictured in the valuer’s report.

DECLARATION OF INTEREST: The writer is a resident in the neighbourhood which is the subject of this report.