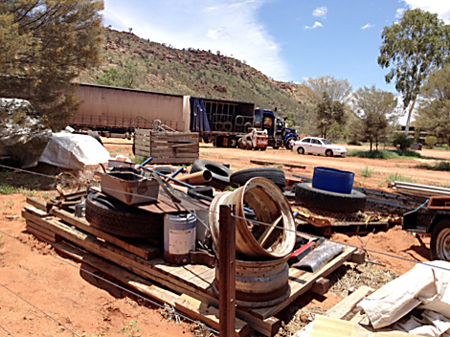 Neighbour is being pitted against neighbour once more as a result of government failure to regulate rural residential land use.

Since October 2012 a couple living on a block in Ilparpa, Sue Richter and Roger Thompson, have been drawing the Lands Department’s attention to activities on the block next door.

They allege illegal use of that land by clearing, dumping garbage, using it as a transport depot for road trains and various noises resulting from industrial-style activities.

But their present neighbour, Grant Petrick, says he bought the block in November last year for the specific purpose of living there and parking at his home the major tool of this trade, his road train.

He says he discussed his plans with Lands Department officials in Alice Springs and was told all would be fine: as he understood it, he was entitled to run his business from home.

Mr Petrick says implied in that permission, clearly, was that he would be able to drive his road train onto the land, and be able to do a U-turn on the block and drive out again onto Ilparpa Road, which is a road train designated thoroughfare.

However, in Mr Petrick’s view the existing gate wasn’t safe to use, as to turn into it the road train had to cross over Ilparpa Road, potentially into the path of other traffic.

This brought the town council onto the scene: Anything that happens between the fence and the road is under council control – and Mr Petrick put in a new driveway without permission.

While over Christmas rains created ideal conditions for building the track and compacting the dirt surface without throwing up dust, no-one was on duty at the council to issue the necessary permit. 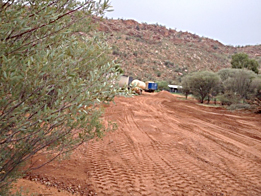 So, says Mr Petrick, he was in a situation where he could not, without causing traffic problems, drive home.

As has been the case repeatedly, the failure of regulators to intervene, or to permit uses that are contrary to regulations and expectations of other residents, is again turning neighbour against neighbour.

The Alice Springs News Online has sought comment from Lands Minister Dave Tollner, asking whether his resignation would now be appropriate. An aide has told us the department will be furnishing a reply.

Ms Richter and Mr Thompson have today made a further complaint, putting to the department a litany of what appear to be breaches of regulations, many of them predating Mr Petrick’s acquisition of the block.

They say: “From 2012 to 2016 we made many complaints to the Department of Lands Planning and Environment [about] excessive clearing, dust creation, industrial activity etc.

“Contrary to promises from the department [no] investigation has been conducted other than to provide the previous owner with the Department’s regulations.

“Importantly, the violation of regulations continues to get worse and seemingly ignored.  In these four years, despite our ongoing complaints, three quarters of the vegetation has been cleared for industrial actively which increasingly infringes on our Rural Living.”

Ms Richter and Mr Thompson write in their complaint that from December 30, 2015, “there has been heavy machinery working on the block, clearing large areas of remaining vegetation, making roads and other earthmoving tasks.

“An extensive area of the property was cleared including the verge, for the construction of a road and second entrance.  This was done without consent from the Alice Springs Town Council and the Town Council acted on it.”

Mr Petrick counters no work inside the block was done that wasn’t needed for the intended use of the land, a use for which he considered he had departmental consent.

Speaking to the Alice Springs News Online he said this was no different to other trades people working from their rural residential land – alluding to the controversy of a plumbing business now being run from a rural residential block in Petrick Road – with Ministerial permission.

“As well, there is an extensive pile of mess, piles of tyres and old cars extending within sight of our living area. There are visible road train trucks, small trucks, petrol tankers, six or seven road train trailers as well as earth moving equipment,” write Ms Richter and Mr Thompson.

“We are concerned about the health and safety issues of the combustible liquid containers as well as heavy machinery, the disturbing noise, environmental damage, loss of vegetation, destruction of the verge, the damage to the road and violation of rural living regulations, all of which are covered by various government departments and authorities, but seemingly not acted upon, apart from the A

Mr Petrick says the “mess” referred to is something the previous owner is in the process of removing, having sought an extension of time from Mr Petrick. He says the “combustible liquid containers” were in fact water tanks.

He says he has a good relationship with his other neighbour, having offered to remedy his flooding problems by channeling water along the driveway that Mr Petrick no longer needs.

A spokesperson for the Department of Lands and Planning said the Department is investigating the matter and will report it to the Development Consent Authority (DCA) when it meets on February 10, 2016.

The Department does not have legal powers to prosecute under the Planning Act.  The DCA has those powers and will be considering the matter and appropriate action in a closed session of the meeting, says the spokesperson.