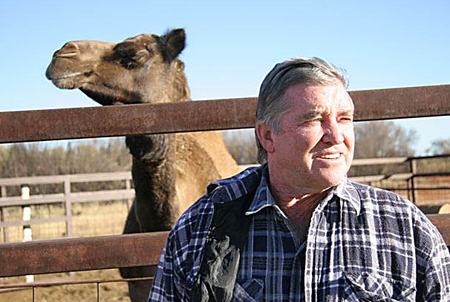 Camel penises and donkey hides for the China market and a global run on grass fed and organic beef: Bring it on, 2016, says veteran cattle man Gary Dann (at left).

Now they can fetch $200 in China, stripped of their hair and treated to provide a gel that accelerates the healing of women’s reproductive organs after birth.

The country’s abolition of the one-child policy is predictably going to raise demand.

A bowl of tiger penis soup, believed to heighten virility, costs around $400 in China. Mr Dann says his research has revealed that the Chinese will switch to camel penises: “We will eat any private parts,” he quotes his sources.

Given that we have a million camels in Central Australia, half of which can be expected to have penises, Mr Dann could be looking at a $200m market (give or take). That’s not counting the other edible or usable parts of a camel, nor the benefit of saving the world’s endangered tigers.

Somewhat little less exotic opportunities are presented by the skyrocketing demand for natural grass fed and organic beef, says Mr Dann: It’s what The Centre’s pastoralists specialise in. The advantages are culinary as well as health related, but the obstacles are complex.

A big point in favour of local cattlemen: Feedlot animals fed antibiotics to stimulate growth are likely to pass them on to humans who are eating the flesh, to the point of becoming immune to the drugs when they are needed to fight illnesses, says Mr Dann, echoing widespread concerns. 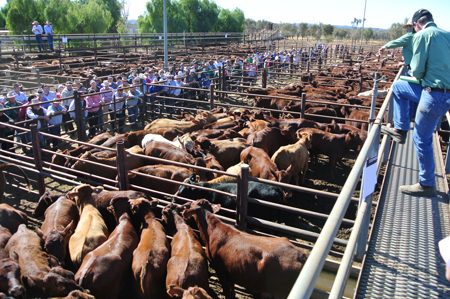 Secondly, cattle confined to feedlots produce meat that is reliably tender but bland in its taste.

“A cow in a pen walks five meters from a trough filled with feed to one filled with water,” says Alice Springs butcher Gerry Dale, from Larapinta Meats, who specialises in meat from grass fed cattle. “The rest of the time they lie on their bellies.

“And on their way they eat the best grasses and herbs which are absolutely natural,” says Mr Dann. “It could not get any cleaner.”

Several cattle stations in The Centre have undergone, at their expense, certification as organic producers.

“All our water comes from under ground, goes into a tank, into a trough. It’s good, fresh, clean water,” says Mr Dann.

Rivers can be contaminated. A farmer upstream could be using chemicals which, when drunk by cattle, could interfere with the organic status. No such risk of that in The Centre, he says.

At present we have the absurd situation where we send the excellent cattle we’re breeding here, 1500 km to South Australia, for slaughter there or further export, and we import beef that’s no better and mostly inferior, via a 1500 km northbound transport.

All this revolves around the local lack of full-time slaughtering – sorry, the politically correct term these days is processing – facilities in or near Alice Springs.

The old abattoir in Smith Street is long gone, and the Wamboden facility, leased by Mr Dann, some 30 km north-west of town, off the Yuendumu Road, is battling circumstances.

All this suggests greater support from the NT Government would make a big difference.

Chief Minister Adam Giles recently spent $1m on a weekend of burning rubber and fossil fuel, for the Red Centre NATS, something Mr Giles is now trying to justify with highly questionable attendance figure claims. A shot in the arm of this segment of the beef industry would provide a year-round benefit for rural jobs and consumers of beef.

The supply of cattle is intermittent, greatly depending on fickle rainfall and resulting feed.

He’s tried to compensate for this by also processing camels who can live in much drier conditions.

He says donkeys can be a good earner as well – see above – and their gene pool could be enhanced by importing male donkeys from Spain. Donkeys can also handle dry conditions.

They and camels would be even more feasible if their supply could be enhanced by Aboriginal enterprises rounding them up, in a multitude of locations throughout The Centre.

A key factor for getting tasty and tender beef is avoiding stress and excess production of adrenaline during the transport and slaughter of the cattle.

The best piece of beef this writer has ever eaten came from a young cow peacefully grazing on Narwietooma, killed instantly with a shot to the head by Chris Connellan, and after dressing, being hung for a couple of days. 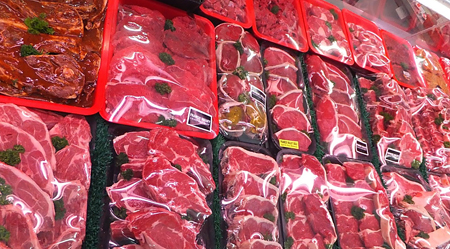 Peter Nelson, of Milner Meats, (its selection of grass fed beef is pictured) prefers grass fed cattle, but will supply lot fed beef if requested – as most restaurants, for example, do.

He raises them on a farm he owns in the south-east of South Australia. From there it is a short distance to the processing facility at Strathalbyn.

When the cattle get there they are kept for a day in a yard with feed and water, allowing them to get over the stress of the transport – albeit very much shorter than 1500 kms.

The carcass is then road-freighted in a chiller truck to Alice Springs for butchering.

Of course, Mr Nelson would switch over to Wamboden in the blink of an eye if it were fully operational: “The best beef is from around Alice Springs, when the country is good,” he says.

“The grass and natural herbs here are even better than most pasture fed cattle are getting elsewhere.”

It’s not easy to determine how much organic beef is sold in Alice Springs by supermarkets.

Coles did not return our calls. Woolworths did but after an exchange of emails we’re still not clear how much beef they are selling in Alice Springs that has been produced from cattle that have been fed additives, such as hormones and antibiotics, nor what the split-up is between grass and grain fed cattle (free-range vs feedlot).

This is part of our email thread on December 24:

NEWS at 11:13: I’m doing a story on beef and I wonder what kind of beef – free range grass or grain (lot) fed, for example – you are selling mostly at your supermarket in Alice Springs. Where does the meat come from? Is there a declaration on your shelf product what additives (if any – such as hormones and antibiotics) have been fed to the animals?

WOOLWORTHS at 12:08: We do not use additives in our beef products. [We provide] a variety of beef products in our supermarkets which all prove popular with our customers. Our own brand beef is sourced from multiple areas around Australia, and we stock a mixture of grass and grain fed depending on the season. I am unable to provide a breakdown by percentage, I am afraid.

NEWS at 13:23:   Thanks for your reply but you misunderstood my questions. Is there a declaration on your shelf product what additives (if any – such as hormones and anti-biotics) have been fed to the animals? Over the year, what are the percentages for grass and grain, respectively?

WOOLWORTHS at 13.35: I’m told that no additives are used. I am unable to provide a breakdown by percentage I am afraid. As I mention, we stock a variety of beef products because our customers demand choice when shopping.

NEWS at 14:27:   My question is not: Is Woolworths putting additives into the beef? Please confirm that what you are saying is this: None of the cattle from which the beef is produced that Woolworth sells have been fed any additives, including hormones and anti-biotics.

WOOLWORTHS at 15:31: I know our own brand Macro grass-fed beef is additive free and is PCAS accredited. We also adopt the MSA grading system for all of our own beef in store. Unfortunately I am unable to source further information for you at this time I am afraid. [We added the links.]

This leaves it unclear what the break-down is of Woolworths’s “own brand Macro grass-fed beef” and any other beef they sell, and what the split-up is between grass fed and feed-lot animals. If Woolworths provide further details we will publish them. We will also report the position of Coles if it is communicated to us.

STOCKYARD PHOTO: These prime cattle are going south because a permanent abattoir isn’t available in The Centre.