Almost $120,000 was “misappropriated” from the industry representative body Tourism Central Australia, which receives most of its funding from the NT Government, some time since 2010.

This was revealed in the organisation’s annual report delivered to members at the AGM this week.

The annual report, prepared by general manager Jaclyn Thorne (pictured above, right), says a police investigation is now under way, but gave no explanation why the apparent theft had not been discovered before except to say “it was the 2014/15 Financial Year when the suspected issue ‘crystallized’ into a proven misappropriation.

“The Committee and Management are actively working to rectify this financial position in the 2015/16 Financial Year which will also be assisted if there is any recovery of misappropriated funds.”

Chairman Dave Batic (at left) said: “It was through the skills-based TCA Executive Committee that identified an issue with the Supplier Funds account in the Balance Sheet in February 2015.

“This issue was immediately raised with Deloitte, our audit partner, and subsequently in October 2015 an independent forensic accounting investigation was undertaken.

“Through this process, it was uncovered that funds had been misappropriated as far back as 2010 and up until mid-2015,” Mr Batic said.

Mr Batic said in his report: “Our industry is buoyant, innovative and resilient which has been demonstrated in the past decade when visitation has been in decline.

“In 2015 we experienced significant growth in sales at the Visitor Information Centre, an increase in visitation to Central Australia and a whole host of major events in Alice Springs which saw one of the busiest periods the town has seen in a very long time.” 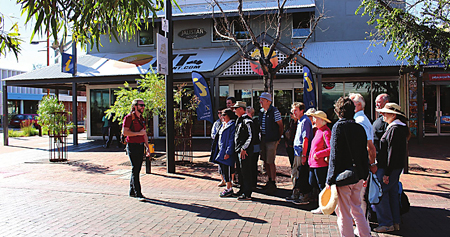 Despite a 7% decline in the foot traffic at the visitors centre (at left), now in Todd Mall, which “welcomes over 115,000 people each year … staff managed to increase tour bookings and retail sales.

“In fact the retail offering grew 46% from 2013/14 to 2014/15 which can be attributed to staff training, retail consultancy and customer service measures implemented,” says Mr Batic.

Promotions included the Central Australian Characters Campaign 2014: “This intra-territory campaign featured 14 characters over a nine month period on television, radio and in print discussing their love for Central Australia and  encouraging both locals and visitors to  ‘discover’ the region,” says the report.