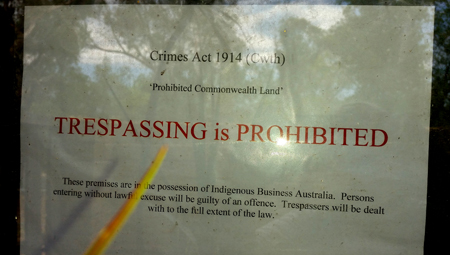 Indigenous Business Australia, which financed the purchase of the house in Sadadeen from which mountains of rubbish were removed this week, says it has 71 loans in Alice Springs.

IBA is now the owner of the house, as signs fixed to the building suggest (see photo). Quoting the Commonwealth Crimes Act, the signs say “These premises are in the possession of Indigenous Business Australia” and warn trespassers.

Asked about the budget of the IBA and its sources, a spokesman said: “82% of IBA’s $190million operating expenses are self-funded with $34 million is received as revenue from the Australian Government.”

The spokesman said “IBA will not be providing any further comment” and did not respond to these questions: How much did IBA lend the buyer? (We don’t give the address.) Are there any problems with any other properties?

Meanwhile the police have given us the following information about the occupants of the house: “There have been no reported incidents of any type for this address since June 2015.

“Previous to that there have been numerous incidents reported at this location, many of which relate to noise and domestic violence.

“Police have responded on most occasions and have made arrests for a variety of reasons including domestic violence, breach of domestic violence orders and breaches of alcohol protection orders.”