Not all is sweet in bush bakery 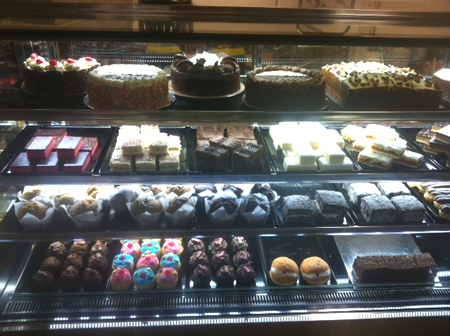 An irate reader sent us this photograph of a display in the new, government supported bakery in Yuendumu: Surely, this is not in line with the purpose of the taxpayer funded initiative, the reader said.

However, Darren Clark, of Remote Food Solutions, which is linked with the Wicked Kneads bakery in Alice Springs and manages the outlets in Yuendumu, Hermannsburg and Papunya, disagrees.

He says all dough for the sandwiches, wraps and rolls baked in the bush communities is high fibre and a diabetic range of cakes will replace the ones with a lot of sugar.

“You can’t be telling people what to eat,” says Mr Clark.

“The communities own the shops. They need to be competitive. Sweets are available in other outlets there, out of the freezer.

“And besides, Coca Cola has been sold for ages in these communities. No-one seems to be complaining about that.”

The three shops, which provide fresh rolls, pies and pasties low in salt, will soon launch bakery training for 12 people each.

“Improving the food security in remote Indigenous communities would be expected to have far reaching and long-term health and economic benefits for people in these locations, notably the burden of diet-related chronic disease.”

A spokesperson for the Department of the Prime Minister and Cabinet says: “The Australian Government funded the construction of the bakery in Yuendumu.

“The Government has not sought to control the way the bakery operates, nor does it intend to subsidise its ongoing operation and as such, it has to be a commercially-viable business.

“However, the Government understands the bakery will shortly be offering sugar-free options and other healthy food products such as tubs of fruit.

“The Government also understands the bakery is exploring the possibility of offering healthy pre-made meals.”